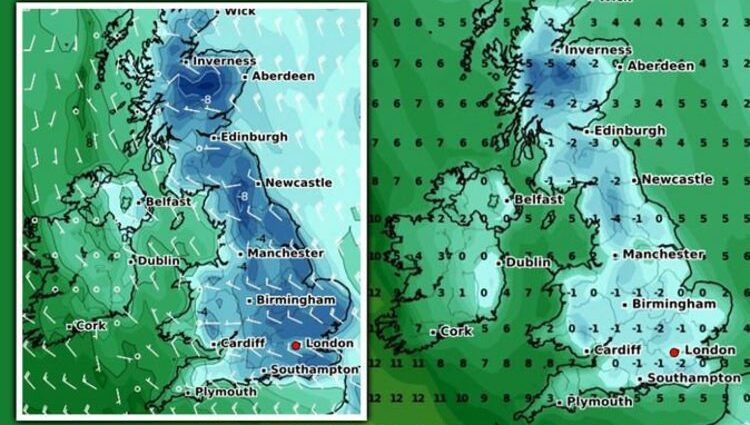 The UK is soon to be hit with a sub-zero arctic blast, with icy winds forecast for the final week of November. According to WXCharts, the forecast for November 30 shows wind chill reaching -10C in parts of central Scotland, while the rest of the UK feels icy blasts as cold as -8C.

The areas surrounding Newcastle, Leeds, Edinburgh and Birmingham are all set to be hit by the icy winds.

In London, wind chill temperatures are set to reach between -4C and -8C.

Meanwhile, actual temperatures are forecast to drop to between 0C to as low as -5C across the UK.

Inverness will see the coldest weather, meanwhile London and the surrounding areas are still forecast to be sub-zero.

The Met Office’s long-range weather forecast says that it will “feel rather cold” across the UK, “with overnight frost likely”.

The cold weather may also bring snowfall with it, as maps forecasting the final week of November have shown snowfall across Northern regions of the UK.

The heaviest snow is due to hit Leeds, Carlise, and parts of Scotland, with up to six inches (15cm) of snow in these areas.

Meanwhile, maximum gust speeds across the UK are set to reach 42mph (67kmph) on November 29, according to WXCharts.

The cold blast is predicted to reach the south by Wednesday night.

For the period November 25 to December 4, the Met Office says: “Through Thursday a band of rain clearing from the southeast during the day, with patchy overnight mist and fog ahead of it.

“Likely to be brighter to the north, with blustery showers in some coastal areas.

“Showers may be wintry in upland areas in the north.

“Tending to feel rather cold.

“As the period continues winds will be typically from the north and northwest allowing cold conditions to persist.

“High pressure is likely to sit to the south or southwest of the UK, bringing possible rain and showers to the north, wintry on high ground and perhaps at lower levels at times.

“Likely drier in the south, often largely settled with clear/sunny spells. Rather cold at times, with overnight frost likely.”

Lates News:
2021-11-21
Previous Post: EU is accused of paying Lukashenko over Belarus migrant crisis
Next Post: This Is The Country Where Rush-Hour Costs The Most