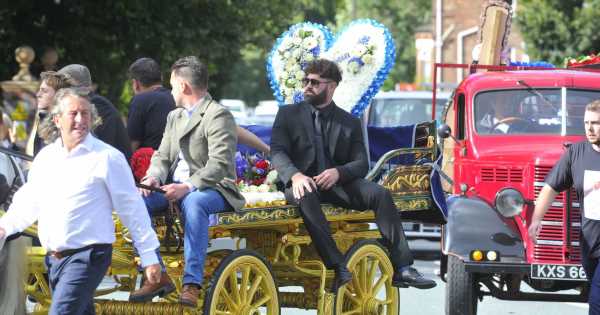 Tyson Fury's killed cousin has been laid to rest after an elaborate horse-drawn carriage procession.

As a suspect awaits trial for the alleged murder of Rico Burton, 31, his funeral was held at a church in Urmston, Greater Manchester on Thursday, Manchester Evening News reports.

Devastated world champion boxer Fury spoke out against knife crime following the attack but not be seen among the knife victim's friends and family walking on the road in unison to the service.

Several men could be seen wearing matching t-shirts with Rico's face printed on them in a touching tribute on the emotional day almost two weeks since he was fatally stabbed. The 31-year-old was outside a bar in the Goose Green area of Altrincham in the early hours of the morning of Sunday, August 21 when knifed to death. Liam O'Prey, 21, has been charged with his murder.

Today (September 1), Mr Burton's family and friends bid an emotional goodbye to him. A service is taking place at St Michael's Church in Urmston.

Pictures showed mourners arriving for the service earlier on carriages and trailers. One was being pulled by a horse.

Photos also showed one trailer carrying a huge, white floral arrangement for him, while another carried flowers that spelt out his name. Dozens are expected to turn out to pay their respects to Mr Burton at the service.

Speaking to the Manchester Evening News after his passing, Shaun Egan, who previously coached Mr Burton alongside his brother Steve at Jimmy Egan's Boxing Academy in Manchester, described him as 'such a nice lad'.

"He was an absolute talent," he said. "He was such a nice lad, he was hard working and had a great sense of humour.

"What's happened is just awful. He was just a great guy. To hear he has died like this is devastating." For more shocking stories from the Daily Star, make sure you sign up to one of our newsletters
here

Mr O'Prey is accused of murder; unlawful wounding with intention to cause grievous bodily harm; possession of a bladed article; namely a knife; and possession of cocaine. He could go on trial at the beginning of next year.

He has been remanded into custody. A 17-year-old was also seriously wounded in the incident and was given 'life-saving' treatment at the scene, police said.