Pictured: Gary Cooper leaving the court after an earlier hearing in March

Gary Cooper, cousin of boxing champion Tyson Fury, admitted pushing England international Smalling when he ran on to the pitch after Arsenal scored a penalty during the match at the Emirates Stadium.

Cooper, 30, was slapped with a 12 month community order and must carry out 120 hours of unpaid work. The father-of-three was also banned from all football matches for four years and ordered to pay a total of £335 – £100 of which will be given to Smalling as compensation.

Cooper was arrested shortly afterwards at the ground on Sunday March 10.

He was caught on camera shoving the 29-year-old centre back and was later charged with common assault.

Arsenal fan Cooper, of Chertsey, Surrey, previously admitted entering into the playing area during the match.

He had denied a charge of assault, but changed his plea to guilty at the start of his scheduled trial at Highbury Corner Magistrates Court today.

Eleanor Fraser, in mitigation, said: ‘Smalling was not injured.

‘The contact was also made only once – it was brief, just a single blow.

‘It was clearly a matter of excitement where he lost control, his intention was to celebrate and congratulate them.

‘But, before he knew it, Smalling was in his path.’

Demi Ugurtay, prosecuting, said: ‘There was contact with Mr Smalling.

‘He does accept there was contact. There is CCTV from the stadium that I will show to the court.

‘This behaviour is unacceptable. He has run into the pitch after Arsenal scored a penalty at 6pm.’ 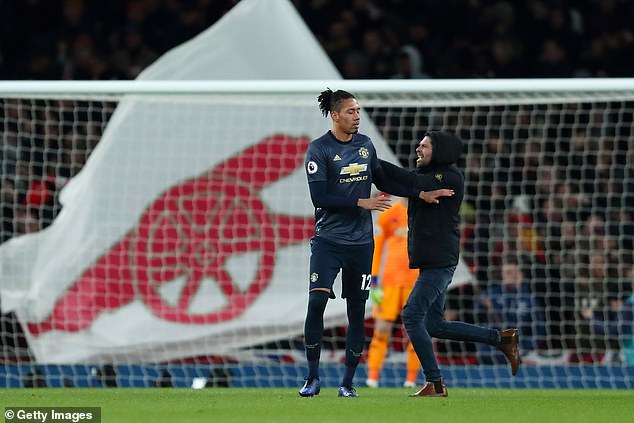 The footage showed Cooper run on to the pitch and shove the footballer, before he was escorted away by security.

Cooper lost his job as a decorator after the incident – which was witnessed by more than 60,000 fans and millions of people watching on TV around the world.

The pitch invader now claims benefits after being sacked from his £500-a-week job at Innovation Decorators.

In a statement read to the court, Cooper said: ‘I accept I was present at the Arsenal v Manchester United Game on March 10.

‘In my excitement, I lost control and run onto the pitch after Arsenal scored a penalty.

‘I was particularly excited because Pierre-Emerick Aubameyang had missed a penalty the week before and scored this week.

‘My sole objective was to celebrate with the players on the pitch and congratulate them.

‘I did not run on the pitch to confront any Manchester United player and had no intention of approaching Chris Smalling. 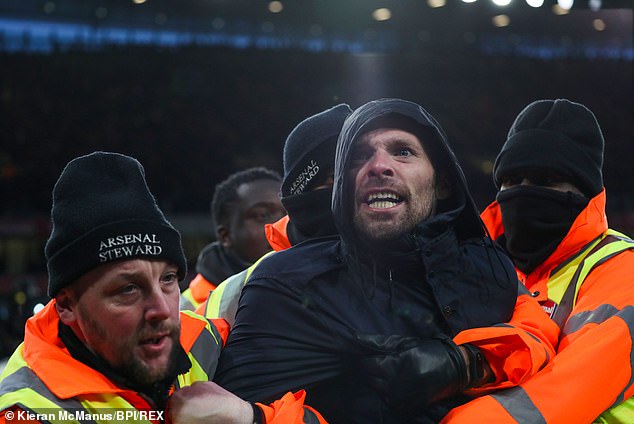 Gary Cooper, 30, was arrested shortly after invading the pitch at the ground on March 10.

‘But before I knew it, in my overexcited state he was in my path.

‘No injury was caused to Chris Smalling. The Arsenal players hugged me and I managed to celebrate with them as my sole intention.

‘I apologise for my behaviour.’

Ms Fraser, in mitigation, said: ‘He used to attend the games with his friend who died four years ago.

‘He is also a father-of-three. Because of his family involvement his presence has declined.

‘He was given the ticket at the last minute. He felt like his friend was next to him at that moment. He felt that he won the World Cup himself.

‘As an Arsenal fan for his entire life, the banning order is a punishment himself.

‘The conviction has been a huge punishment, he has received abuse in the streets because of the footage.

‘He has had taunts every day. He has lost his job at Innovation Decoration, earning £500 per week on a permanent contract.

‘He was the sole breadwinner of the family. It has brought the shame he cannot provide for his family. He has now had to claim benefits.’

It was heard that Cooper was handed a reprimand as ‘a youth’ but had no other convictions.

‘This must go outside the guidlines.

‘This is serious, the potential for disorder was widespread and it was beamed across the world.’

The court heard Cooper had downed eight pints of beer before invading the pitch.

Arsenal went on to win the match 2-0.