AKCAKALE, Turkey (Reuters) – Turkish troops and their Syrian rebel allies attacked Kurdish militia in northeast Syria on Wednesday, pounding them with air strikes and artillery before launching a cross-border ground operation that could transform an eight-year-old war.

The assault began days after U.S. President Donald Trump pulled American troops out of the way, prompting denunciations from senior members of his own Republican Party who say he abandoned the Kurds, loyal allies of Washington.

“The Turkish Armed Forces and the Syrian National Army have launched the land operation into the east of the Euphrates river as part of the Operation Peace Spring,” the Turkish defense ministry tweeted after nightfall, following a day of pounding the area from the air.

Reuters journalists on the Turkish side of the frontier watched as explosions struck Tel Abyad. After dark, the red flare of rockets could be seen fired across the border into Tel Abyad, and flames burned near the town. A witness reached by telephone said civilians were fleeing en masse.

Explosions also rocked Ras al Ain, just across the border from the Turkish town of Ceylanpinar, according to a reporter for CNN Turk. The sound of warplanes could be heard above and smoke rose from buildings in Ras al Ain, he said.

The assault on the Kurds – for years Washington’s main allies on the ground in Syria – is potentially one of the biggest shifts in years in an eight-year war that has drawn in global and regional powers. The Kurds played a leading role in capturing territory from Islamic State, and now hold the largest swathe of Syria outside of Bashar al-Assad’s government’s hands.

Trump’s decision to pull forces out of the way was denounced by some Kurds as a “stab in the back”.

Trump called the Turkish assault a “bad idea” and said he did not endorse it. He expected Turkey to protect civilians and religious minorities and prevent a humanitarian crisis, he said.

But one of Trump’s closest allies, Senator Lindsey Graham, said failing to support the Kurds would be “the biggest mistake of his presidency”.

Representative Liz Cheney, a Republican hawk, said: “The U.S. is abandoning our ally the Kurds, who fought ISIS (Islamic State) on the ground and helped protect the U.S. homeland. This decision aids America’s adversaries, Russia, Iran, and Turkey, and paves the way for a resurgence of ISIS.”

Turkish President Tayyip Erdogan, announcing the start of the action, said the aim was to eliminate what he called a “terror corridor” on Turkey’s southern border.

European and Arab countries called on Ankara to halt.

Turkey had been poised to enter northeast Syria since the U.S. troops who had been fighting alongside Kurdish-led forces against Islamic State started to leave.

A Turkish security source told Reuters the military offensive, dubbed “Operation Peace Spring”, opened with air strikes. Turkish howitzer fire then hit bases and ammunition depots of the Kurdish YPG militia. Turkey says the YPG, the main component of the U.S.-backed SDF, is a terrorist group linked to Kurdish insurgents that have fought in Turkey for years.

The artillery strikes, which also targeted YPG gun and sniper positions, were aimed at sites far from residential areas, the Turkish source said.

The SDF said military positions and civilians in the city of Qamishli and the town of Ain Issa – more than 30 km (20 miles) inside Syria – had been hit. 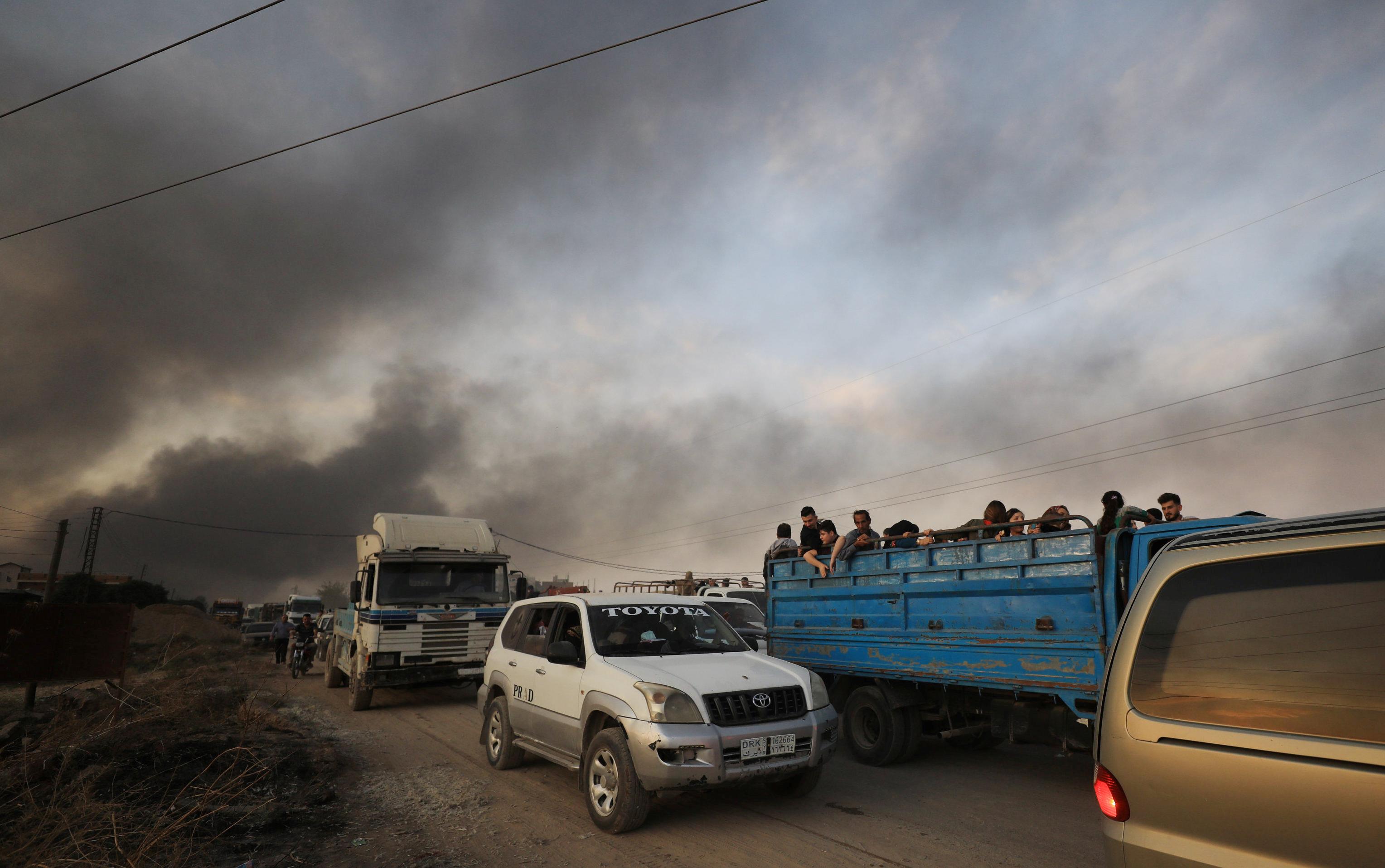 Turkish media said mortar and rocket fire from Syria struck the Turkish border towns of Ceylanpinar and Nusaybin. There were no immediate reports of casualties there.

World powers fear the Turkish action could open a new chapter in Syria’s war and worsen regional turmoil. Ankara has said it intends to create a “safe zone” in order to return millions of refugees to Syrian soil.

In the build-up to the offensive, Syria had said it was determined to confront any Turkish aggression.

It halted operations against Islamic State because of the Turkish offensive, two U.S. officials and a Kurdish source said. One of the officials said U.S. training of forces in Syria had also been affected. Washington aims to train tens of thousands of SDF fighters to stabilize the former Islamic State areas.

The United Nations Security Council will meet on Thursday at the request of European countries.

The Kurdish-led authority in northern Syria declared a state of “general mobilization” before calling on its people to head toward the border “to fulfill their moral duty and show resistance in these sensitive, historic moments”.

Erdogan’s communications director Fahrettin Altun said Turkey had no ambition in northeastern Syria except to neutralize the threat against Turkish citizens and to liberate the local people from what he called “the yoke of armed thugs”.

Turkey was taking over leadership of the fight against Islamic State in Syria, he said. 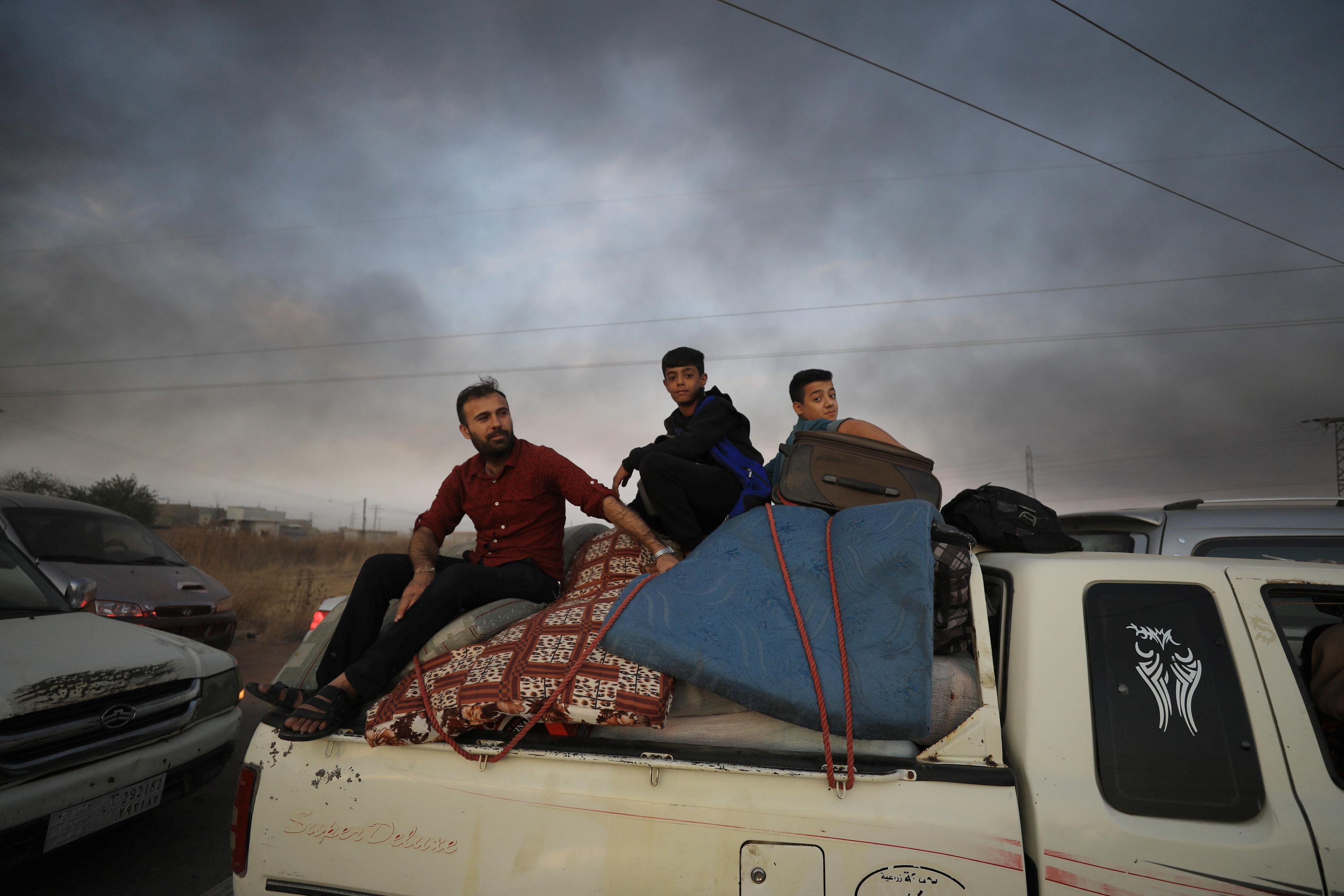 Turkish-backed Syrian rebels had traveled from northwest Syria to Turkey in preparation for the incursion. “Strike them with an iron fist, make them taste the hell of your fires,” the Syrian National Army rebel group told its fighters.