Trump deploys extra 1,500 troops to the Middle East in a ‘protective capacity’ as tensions grow with Iran

Donald Trump said he is deploying an extra 1,500 ‘protective’ U.S. troops to the Middle East after mounting tensions with Iran, the White House notified Congress Friday.

The president said they were being sent because ‘we want to have protection.’

‘Some very talented people are going to the Middle East right now, and we’ll see what happens,’ Trump said.

He was speaking as he left the White House to begin travelling to Japan where he and the first lady are taking part in a state visit this weekend.

The precise details of where the forces will go and what units are being deployed was not immediately disclosed. Sources told Reuters they included engineers.

The forces would number ‘roughly’ 1,500 and would deploy in the coming weeks ‘with their primary responsibilities and activities being defensive in nature,’ according to a copy of the notification obtained by The Associated Press.

Their mission would include protecting U.S. forces already in the region and ensuring freedom of navigation, the notification said. Officials said members of Congress were notified following a White House meeting Thursday to discuss Pentagon proposals to bolster the U.S. force presence in the Middle East.

Trump had warned on Thursday that he’s prepared to flood the region with American servicemen and women if he sees the need, after being briefed on 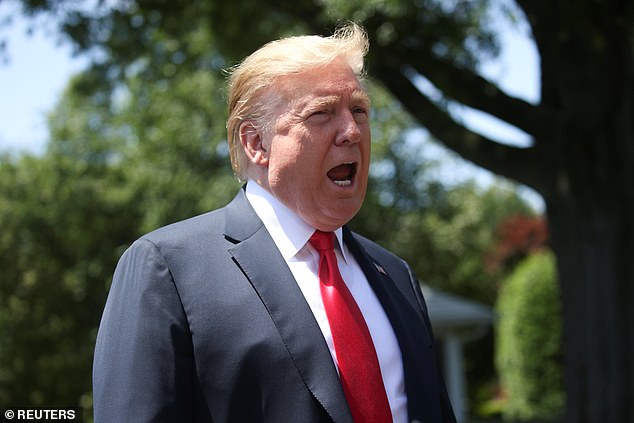 Deployment: Trump announced his 1,500 strong reinforcement of U.S forces in the Gulf region before leaving for his state visit to Japan 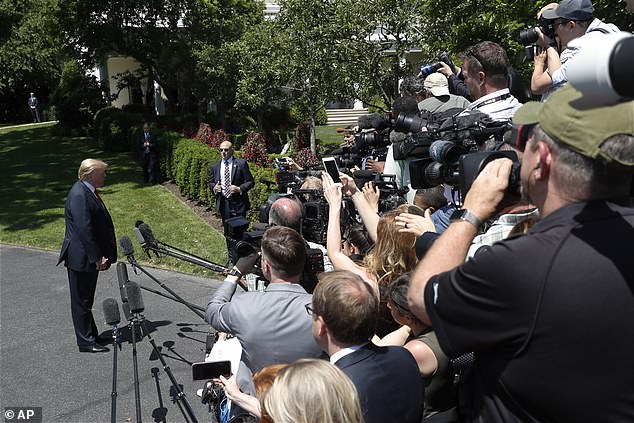 Escalation: Sources said Trump’s deployment included engineers but the exact make-up of what units are going and where remains unknown 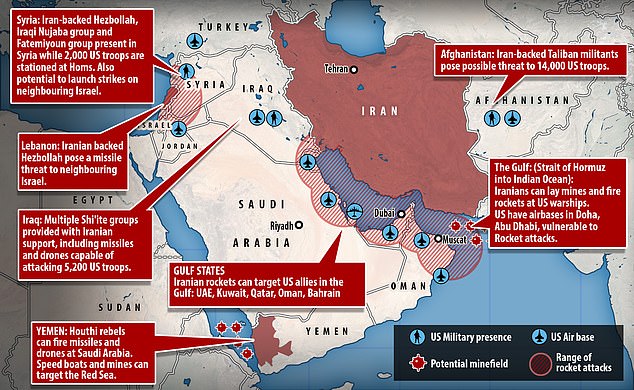 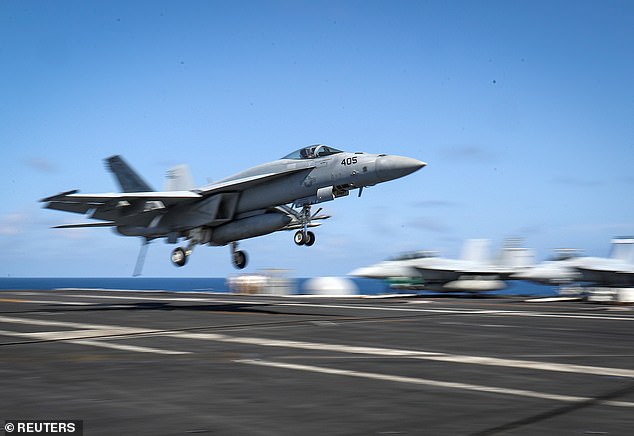 The USS Abraham Lincoln, a Nimitz-class aircraft carrier with F/A-18E – like this landing plane – and F/A-18F Super Hornet strike fighters on board, has been deployed from the Mediterranean to the Arabian Sea, putting it near the volatile Persian Gulf 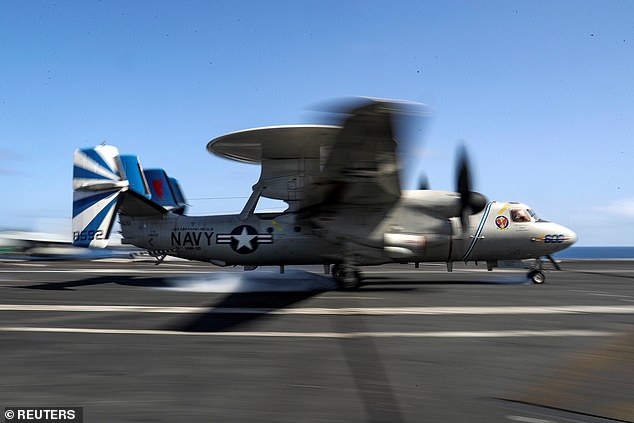 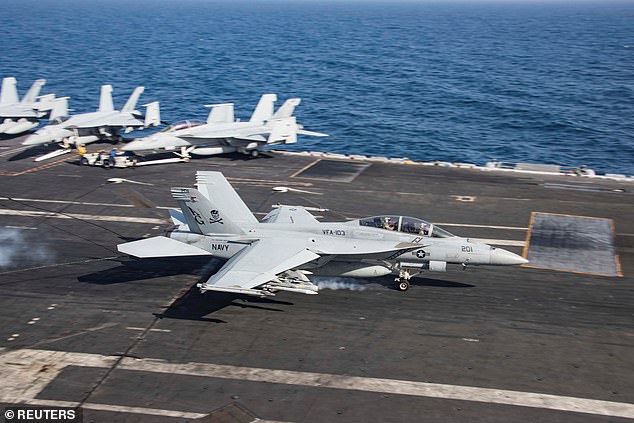 Safe return: An F/A-18F Super Hornet strike fighter makes an arrested landing on the flight deck of the USS Abraham Lincoln in the Arabian Sea

‘I would if we need them. I don’t think we’ll need them. I really don’t,’ he told reporters at the White House following a speech about financial relief to farmers.

‘I would certainly send troops if we need them. … If we need it we’ll be there in whatever number we need,’ Trump said Thursday.

Tehran’s government has waved its sabers with new intensity in recent weeks as the Islamist nation’s economy has shown signs of damage from punishing economic sanctions.

Trump recently ended waivers that had allowed eight European nations to buy oil from Iran, threatening them with their own economic consequences if they don’t comply.

Iran wants the U.S. to return to an Obama-era deal in which they agreed to limit their own ability to build a nuclear weapon in exchange for sanctions relief, an arrangement Trump called ‘a horror show’ on Thursday.

Tehran’s mullahs are thought to be behind a series of armed drone attacks on Saudi-flagged oil tankers in the Arabian Sea last week, a crisis that led Trump to dispatch the U.S.S. Abraham Lincoln aircraft carrier and an accompanying strike group to de-fang what appeared to be an imminent threat to a U.S. ally.

Trump called Iran ‘a nation of terror’ on Thursday, saying that ‘we won’t put up with it.’

‘We had 14 different attacks at one point. They were behind every attack.’

While Trump downplayed the possibility that he might re-engage militarily in the Persian Gulf region, he also wouldn’t agree that America has shrunk its military footprint there too far.

‘Look, I don’t think we ever should have been there, okay?’ he said, reinforcing his campaign-year claims that he opposed the Bush-era Iraq War at the time and would have handled the aftermath of the 9/11 terror attacks differently.

But he insisted that the U.S. military has ‘done a great job’ managing what is generally considered an unmanageable situation. 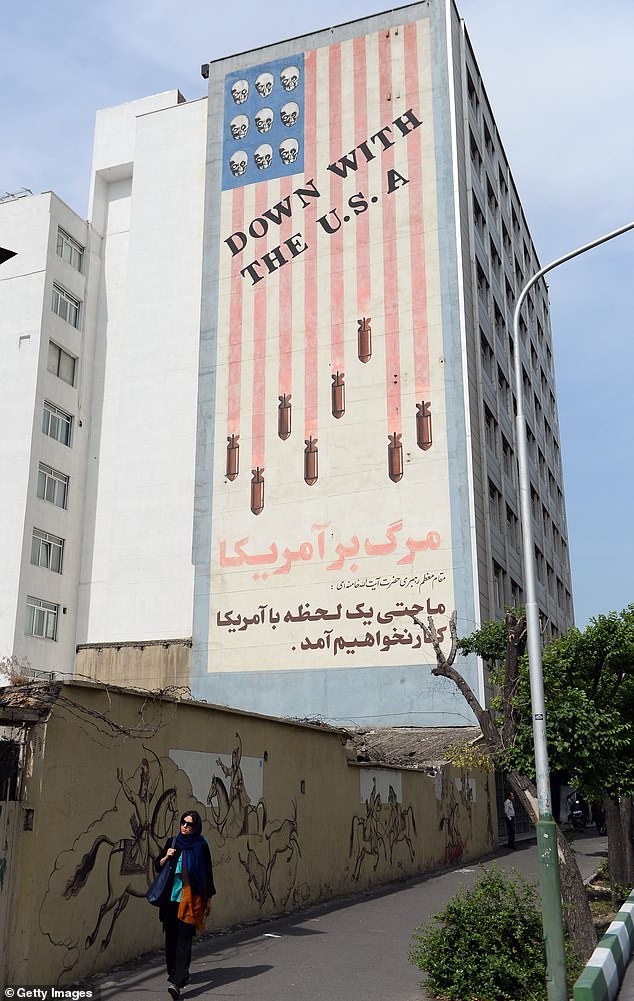 Pedestrians on Wednesday passed a giant wall mural reading ‘Down With The USA’ on a street in Tehran, Iran; The country’s mullahs have put new pressure on the Trump administration as they deal with the economic impacts of punishing new sanctions 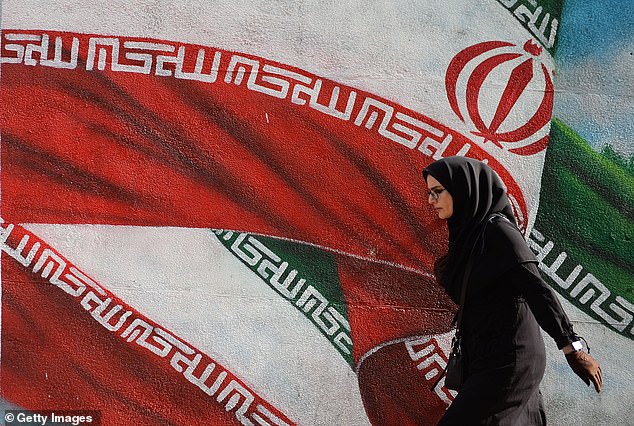 A woman was photographed passes in front of a mural depicting a flag of Iran, in Tehran, on Wednesday 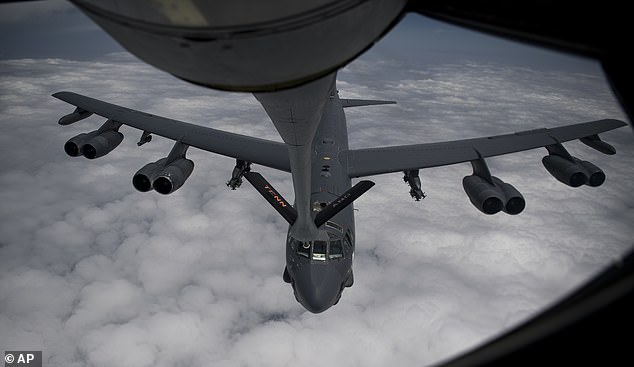 Four B-52 strategic bombers were moved from Louisiana to al-Udeid air base in Qatar, putting them in a short flight time of Iran

Trump said Thursday that he was about to get a briefing to hear Pentagon plans for sending up to 10,000 more troops to the Middle East.

The troops would be defensive forces, and the discussions have included additional Patriot missile batteries, more ships and increased efforts to monitor Iran.

Any move to deploy more forces to the Middle East would signal a shift for President Donald Trump, who has repeatedly emphasized the need to reduce America’s troop presence in the region.

Secretary of State Mike Pompeo said Thursday Trump was evaluating the force posture in the region ‘every day.’

‘We’re evaluating the risks, making sure that we have it right,’ he told ‘Fox and Friends.’

U.S. officials have provided few details about possible Iranian threats but indicated they initially involved missiles loaded onto small Iranian boats. This week officials said the missiles have been taken off the boats near Iran’s shore, but other maritime threats continue.

Sending more troops could also raise questions on Capitol Hill. During back-to-back closed briefings for the House and Senate on Tuesday, defense leaders told congressional officials the U.S. doesn’t want to go to war with Iran and wants to de-escalate the situation.

Pompeo and Acting Defense Secretary Patrick Shanahan told lawmakers the U.S. is seeking to deter, not provoke, Iran, even while accusing Tehran of threatening U.S. interests in the Mideast. Shanahan told reporters, ‘Our biggest focus at this point is to prevent Iranian miscalculation.’

Many in Congress are skeptical of the administration’s approach to Iran, questioning whether it is responding to significant new Iranian threats or escalating a situation that could lead to war.

Air Force Col. Patrick Ryder, spokesman for the Joint Chiefs of Staff, declined to comment Thursday, saying, ‘As a matter of long-standing policy, we are not going to discuss or speculate on potential or alleged future operations or plans.’

In early May when the U.S. accelerated the deployment of the Abraham Lincoln carrier strike group, it also sent four B-52 bomber aircraft to the region. The Pentagon also decided to move a Patriot air-defense missile battery to an undisclosed country in the area.

The Trump administration has evacuated nonessential personnel from Iraq, amid unspecified threats the administration said are linked to Iranian-backed militias in the country.

On Sunday, a rocket was fired into Baghdad’s heavily fortified Green Zone, landing less than a mile from the sprawling U.S. Embassy.

There were no injuries and no group claimed responsibility, but the rocket was believed to have been fired from east Baghdad – which is home to Iran-backed Shiite militias.

Some Democrats say Trump is responsible for drawing Iran’s ire.

Last year he abruptly pulled the U.S. out of the Iran nuclear deal, negotiated during the Obama administration to prevent Iran from nuclear weapons production, without crafting a coherent strategy for how to combat other Iranian behavior like supporting extremist organizations.

He also has reimposed punishing sanctions that have crippled Tehran’s economy, and designated Iran’s Revolutionary Guard Corps as a foreign terrorist organization in April.

‘I have yet to see any exhibited strategy,’ said Democratic Rep. Abigail Spanberger of Virginia, a former CIA officer. She said she finds many of the administration’s recent statements on Iran to be ‘deeply troubling.’