Three dead and many injured as lorry bulldozes ‘through neighbourhood barbecue’ 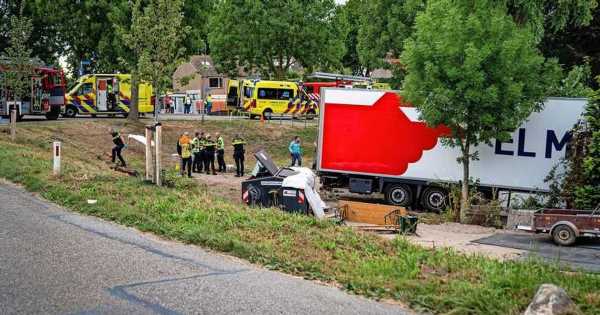 At least three people have died and several more severely injured after a truck crashed off the road into a neighbourhood BBQ.

The horrendous incident happened in the Netherlands today (August 27) in the town of Nieuw Beijerland at about 6pm.

Several people have been taken to hospital where their condition is unknown.

READ MORE: Prince Harry opens up on his heart-wrenching wish for Archie and daughter Lilibet

Eyewitnesses say the crowd was bulldozed by the truck which sped through the BBQ after leaving the road.

Dramatic pictures from the scene show a large Spanish transport company at the bottom of a hill surrounded by broken BBQ equipment.

It is currently unknown precisely how many people have died.

Ambulances, air ambulances and multiple police cars flocked to the scene with local police confirming they are "utilising a lot of emergency workers in the incident.”

Speaking to local TV, Police spokesperson Elianne Mastwijk said: "At some point a truck went off the road and crashed into the party".

It is unknown at this stage what caused the truck to leave the road.

The driver is being interrogated by police.

Charlie Aptroot, the mayor of Hoeksche Waard has said it is a “horrible accident in such a small, tight-knit community as Nieuw-Beijerland.”

To stay up to date with all the latest news, make sure you sign up for one of our newsletters here .