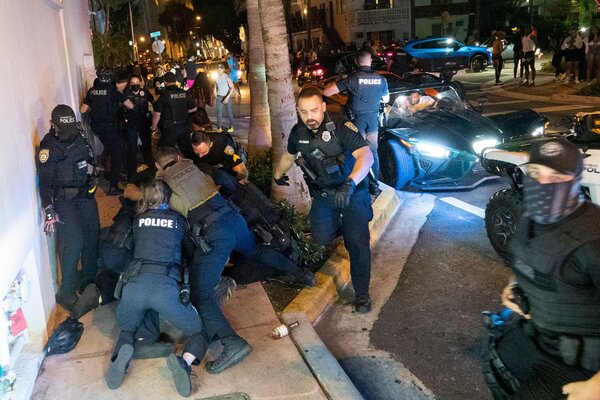 Miami Beach officials struggled to enforce a new 8 p.m. curfew on Saturday in the city’s South Beach entertainment district. Videos on social media from showed hundreds of people gathered outside after dark on Saturday and law enforcement dispersing crowds.

In trying to control crowds and taking a subject into custody, Miami Beach police said they used pepper balls. Two officers were also injured and taken to the hospital, according a departmental tweet. Police arrested at least a dozen people, according to CNN.

The city of Miami Beach, worried about the bigger than usual crowds filling the streets of South Beach and the threat of a resurgent coronavirus, declared a state of emergency and moved up its curfew on Saturday in an effort to shut down late-night spring break partying that it said had gotten out of control.

Law enforcement officials said many people had been drawn to the city this year for spring break, because it, like the state at large, has relatively few virus restrictions. Hotel rooms and flights have also been deeply discounted, to make up for the months of lost time.

“It looked like a rock concert,” Raul J. Aguila, the interim city manager, said in a hastily called news conference on Saturday afternoon after crowds overwhelmed the streets on Friday. “You couldn’t see pavement, and you couldn’t see grass.”

The emergency measures will be in place for 72 hours, until the City Commission can meet to decide on a longer-term plan. The commission is holding an emergency meeting on Sunday at 3 p.m. to discuss the curfews and closures. Miami-Dade County already has a countywide curfew in place at midnight.

Florida reopened months before the rest of the country, long before the recent wave of states like Texas that have lifted all or most lockdown restrictions and mask mandates.

Miami-Dade County has recently endured one of the nation’s worst outbreaks, and more than 32,000 Floridians have died from the virus, an unthinkable cost that the state’s leaders rarely acknowledge. The state is also thought to have the highest concentration of B.1.1.7, the more contagious and possibly more lethal virus variant first identified in Britain.

The new measures do not require hotels in Miami Beach to close, but guests are being asked to stay on hotel premises after curfew, and restaurants, bars and sidewalk cafes must close by 8 p.m.

Miami Beach’s entertainment district includes the iconic Ocean Drive and Collins Avenue, as well as Washington Avenue and Española Way, from Fifth through 16th Streets. The police have begun blocking people who are not city residents, hotel guests or employees who work on South Beach from driving into the city along the MacArthur, Venetian and Julia Tuttle causeways beginning at 9 p.m. until 6 a.m. the next day.