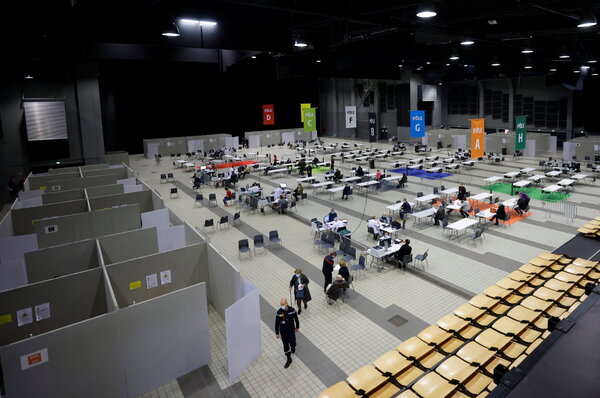 The European Union will receive an extra 50 million doses this month of the coronavirus vaccine developed by Pfizer and BioNTech, the leader of the bloc’s executive arm said on Wednesday, a lift in its effort to meet inoculation targets in the face of difficulties with vaccines developed by AstraZeneca and Johnson & Johnson.

The 27-nation bloc has also entered negotiations with Pfizer over the supply of 1.8 billion new vaccine doses — including booster shots to prolong immunity and new vaccines to tackle emerging variants — in 2022 and 2023, said Ursula von der Leyen, the president of the European Commission, its executive arm.

With these two announcements, the European Union embarked on a hard pivot to mRNA vaccines such as Pfizer’s, staking its coronavirus response on them, a day after Johnson & Johnson suspended the rollout of its vaccine in the European Union and as the bloc continued to suffer the fallout from restrictions on the AstraZeneca vaccine, after reports of extremely rare but serious potential side effects from both.

In another setback for AstraZeneca, Denmark on Wednesday became the first country to permanently stop the administration of the vaccine developed by the British-Swedish drugmaker. Denmark has heavily relied on Pfizer’s vaccine and has approved two others — Moderna’s, and Johnson & Johnson’s.

The European Union has not canceled its existing orders of AstraZeneca and Johnson & Johnson vaccines, but signaled it was not going to be placing more for the future.

“As we can see with the announcement by Johnson & Johnson yesterday, there are still many factors that can disrupt the planned delivery schedules of vaccines,” Ms. von der Leyen told the news media on Wednesday.

The European Union has set itself a target to to fully vaccinate 70 percent of its adult population by the end of the summer, some 255 million people, but its campaign has fallen behind those in United States and Britain, suffering blow after blow, first with major supply disruptions from AstraZeneca, and then as it has sought to respond to the reports of potential rare side effects.

Pfizer’s commitment to bring forward the delivery of the 50 million doses, which were originally slated for the end of the year, means the company will deliver a total of 250 million doses to the bloc by the end of June. Ms. von der Leyen said 100 million people in the European Union had already been inoculated.

But it also signaled that the bloc would seek to peg its strategy to tackle variants and the need for boosters in the medium term on mRNA vaccines, a newer technology being used by Pfizer and Moderna, moving away from vaccines based on other approaches like those from AstraZeneca and Johnson & Johnson.

“We need to focus now on technologies that have proven their worth: mRNA vaccines are a clear case in point,” Ms. von der Leyen said.