The chef who lost her sense of smell 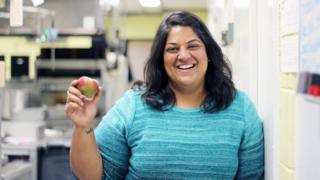 In January, chef Joshna Maharaj revealed a secret – she hadn’t been able to smell properly for about five years. Now, she’s working to regain some of what she lost.

Her loss of smell was gradual, though looking back she realised there had been red flags along the way.

Firstly, she was burning things. Peach squares, made with sliced “beautiful” summertime fruit, came out not browned but blackened.

“Sometimes you can trim and get away with it,” she says. Not this time. They ended up in the bin.

One day she walked into a BBQ restaurant with friends and was the only one who couldn’t smell the meat smoker working its magic.

“There was a moment where I retrospectively did all this math. ‘Wait a second, my nose is not working like it’s supposed to,'” she says.

“And to be honest, at that moment, the idea of it filled me with enough panic – particularly with the professional implications of this – that I just shut it all down.”

She told herself: “You are going to keep this secret, you are not going to tell anybody about this.”

The Toronto-born chef, food activist and author has worked with major public institutions, from universities to hospitals, to revamp the way they source, cook, and serve food.

Now she had anosmia, the complete loss of the sense of smell.

She became diligent about using cooking timers for everything, careful in case her nose betrayed her.

Her cooking shifted towards “mega flavour”.

“Lots of garlic and onions and ginger and a giant curry that’s going to smack you in the face, or intense, intense, major rhubarb, or we’re going to go deep on strawberry.”

The flavours had to be bold, especially as her taste was also muted by her smell loss.

Anosmia can have any number of causes, from common infections to brain injuries. Recently, researchers have found a loss of smell or taste is a symptom of the coronavirus.

Ms Maharaj’s condition was caused by extreme sinusitis that led to polyps -noncancerous growths linked to chronic inflammation – in her nasal passage.

For years, she struggled with what felt like constant congestion.

“I tried all the things – Chinese medicine, diet change, acupuncture, constantly hoofing down decongestants. We had suspicions about mould lurking under the carpet of my apartment.”

In February 2019, she had surgery to remove the polyps and fix a deviated septum. In August, she regained a momentary sense of smell.

The first whiff she got was of a mango while on a trip to Bangalore. Her nose then gave her a glimpse of the incense and flowers in the lobby of her hotel. But in two weeks, her smell had disappeared again.

Over the 2019 winter holidays, she found herself in Croatia, and the trip brought home to her what she had been missing. Family would comment on the delicious smells in streets and restaurants. For her it was a blank.

There are smells she misses – campfires, garlic and ginger in the frying pan, the smell of newborns.

“I stuck my face all under his chin and nothing,” she says of meeting a friend’s new baby a few months back. “There was a sadness there, for sure.”

A friend also told her about the link between smell and emotion, leading her to research that suggests impairments in smell have been linked to increased rates of depression, anxiety, and a sense of isolation.

Those experiences made her realise she needed to address her anosmia head on.

In January, she went public with a post on Instagram, disclosing her condition and announcing she had begun “smell training to repair the path between my nose and my brain”.

She had found Abscent, a UK-based organisation that raises public awareness of smell loss and of smell training, which can help people regain some or all of their lost sense.

Ok. I’ve been keeping a secret. I haven’t been really been able to smell for the last five years. You can’t have a lot of confidence in a chef who can’t smell, which is why I’ve been quiet about this. But now I need a new story, so I’m starting some smell training to repair the path between my nose and my brain. Thanks to @abscentUK for the awesome guidance. #smelltraining #senseofsmellproject #snifapp #abscentuk #anosmia #smelling #essentialoils

Smell disorders are believed to affect about 5% of the general population – though that’s a very rough estimate, notes organisation founder Chrissi Kelly.

When people seek out a doctor or find themselves consulting with organisations like hers, it’s because “they’re absolutely miserable”.

She pictures the “archetypical good smeller” as a “bon vivant – you know, people who love to eat and drink and who love to be with people, and they’re gregarious”.

“So imagine when that person loses their sense of smell.”

When she lost her own ability to smell eight years ago, she hadn’t realised how connected she was to it, to the simple pleasure of breathing in fresh laundry off the line or the comfort of returning to the familiar smell of your own home.

Research suggests smell training may not be a cure for smell loss but it can improve a person’s chances of recovery by stimulating the olfactory nerves, which convey the sensation of smell to the central nervous system.

It’s like physiotherapy for the nose, says Ms Kelly.

The concept is simple.

Take four essential oils – usually a flowery smell, and fruity, aromatic and resinous ones – and spend about 20 seconds with each scent twice a day, focusing not just on trying to capture the smell but its related experiences.

“They’re mega – the four corners of smelling,” she says.

When she sits with the jars, the first in the rotation is eucalyptus, and she brings to mind “the steam room at the spa… with the greeny-ness, almost a minty-ness and an astringency, a little bit of sweetness”.

Then it’s lemon, and she’s imagining “lemon curd and just squeezing the juice out of a lemon”.

For rose, “there is a version of rose that actually finishes with sweetness that I love” and doesn’t have the “powderiness, grandmother-y” scent.

The last is clove, which is all about memories of “making pomanders at Christmas time”, and “winter, holiday baking and that woody, sweet, spicy kind of smell”.

For weeks, she sensed nothing when she opened the jars. Then in March she began to get hints of scent. Not quite the smells of eucalyptus or clove but something.

It was like struggling to find a word at the end of your tongue – she couldn’t quite grasp it. Soon she was getting some smell back. Within weeks, it was gone again.

AbscentUK cautions it takes a minimum of four months of sustained training to recover the sense – and that it can come back distorted or limited.

Imperfect as it is, Ms Maharai says she’s excited to begin “tasting all over again… reworking how I understand flavour” after years of cooking from memory.

“The fact that I have the freedom to just play around like that and honestly and truthfully experience this is very, very exciting.”