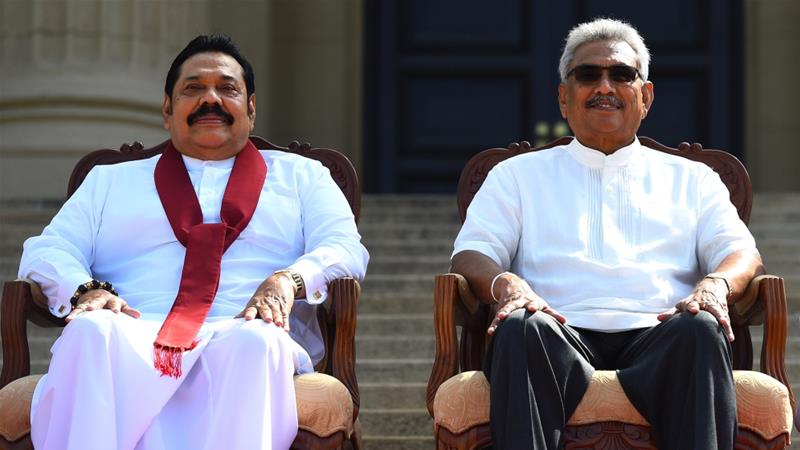 Sri Lanka’s Supreme Court is due to rule in a key constitutional case challenging President Gotabaya Rajapaksa’s decision not to reconvene parliament in light of a delayed general election – a case that observers say could have lasting implications for the island nation’s democracy.

Hearings began on Monday, when six petitioners and the government’s counsel argued on the legality of summoning a parliament that was dissolved earlier this year.

At the heart of the cases lies the issue of the country’s general election, originally scheduled for April 25 after President Rajapaksa dissolved parliament on March 2.

The Election Commission later rescheduled the poll for June 20 due to the coronavirus pandemic and the health risks associated with holding a poll.

According to Article 70 of Sri Lanka’s constitution [PDF], a general election must be held and a new parliament summoned within three months after the dissolution of the former parliament.

On Thursday, President Rajapaksa’s counsel argued that it was not possible to reconvene a parliament that had already been dissolved.

“A dead parliament will not come alive,” said Romesh De Silva in his arguments before the court.

The petitioners contend that a clause in the constitution allows for the summoning of the dissolved parliament in case of emergencies.

“[In case of an emergency the President can] summon the Parliament which has been dissolved to meet on a date not less than three days from the date of such Proclamation and such Parliament shall stand dissolved upon the termination of the emergency or the conclusion of the General Election, whichever is earlier,” says the relevant clause of the constitution.

Earlier in the week, the Election Commission told the court that it would not be possible to hold elections by June 20, and that the commission could hold the poll “nine to 11 weeks after receiving the green light from the health authorities that the country is safe”.

Sri Lanka has so far officially recorded 1,028 cases of the coronavirus, with nine deaths, according to government data, although it is feared the numbers could be far higher due to limited testing.

Without the oversight of parliament

Since March 2, President Rajapaksa has operated his government without the oversight of parliament, and his counsel has argued that he may continue to do so until a general election can be held and a new parliament convened.

“What’s going on here is effectively an executive takeover of the state,” says Asanga Welikala, a Sri Lankan constitutional expert.

“The constitution clearly envisages that all three branches are there to deal with a national emergency [and] here the president is refusing to do that, because he wants the executive to completely dominate the situation,” he says.

“It’s a thing that goes to the very heart of democracy under the Sri Lankan constitution and to the legality of executive action.”

Under the 19th amendment to the constitution, passed following a 2015 election in which the Rajapaksas were voted out of office, the powers of the president were drastically curtailed.

In November, however, Gotabaya Rajapaksa stormed to a landslide presidential election victory, promising a more centralised form of government and stricter security policies in a campaign that was marked by an appeal to Sinhalese Buddhist nationalism.

Since then, President Rajapaksa has appointed former military officials to more than a dozen key posts as the bureaucratic heads of ministries, and vested further power in his own office and those of his brothers.

He has also reappointed or promoted several military officers who were previously facing human rights violations charges in court over their conduct during the almost three-decade-long civil war against Tamil rebels.

“I think Sri Lanka is on the verge of a qualitative change in the form of governance,” says Alan Keenan, Sri Lanka senior consultant for the International Crisis Group (ICG).

In addition to questions of overall governance, the petitions at the Supreme Court have also challenged the legality of the government’s fiscal spending and authority to borrow funds in the absence of a parliament to provide oversight.

“For any government funding, after [the] three months, if you are doing any spending you have to obtain parliamentary approval,” said Manjula Gajanayake, national coordinator for Colombo-based elections watchdog the Centre for Monitoring Election Violence (CMEV).

“The executive arm is the only one that is active at the moment. That’s why we believe that there should be a parliament […] Parliament is the only arm that can check executive powers. But that arm is dissolved.”

In October 2018, Sri Lanka saw another constitutional crisis, when then-President Maithripala Sirisena attempted to dismiss the government of then-Prime Minister Ranil Wickremesinghe. After a prolonged crisis, the Supreme Court ruled in favour of PM Wickremesinghe.

Politically, Rajapaksa’s landslide win in November suggests that his Sri Lanka Podujana Peramuna (SLPP) party would win a large number of seats in any general election. There has also been widespread approval for his government’s handling of the coronavirus crisis so far, with curfews swiftly imposed and official numbers of infection low.

“They are seen to have done well to control the virus,” says the ICG’s Keenan. “Especially given the stark contrast between the competence of this government and the utter incompetence of the previous government, which was a disaster in terms of managing complicated problems.”

As such, Keenan and other analysts suggested that the government’s aim would be to hold a poll quickly to secure a two-thirds majority in parliament, one that would allow the Rajapaksa’s to amend the constitution.

“In the pre-pandemic scenario it was very clear from the highest levels of government that they are totally opposed to the 19th amendment, the cutbacks on presidential power and that … they want to roll that back,” said Welikala.

In the interim, however, there remains uncertainty about whether the government can continue to rule directly, without parliamentary oversight.

“I think their first desire would be to have an election sooner rather than later and do well in it,” says Keenan. “The question is: would they really be willing – and they seem to be – to rule in some kind of extraconstitutional way, and how long would they be willing and able to do that?”

The opposition, led by Sajith Premadasa’s SJB party, meanwhile, has been in disarray since the November poll, in which Rajapaksa defeated Premadasa. Premadasa stood as a candidate from the United National Party (UNP), the party then in control of parliament.

The aftermath of the election saw the UNP, led by then-Prime Minister Ranil Wickremesinghe, disintegrate, with Premadasa forming the SJB as a breakaway faction that made him leader of the opposition in parliament.

“They are very weak and that’s definitely going to play into the Rajapaksas’ and the SLPP’s [hands],” said Keenan.

Hearings in the case at the Supreme Court will continue on Tuesday.

Asad Hashim is a digital correspondent with Al Jazeera. He tweets @AsadHashim