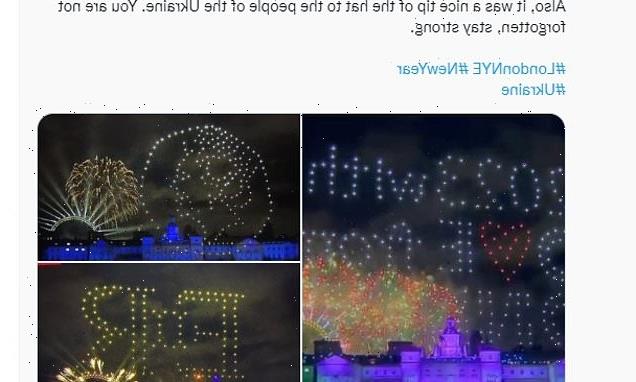 Tributes to Queen Elizabeth II and the struggle in Ukraine dominated the conversation online as Britain ushered in the New Year.

A spectacular fireworks display above the Thames included a poignant tribute to the late Queen, while the London Eye turned blue and yellow in solidarity with Ukraine as fireworks saw in midnight in the British capital.

The celebration – which London’s mayor Sadiq Khan branded the biggest in Europe, also referenced the red and white of England’s soccer team, and the rainbow colours of the LGBTQ Pride event, which had its 50-year anniversary in 2022.

Twitter users described shedding tears and said it felt ‘surreal’ to be welcoming a New Year without the late Queen. 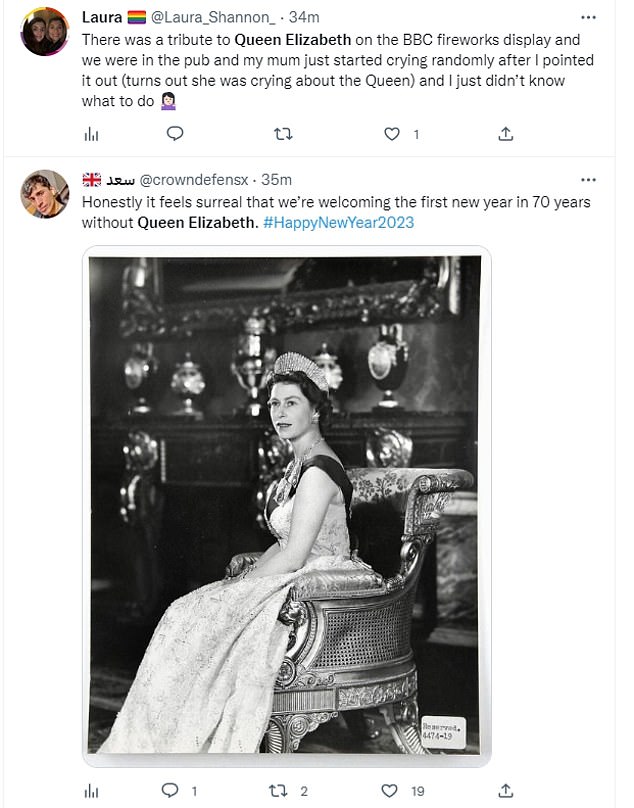 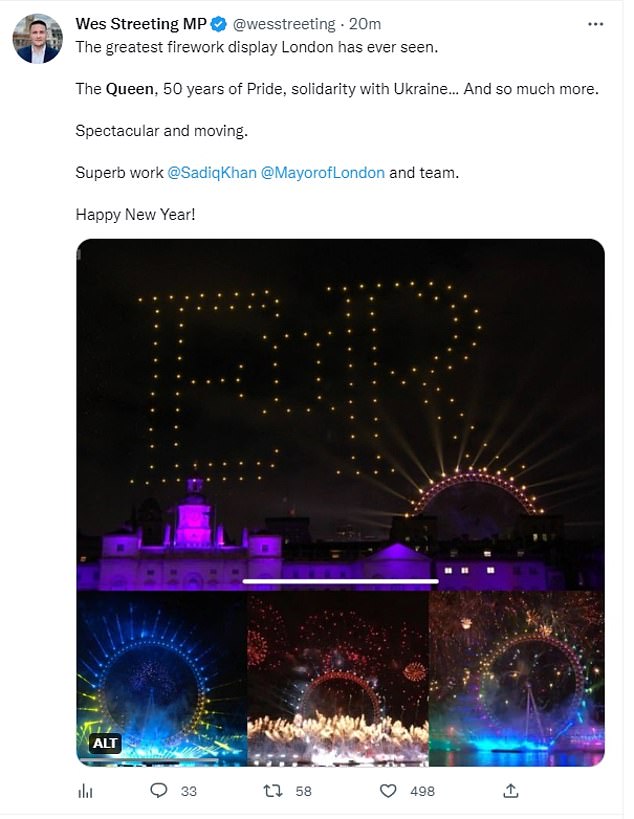 MP Wes Streeting noted the tributes to the Queen and Ukraine, calling it ‘the greatest fireworks display London has ever seen’ 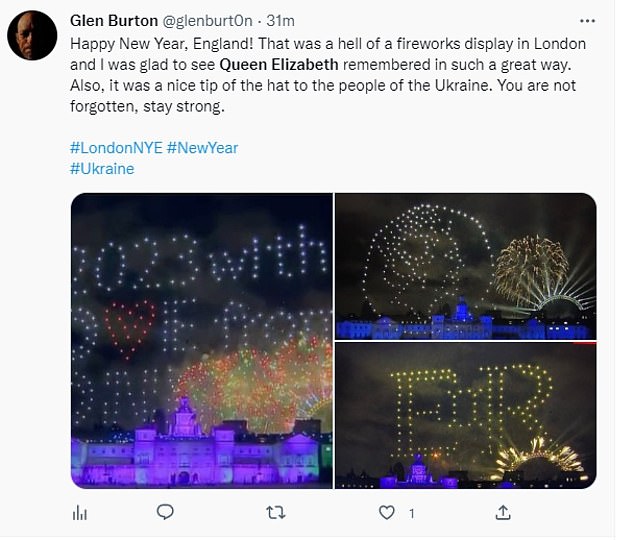 Glen Burton posted: ‘That was a hell of a fireworks display in London and I was glad to see Queen Elizabeth remembered in such a great way. Also, it was a nice tip of the hat to the people of Ukraine.’

Big Ben bonged in England’s capital as a crowd of more than 100,000 people gathered along the Thames Embankment in central London to watch 12,000 fireworks streak across the sky.

The sold-out show was designed to send a message of “love and unity”, as it highlighted the Lionesses’ history-making Euro win at Wembley, marked 50 years of London’s Pride with a message from Peter Tatchell from the Gay Liberation Front, and sent a message of support to Ukraine.

The display also paid tribute to the late Queen, featuring a voice recording from her and words from Dame Judi Dench, before honouring the King, together with a message from Charles about the need to preserve our planet’s future. 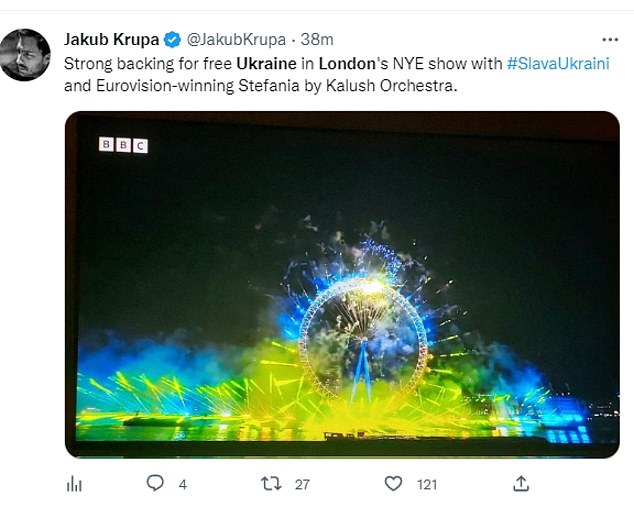 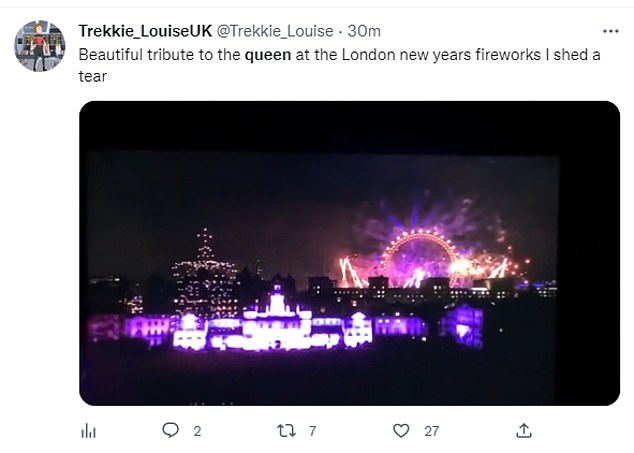 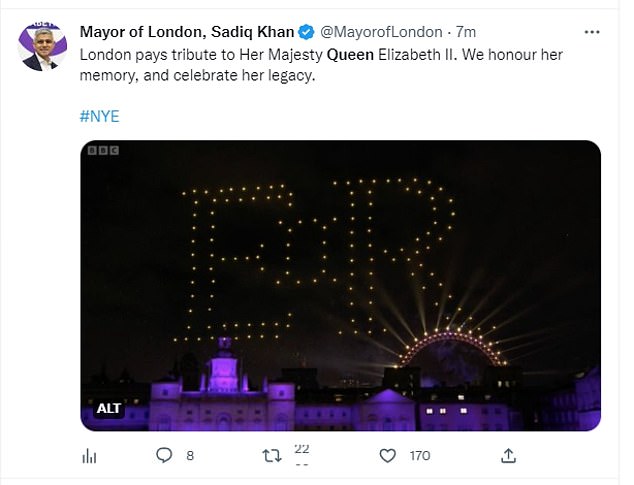 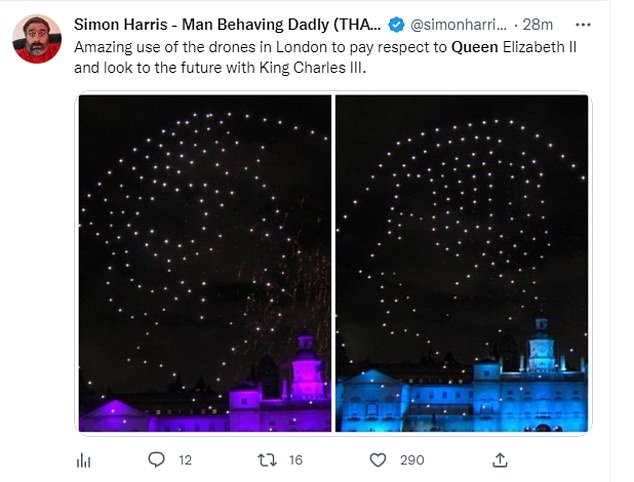 Mayor of London Sadiq Khan said he was “delighted” that Londoners and visitors could once again join together on the banks of the River Thames to ring in the new year.

Thousands of Metropolitan Police officers were on duty across the capital.

Officers have worked with charity Safer Spaces to build a place in Duncannon Street, central London, for women and girls to go should they feel unsafe.