Thousands of sex-crazed monkeys continue to cause havoc in the Thai city of Lopburi by attacking locals and stealing property.

The 6,000 macaques running free in the city were previously tolerated by locals as it helped to attract tourists who paid good money to feed them fruit and take pictures.

But lockdowns have stopped the tourists from coming which means the monkeys are running short on supplies, with new footage showing them turn violent and leaving locals struggling to keep control.

One monkey can be seen attacking a woman by jumping at her and pulling her by the hair, while another video shows a monkey casually stealing a protective facemask from a young boy. 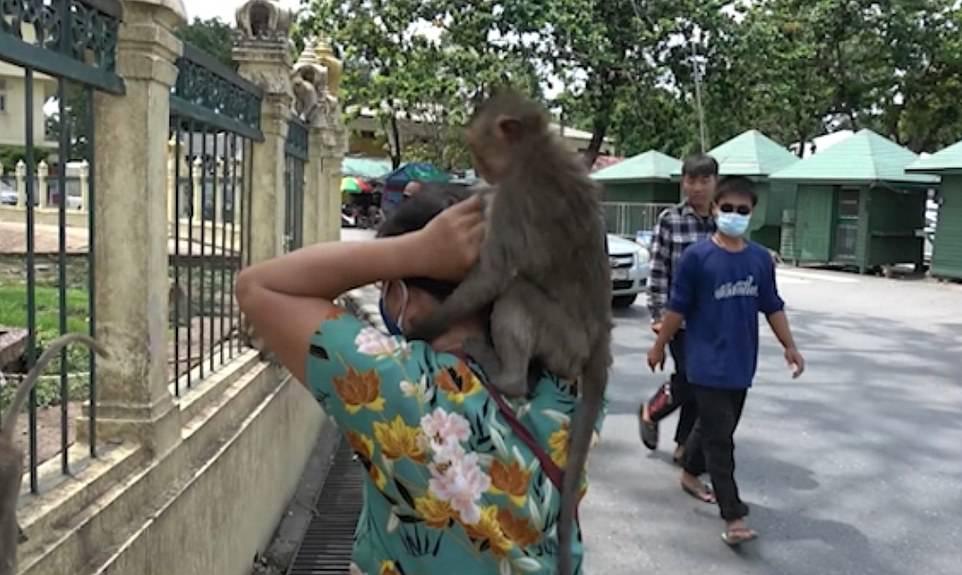 Macaques monkeys are still causing havoc in the Thai city of Lopburi as footage of the ‘sex-crazed’ pests shows them attacking a woman. The monkeys are used to being fed by tourists, but with lockdown resulting in fewer people visiting Lopburi, they are becoming more erratic in their behaviour

Meanwhile, several monkeys were seen bathing in a local pool in Lopburi, as temperatures can reach 35 degrees celsius in the Thai city, while others have forcibly taken food from the back of the cars of locals.

People have sought to appease them with junk food, but the sugary diet has turned them sex-crazed and that they are now breeding faster than before.

As a result, locals have resorted to giving the monkeys watermelon and other foods such as sweetcorn in order to calm them down.

Monkeys have been seen fighting with each other as they scrap for any food they can find caused by the lack of tourists coming into Lopburi to feed them.

Areas of the city have become no-go zones, with one abandoned cinema serving as the macaques’ headquarters – and cemetery of their warrior kings.

Dead monkeys are laid to rest by their peers in the projection room in the cinema’s rear and any human who enters is attacked by the vicious hoards. 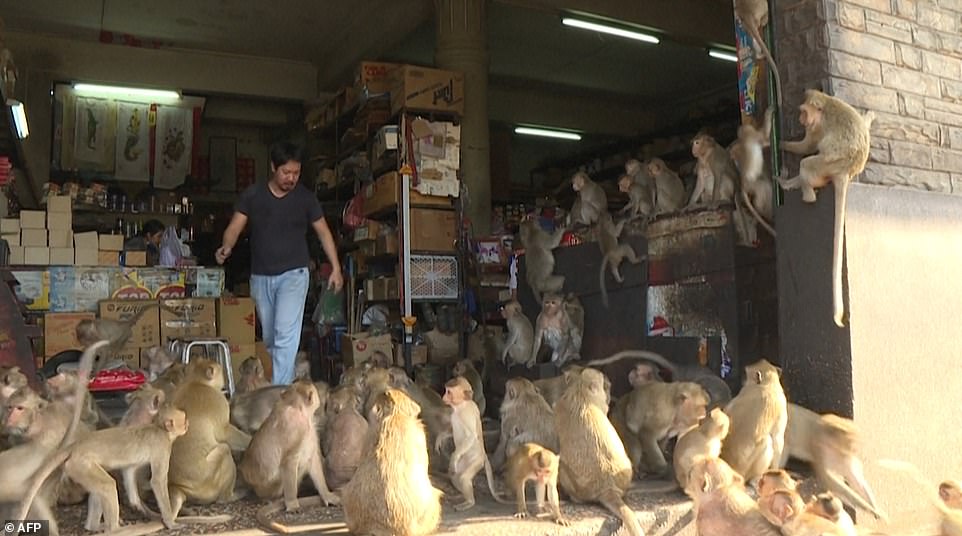 A troop of macaques invades a shop. People have sought to appease them with junk food, but the sugary diet has turned them sex-crazed and that they are now breeding faster than before. 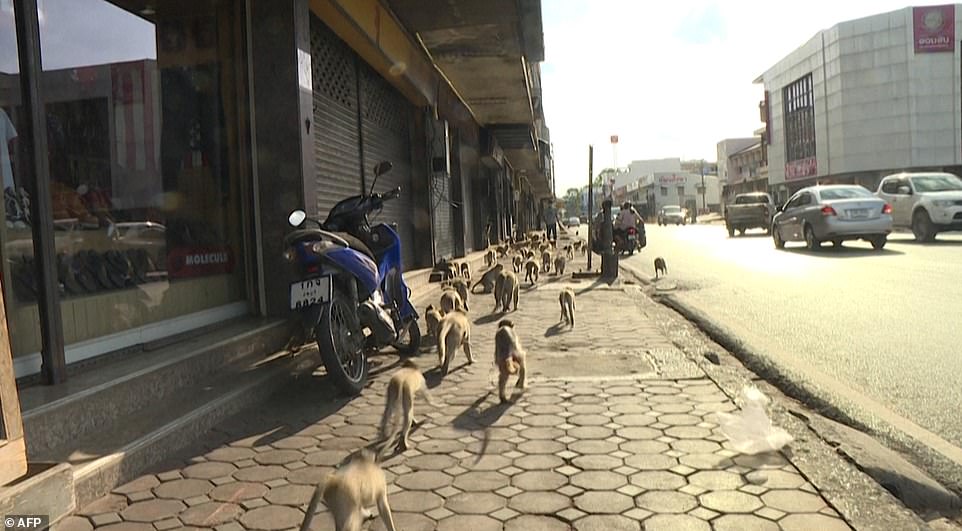 Lockdowns have stopped the tourists from coming which means the monkeys are running short on supplies, turning them violent and leaving locals struggling to keep control. 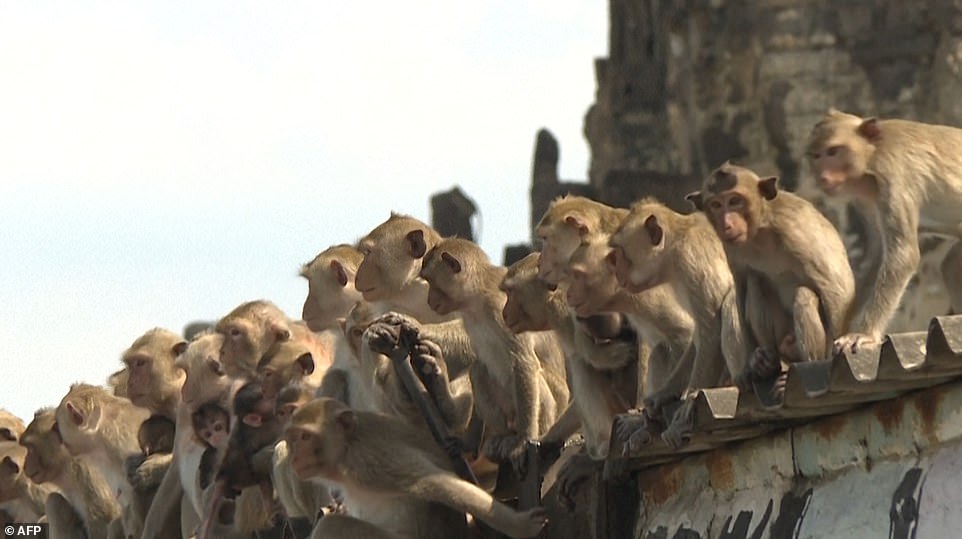 Monkeys watch anxiously as some of their number are captured and taken to be castrated. Wildlife department officers lure the animals into cages with fruit and take them to a clinic where they are anaesthetised, sterilised and left with a tattoo to mark their neutering. 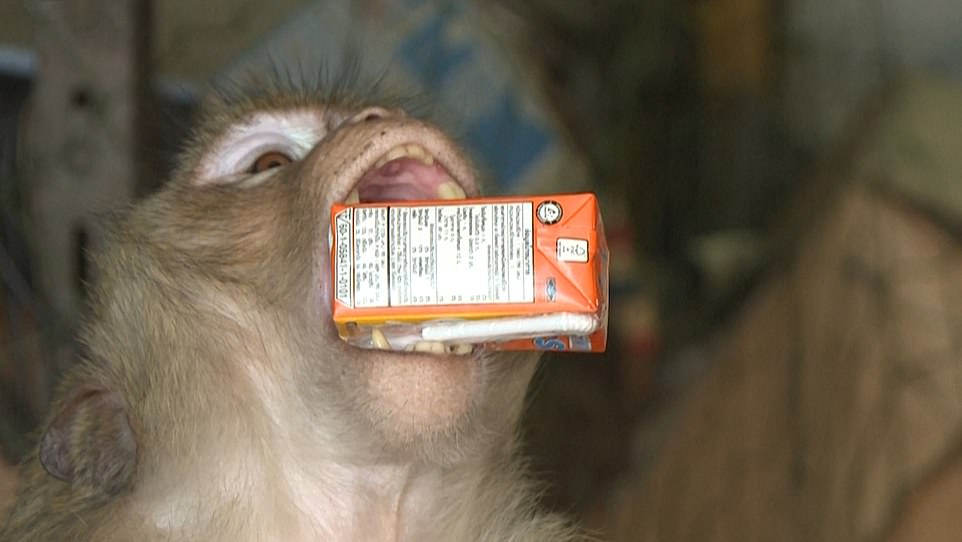 A marauding macaque who has invaded a local shop grips a juice carton in its teeth. The fearless species rules the streets around the Prang Sam Yod temple in the centre of Lopburi, patrolling the tops of walls and brazenly ripping the rubber seals from car doors. Litter is strewn across the city and the stench of their excrement is unbearable when it rains. Their growing numbers – doubling in three years – have made an uneasy coexistence with their human peers almost intolerable. Many areas have simply been surrendered to the marauding monkeys. 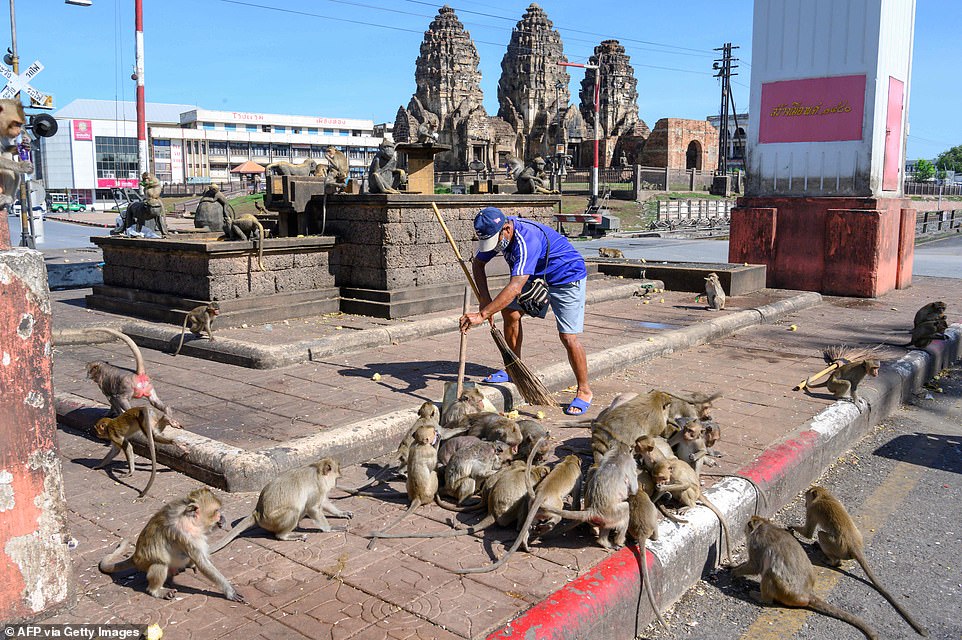 Lopburi is home to some 6,000 macaques which were a major tourist draw before lockdown stopped visitors from coming – but have now turned into a menace for locals 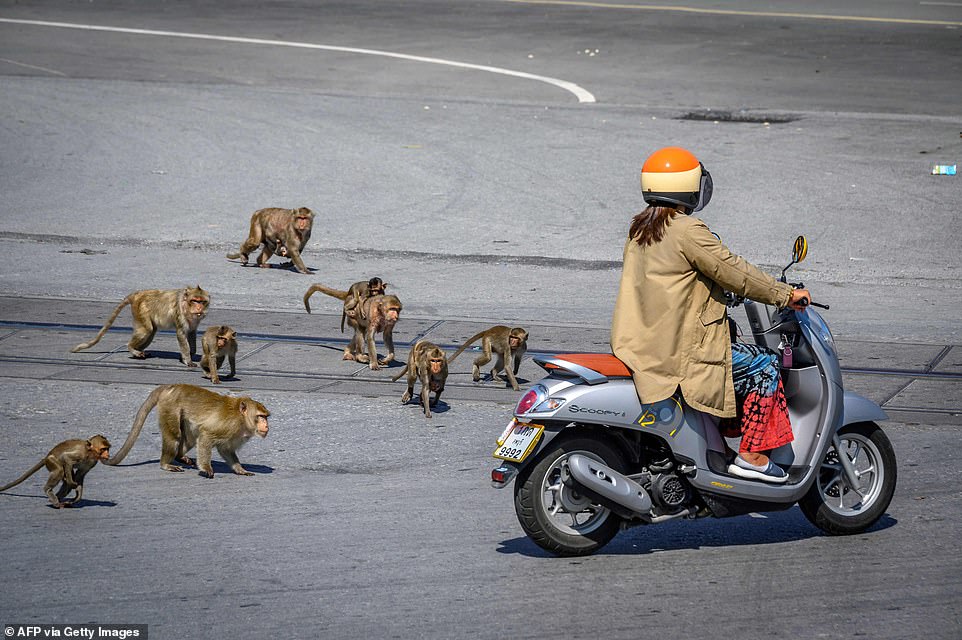 Residents say that without tourists to feed the monkeys they have turned violent, attacking people and each-other in an increasingly desperate search for food 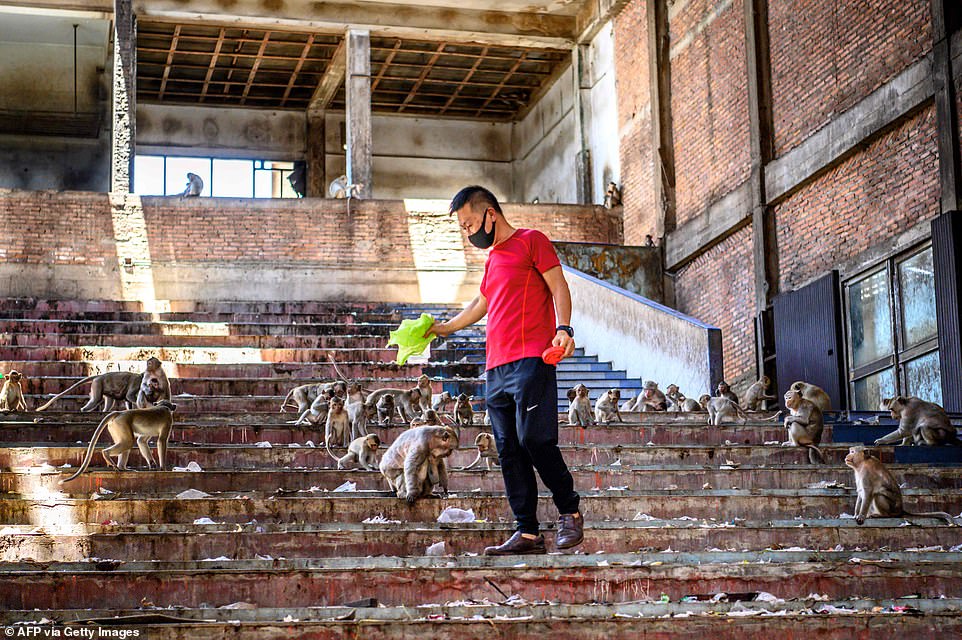 Some locals have taken to feeding the monkeys junk food in order to keep the fragile peace, but others claim this has turned the animals sex-crazed and means they are breeding faster than before 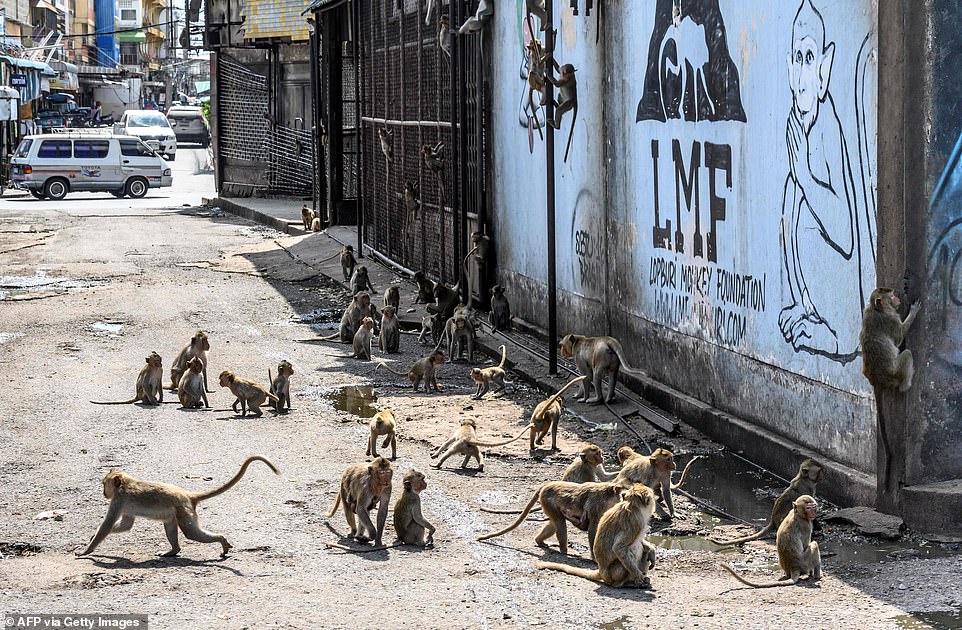 The monkeys have also started taking over abandoned properties in the city. A cinema that has long been derelict now acts as their base, and even contains a burial ground in a projection room – with anyone who enters attacked 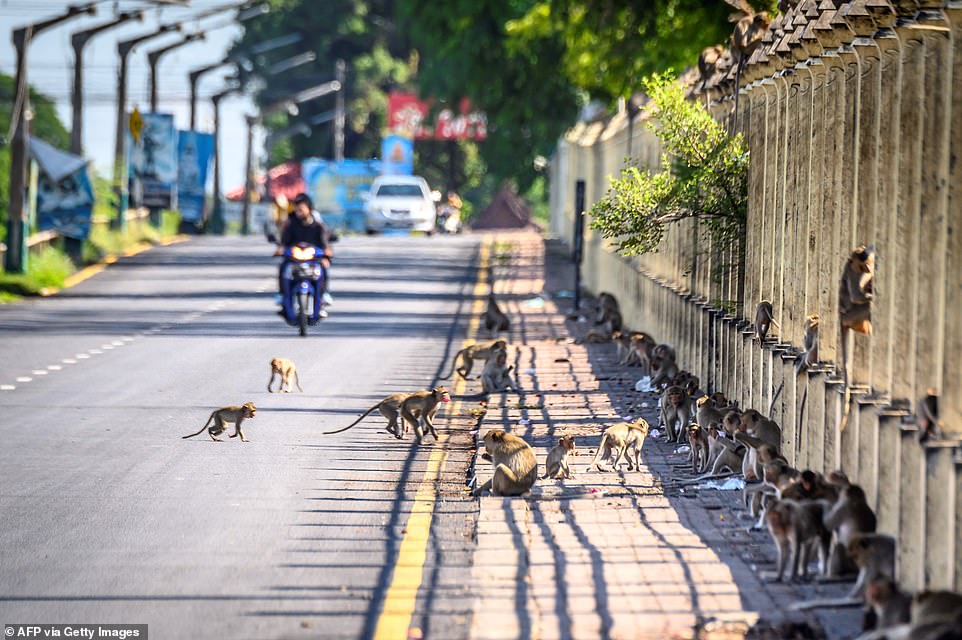 Residents of Lopburi have taken to putting bars across their windows to stop the monkeys getting in, claiming they are forced to live in cages while the animals have free roam of the streets

In March the primates were pictured getting into a mass brawl over bananas after the supply dwindles.

The fearless species rules the streets around the Prang Sam Yod temple in the centre of Lopburi, patrolling the tops of walls and brazenly ripping the rubber seals from car doors.

Pointing to the overhead netting covering her terrace, Kuljira Taechawattanawanna feels like a prisoner in her own home. ‘We live in a cage but the monkeys live outside,’ she says.

‘Their excrement is everywhere, the smell is unbearable especially when it rains.’

A government sterilisation campaign is now being waged against the creatures after the epidemic provoked an unexpected change in their behaviour.

Footage of hundreds of them brawling over food in the streets went vira l on social media in March.

Their growing numbers – doubling in three years – have made an uneasy coexistence with their human peers almost intolerable. Many areas have simply been surrendered to the marauding monkeys. 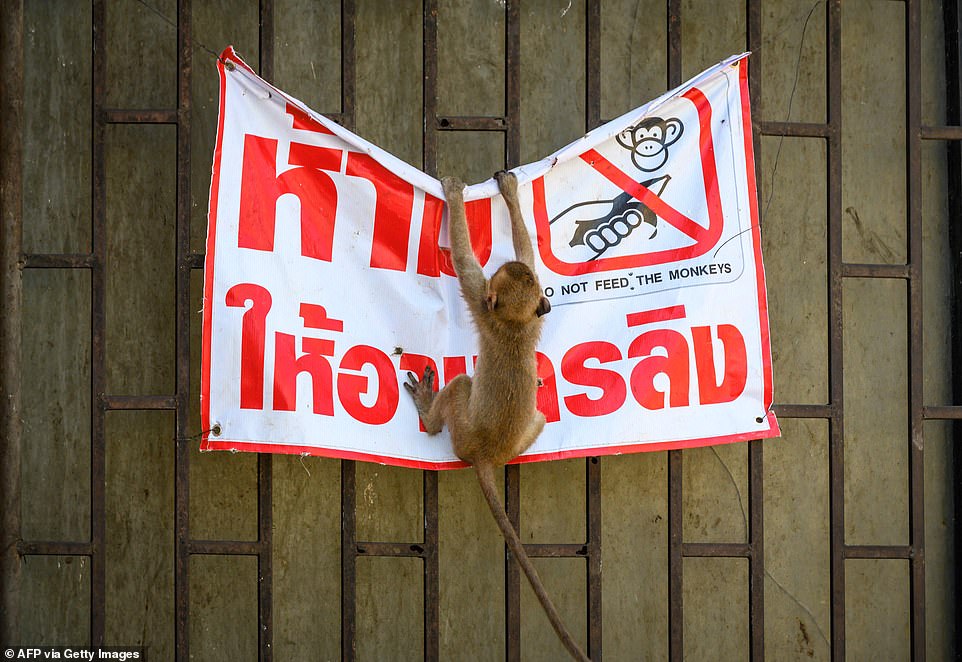 A macaque pulls at a sign warning people not to feed the monkeys, advice that some locals have been ignoring in an attempt to stop them fighting 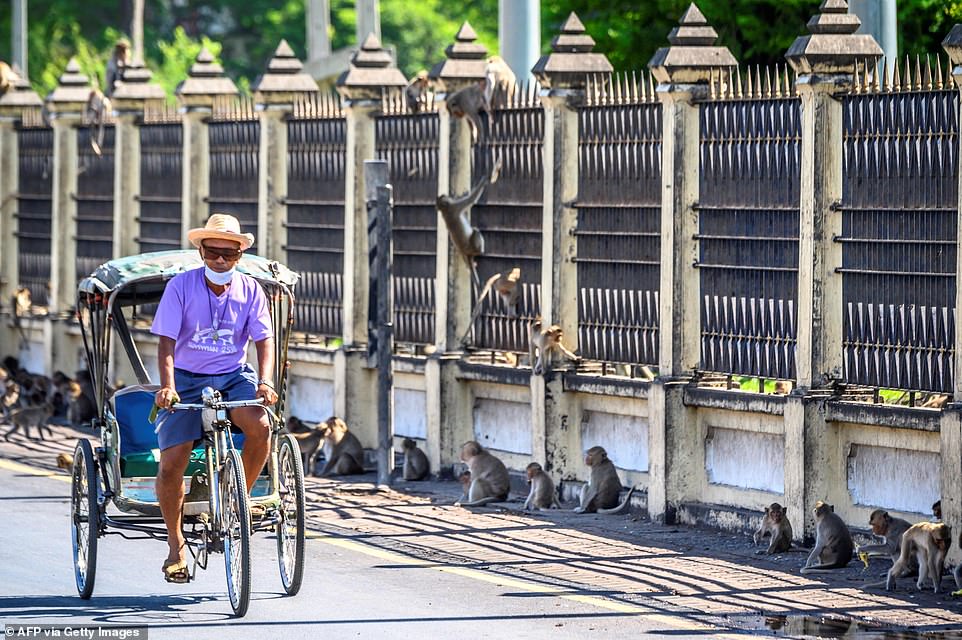 With no visitors to occupy their time or feed them, the monkeys are increasingly causing problems for locals who say they are becoming increasingly aggressive

Nearby, a shop owner displays stuffed tiger and crocodile toys to try to scare off the monkeys, who regularly snatch spray-paint cans from his store.

No one in Lopburi seems to remember a time without the monkeys, with some speculating that the urban creep into nearby forest displaced the simians into the city.

Residents have taken it upon themselves to feed the macaques to prevent clashes.

But locals say the sugary diet of fizzy drinks, cereal and sweets has fuelled their sex lives.

‘The more they eat, the more energy they have… so they breed more,’ says Pramot Ketampai, who manages the Prang Sam Yod temple’s surrounding shrines. 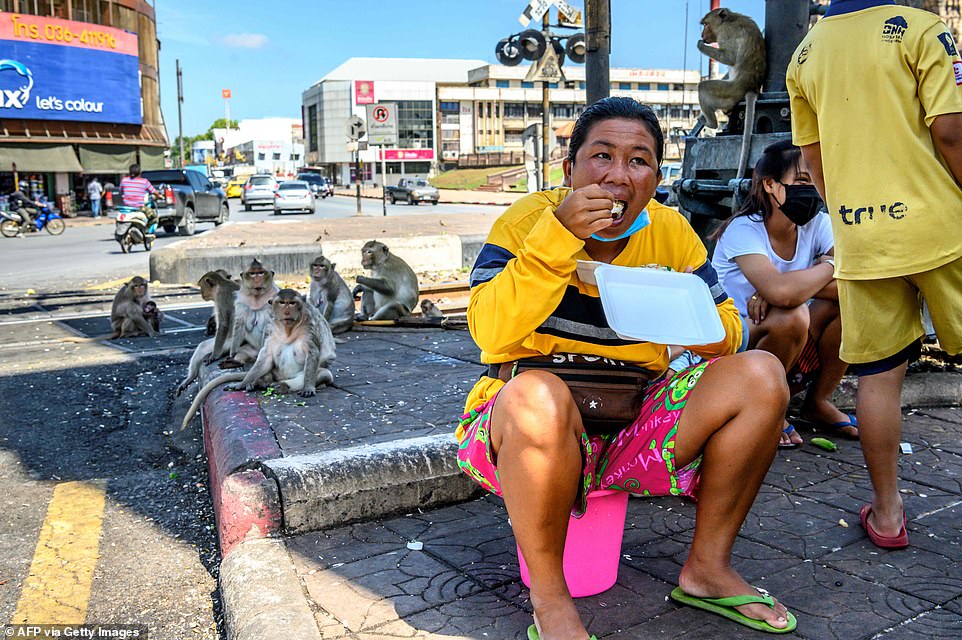 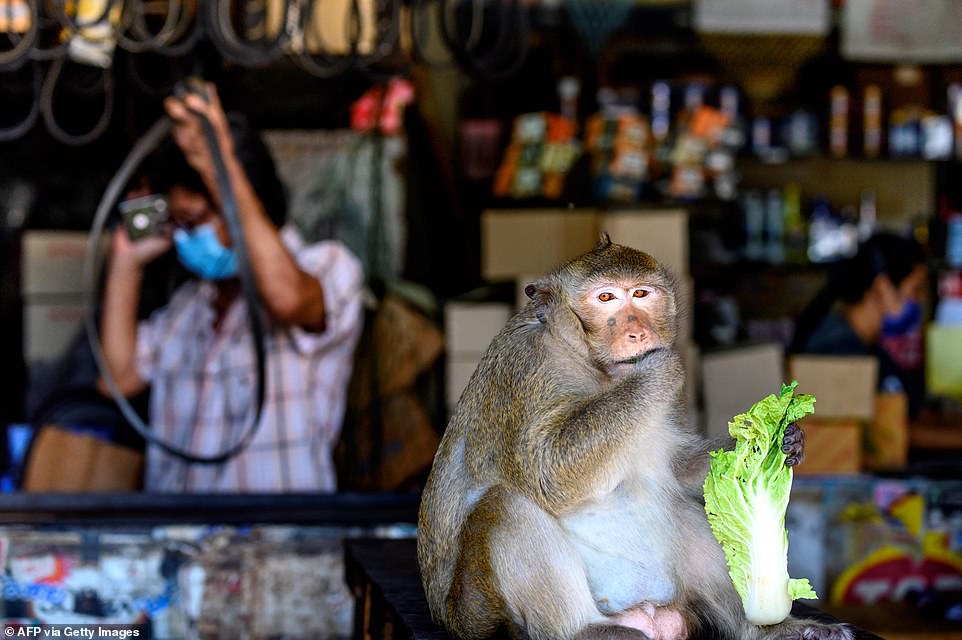 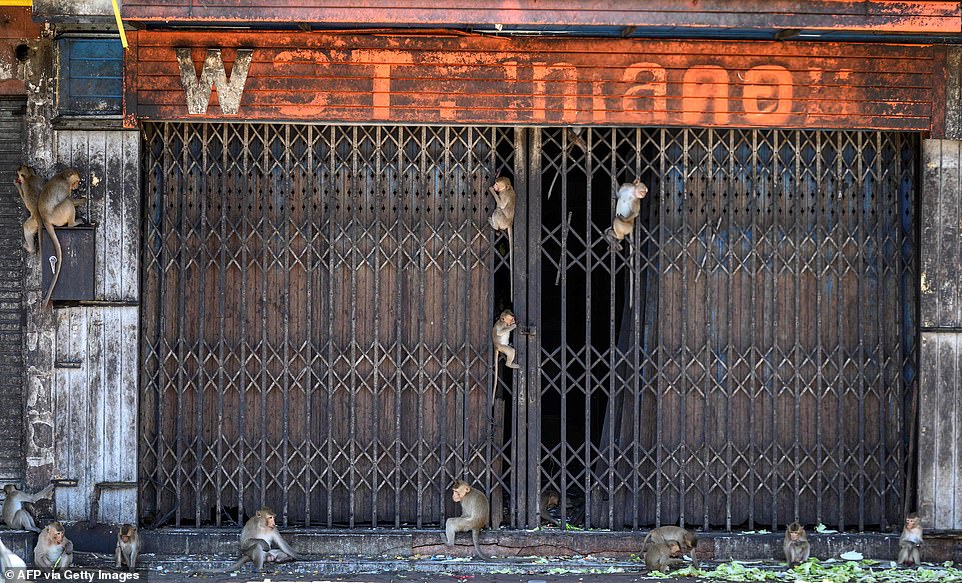 An abandoned shop has been taken over by monkeys, where they will sleep, breed, and even go to die after locals discovered what appeared to be a ‘burial ground’ inside a cinema

The macaques’ mob fights have drawn the attention of authorities, who restarted a sterilisation programme this month after a three-year pause.

Wildlife department officers lure the animals into cages with fruit and take them to a clinic where they are anaesthetised, sterilised and left with a tattoo to mark their neutering.

They aim to process 500 of the creatures by Friday. 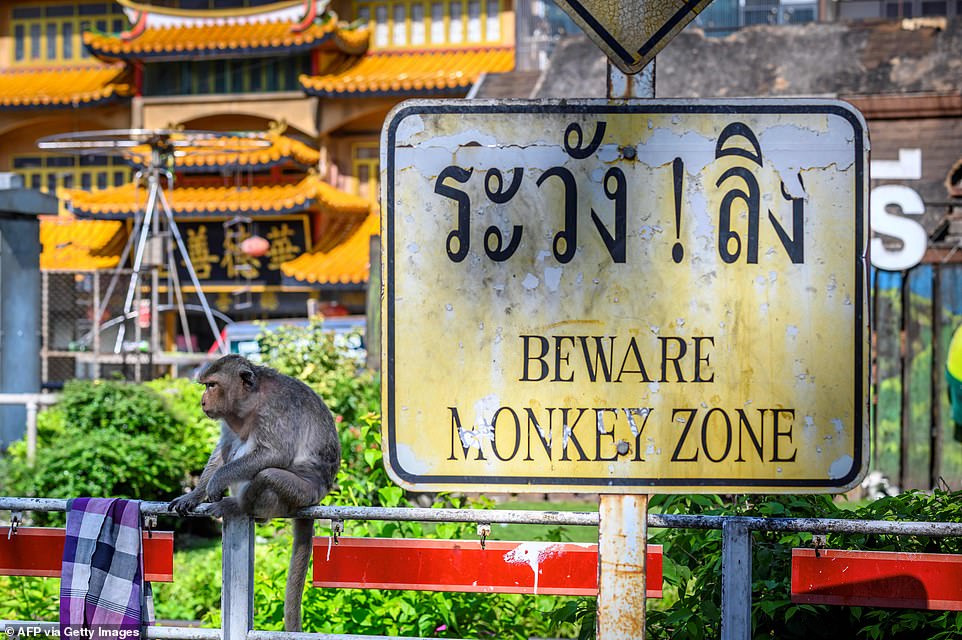 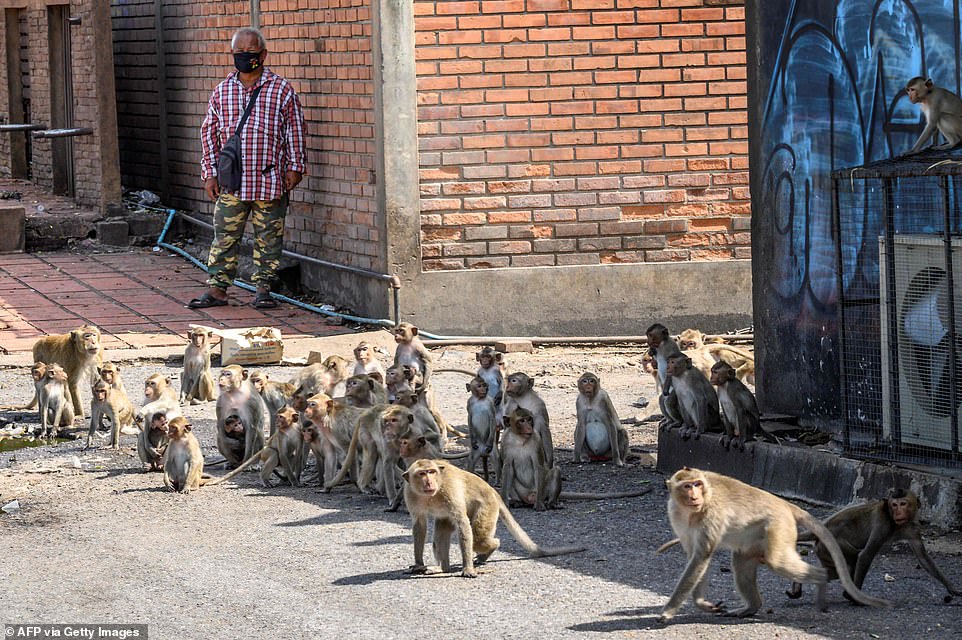 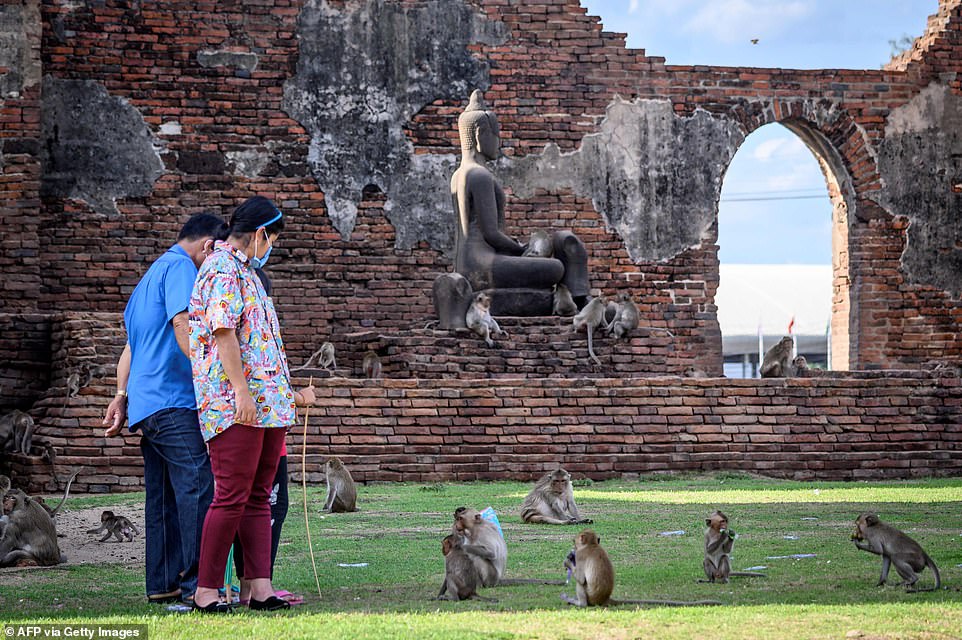 Domestic tourists walk around a shrine that is typically thronging with monkeys who were thrown fruit by the visitors, but the stream of food has now dried up 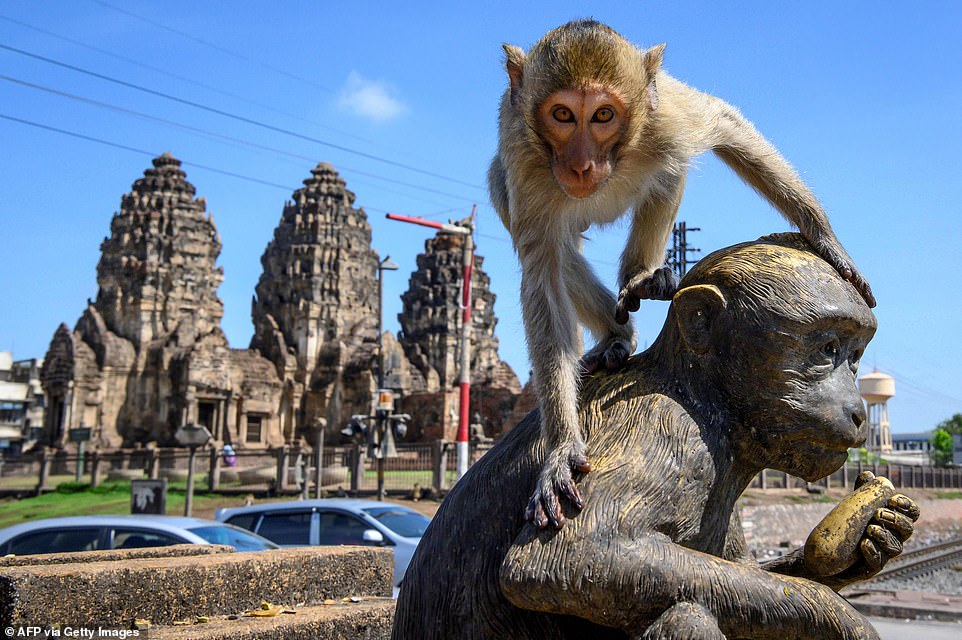 A macaque sits on top of a statue close to Lopburi’s main temple, another tourists attraction where they used to collect food

But the campaign may not be enough to quell their numbers and the department has a long-term plan to build a sanctuary in another part of the city – this will likely be met with resistance from the human residents.

‘We need to do a survey of the people living in the area first,’ said Narongporn Daudduem from the wildlife department.

‘It’s like dumping garbage in front of their houses and asking them if they’re happy or not.’

Taweesak Srisaguan, the shop owner in Lopburi who uses stuffed animals as a deterrent to the unwanted monkey visitors, says that despite his daily joust with the creatures, he will miss them if they are moved.

‘I’m used to seeing them walking around, playing on the street,’ he says.

‘If they’re all gone, I’d definitely be lonely.’