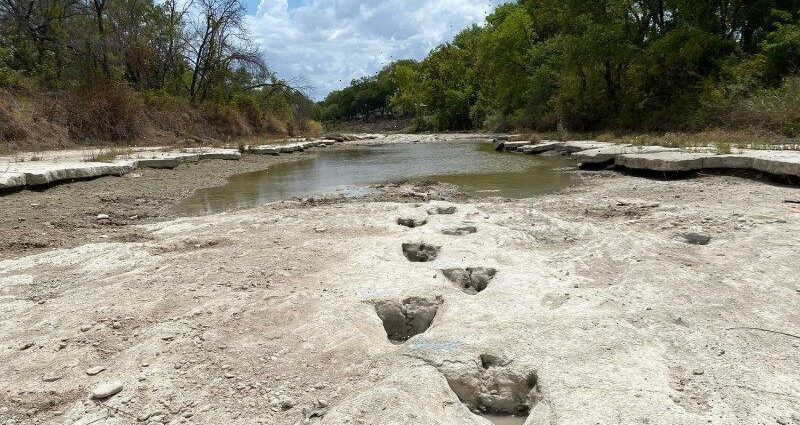 New York: As a punishing drought continues to grip parts of the world, bodies of water have been drying up, exposing submerged World War II relics in Europe, several sets of human remains at Lake Mead outside Las Vegas, statues in China and even an entire village in Spain. 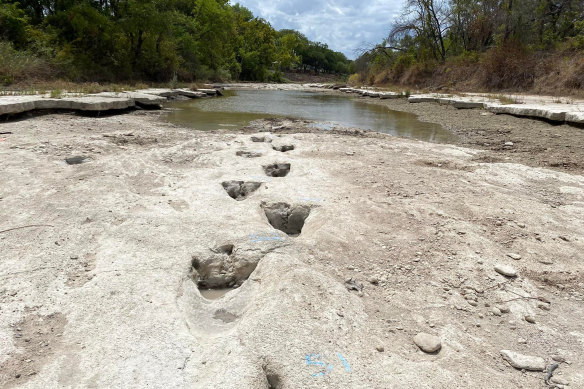 Severe drought conditions at Dinosaur Valley State Park, about 96 kilometres south-west of Fort Worth, exposed dinosaur tracks from around 113 million years ago that were previously hidden underneath the Paluxy River, according to Stephanie Garcia, a spokesperson for the Texas Parks and Wildlife Department. The tracks, which were discovered this month, belong to Acrocanthosaurus – theropods, or bipedal dinosaurs with three toes and claws on each limb.

The dinosaur would have stood 4½ metres tall and weighed more than 6 metric tonnes as an adult. They left their tracks in sediment that hardened into what is now limestone, researchers say.

“Due to the excessive drought conditions this past summer, the river dried up completely in most locations, allowing for more tracks to be uncovered here in the park,” Garcia said in a statement. “Under normal river conditions, these newer tracks are under water and are commonly filled in with sediment, making them buried and not as visible.” 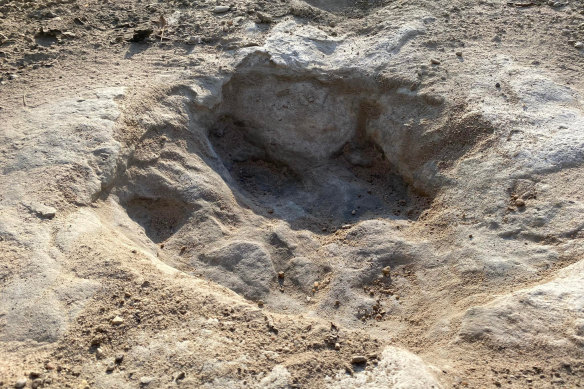 One of the footprints from Acrocanthosaurus, which are theropods, or bipedal dinosaurs with three toes and claws on each limb. They left their tracks in sediment that hardened into what is now limestone.Credit:DVSP via The New York Times

The tracks are likely to be buried again by rain this week. But the finding — even if for a brief moment — excited researchers and the public.

“Tracks being buried under layers of sediment do help protect them from natural weathering and erosion,” Garcia said.

Other tracks at Dinosaur Valley State Park belong to a sauropod, or long-necked, small-headed dinosaur, called Sauroposeidon proteles. This species would have stood 60 feet tall and weighed 44 tons as an adult.

Louis Jacobs, a vertebrate palaeontologist and an emeritus professor of earth sciences at Southern Methodist University, saw the tracks on Saturday. He said these tracks joined others that were already known, and together they now add up to about 150 dinosaur steps.

“Those footprints – they’re spectacular because they’re deep,” he said. “You can see the toenails. There’s more than one kind, and there’s a lot of them.” 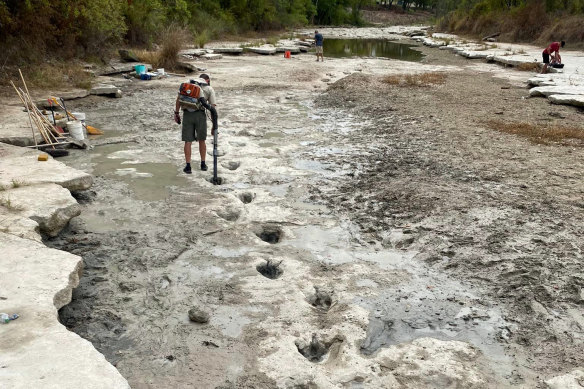 These dinosaur tracks were previously hidden underneath the Paluxy River in the Dinosaur State Valley Park, Texas.Credit:DVSP via The New York Times

Jacobs said the prints signalled there might be more that remains undiscovered. As the river erodes, it will expose more tracks but also erase others.

Dinosaur tracks collected from the Paluxy River in 1938 are on display at the American Museum of Natural History in New York City.

The river and park have been educating researchers on dinosaur behaviour for decades, he said. But the discoveries are often at the mercy of the weather, including when rocks freeze in winter and crack the tracks.

The footprints occur on a sedimentary rock unit called the Glen Rose Formation, which is mostly limestone, deposited about 105 to 110 million years ago, Farlow said.

“Texas is blessed with a lot of good fossil occurrences,” Farlow said, “not only of dinosaur footprints but also of dinosaur skeletons as well.”

He added, “It’s a resource that is continually being destroyed but continuously being renewed.”

Texas is facing extreme weather, with parts of the state experiencing droughts and other parts seeing flash flooding, following a period of intense heat and dangerous wildfires.

Some parts of the Dallas-Fort Worth area received more than 33 centimetres of rain on Sunday into Monday, leading Judge Clay Jenkins of Dallas County, the top elected official there, to declare a state of disaster in the region. Governor Greg Abbott directed the Texas Division of Emergency Management to mobilise resources to help residents affected by the flooding.

The drought, however, has triggered water restrictions in the state. Some 27 per cent of the state is under the most severe category of drought warning.

This article originally appeared in The New York Times.