A SCARED elderly woman has been saved from the streets after a heartbreaking picture of her sleeping rough emerged.

Found shivering under a duvet in Manchester, the woman, known only as Anne, had been forced out of her home and was sleeping with just a tarpaulin between her and the cold ground. 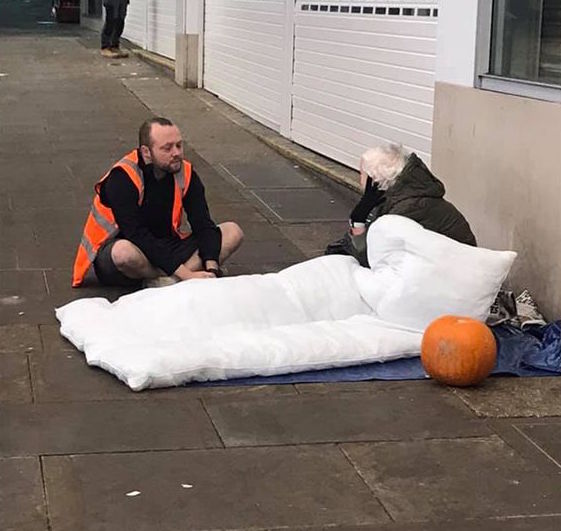 A member of the Don't Walk Past charity first saw Anne on Tuesday evening.

One of the group's volunteers posted the distressing image on Facebook, with it soon going viral as dozens of people offered to help.

Don't Walk Past charity founder Ronny English today said: "Thankfully she is now safe and off the streets.

"She was newly homeless, just a week. She was scared.

"We put her up in a hotel for a few days but now social services have stepped in to help.

"In my experience that means she will get a place in a hostel or sheltered housing.

"She has a few mental health problems and was paranoid people were following her."

Volunteers who came across the woman, sleeping alone on the shopping street, said she was very confused.

It still isn't clear exactly how she ended up on the streets, concerned locals said.

"She was scared. She was sitting on a tarpaulin, with just a duvet. She was freezing cold.

"She said she's been moved on from where she'd been. She was in Piccadilly Gardens.

"It was scary for her, there were lots of noises. She said it was like 'Armageddon'.

"We're still trying to find out what happened to her, how she ended up on the streets."

A Manchester council spokesman said: "We are pleased to see that quick action was taken to get this woman off the streets and into safe, stable accommodation.

"Our outreach team worked alongside homelessness charities and organisations to find her after being alerted on Wednesday.

"While we were unsuccessful, we were relieved to learn that she had been found by a partner charity."

Earlier this year charity bosses warned the UK is facing a homelessness crisis after Government data showed more than 75,000 families were either homeless or at risk of becoming homeless before lockdown.

The pandemic has seen many Brits struggle to retain work and pay rent, with it feared the problem will worsen.

Manchester is now in Tier 3 and living with the toughest of the coronavirus restrictions.

Locals in the region are unable to mix indoors or outdoors, with many businesses forced to shut down once more.

It comes after footballer Marcus Rashford's campaign to get free meals for vulnerable kids in the holidays sparked hundreds of businesses UK-wide offering food.

More than 20 men and women, reportedly from Eastern Europe, lay on mattresses and cardboard outside a swanky Mercedes showroom in one of London's richest areas.

It came amid a spike in homelessness after hotels reopened for business and evicted rough sleepers after housing them during the height of the coronavirus lockdown.

CVS, Walgreens to Give Covid-19 Shots at Nursing Homes