A ninth shooting victim died after being transported to a hospital, according to reports.

That person was identified as Alex Ward Fritch, 49, who died at Santa Clara Valley Medical Center, FOX 2 of the Bay Area reported.

Earlier, the office of the Santa Clara County medical examiner and coroner had released the names of eight people who were killed in the shooting at a Valley Transportation Authority rail yard.

Also dead was the gunman, identified as Sam James Cassidy, 57, who authorities said was known as a quiet employee of the VTA who had no previous criminal record. Cassidy apparently turned his weapon against himself after the bloodshed, authorities said.

One VTA employee, who asked not to be named, claimed Cassidy had essentially gunned down an entire shift of employees at the transit agency.

“The whole crew is gone, the whole shift is gone,” the employee told the Mercury News of San Jose. “It’s horrible.”

“The whole crew is gone, the whole shift is gone. It’s horrible.”

Authorities were still trying to determine what had set him off.

Prior to arriving at work and opening fire, Cassidy had set his own house on fire, with gasoline and ammunition left inside, FOX 2 of the Bay Area reported. Security camera footage showed him around 5:45 a.m. – less than an hour before the massacre – leaving home wearing a blue jumpsuit and tossing a black duffel bag into a white pickup truck, according to the station. 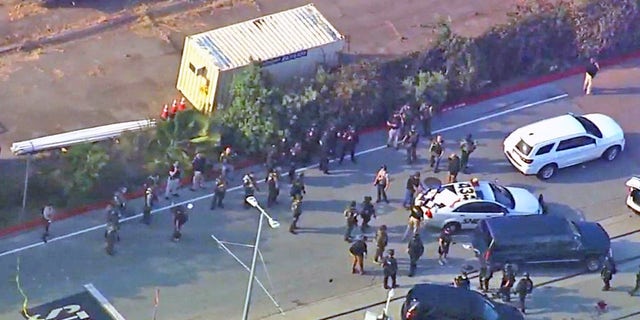 The scene outside the site of Wednesday’s shooting. (KGO)

A fire crew responded to Cassidy’s burning house around the same time he was eight miles away, firing bullets at his co-workers, FOX 2 reported.

Though known by some to be quiet, Cassidy also had a darker side and was often quick to anger, according to a former girlfriend and a neighbor.

“I was scared,” the woman, who said she broke up with Cassidy about 12 years ago and has requested anonymity, told KNTV-TV of San Jose. “He made a lot of trouble for me. I’ve moved forward.”

“I was scared. He made a lot of trouble for me. I’ve moved forward.”

She told the station that Cassidy displayed mood swings that seemed to be brought on by excessive drinking.

“Several times during the relationship he became intoxicated, enraged and forced himself on me sexually,” the woman claimed.

In 2009, Cassidy had sought a restraining order against the woman, claiming she had threatened to get him fired from his job and had damaged a car in his driveway. She denied the allegations, according to KNTV.

Their dispute was ultimately settled out of court, the station reported.

A longtime neighbor told FOX 2 he always tried to avoid Cassidy because he considered Cassidy to be someone who could quickly turn angry.

“I talked to him five times in five years,” Doug Suh, who lives across the street from Cassidy’s home, told the station. “I say ‘Hi,’ and he stared at me, dirty looking all the time. So I ignore him every time I see him.”

Cassidy lived in the house with a wife before they divorced in 2009, then lived there with the girlfriend until she turned down his marriage proposal, FOX 2 reported. That’s when he filed the restraining order against her, the report said.