Roads submerged and firemen swamped by call-outs amid flooding

After a severe soaking for many of us over the weekend, you might be hoping for a bit of respite from the rain.

But there’s no let up just yet, forecasters say, with heavy showers set to add to yesterday’s rain which submerged roads and threatened to cut villages off.

The Met Office warned that fast-flowing and deep floodwater in East Anglia posed a ‘danger to life’ after issuing an amber weather warning for the region yesterday. 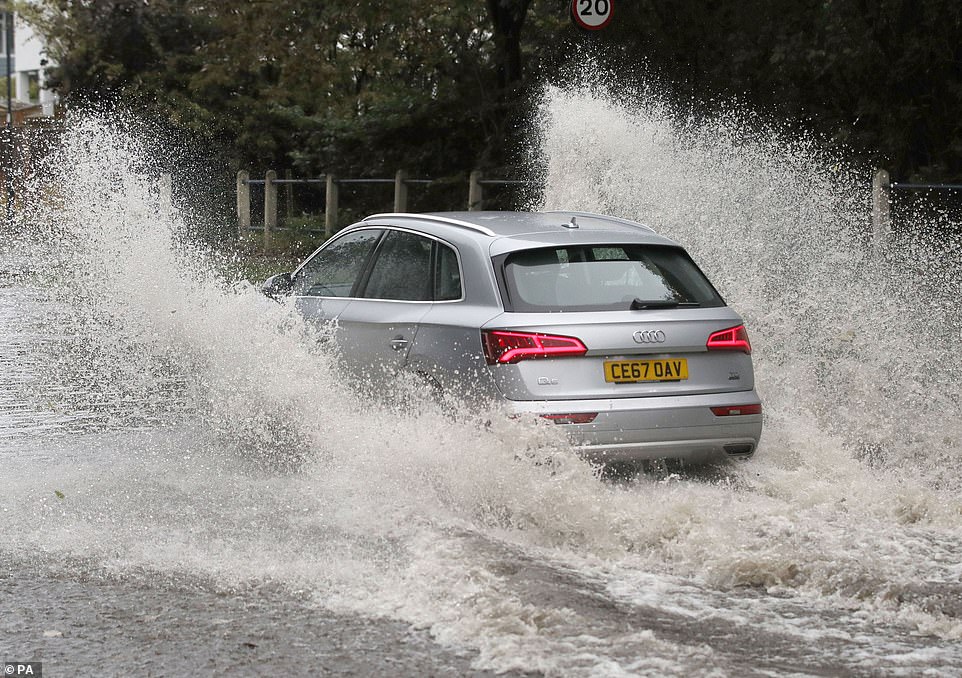 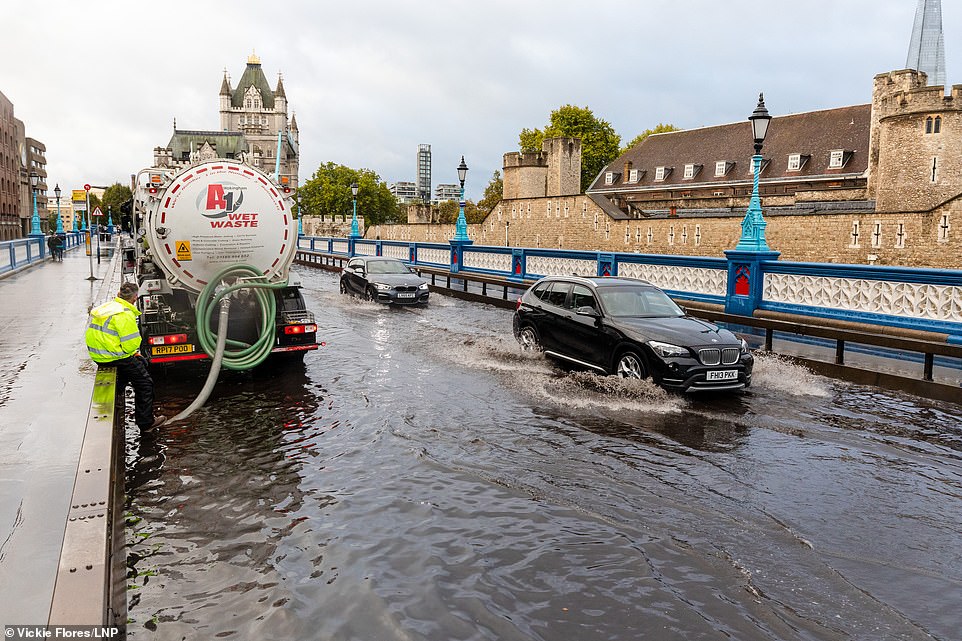 Police in Norfolk warned drivers to avoid travel unless essential, while firemen said they were ‘inundated’ with call-outs – at one stage dealing with 105 weather-related incidents.

The wettest place yesterday was Stradbroke, Suffolk, where 47.2mm (1.85in) of rain fell in 12 hours – almost three quarters of the average rainfall for October for East Anglia (2.55in).

The Environment Agency had six flood warnings in place this morning – for imminent flooding – and 32 flood alerts, mostly in northern England and East Anglia.

The rain had already brought downpours to the rest of the country through Saturday night into Sunday. 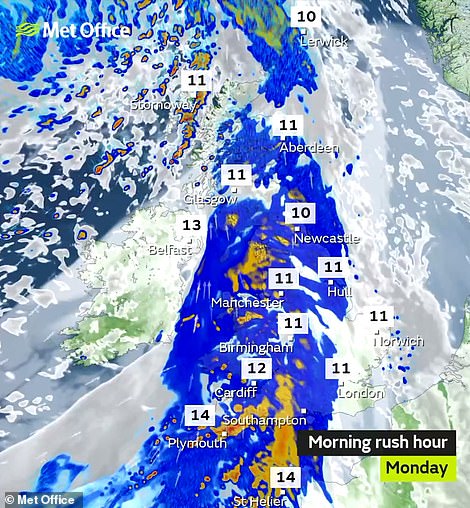 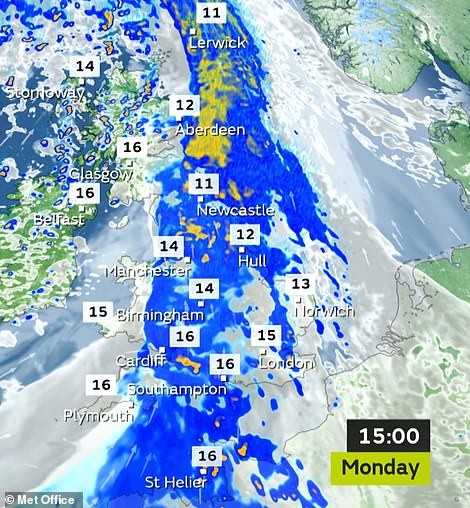 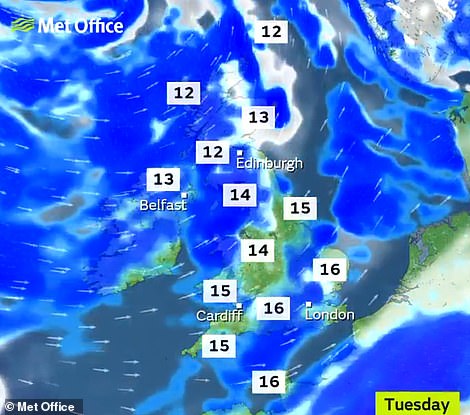 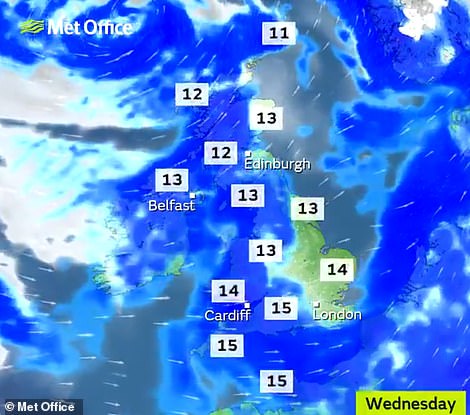 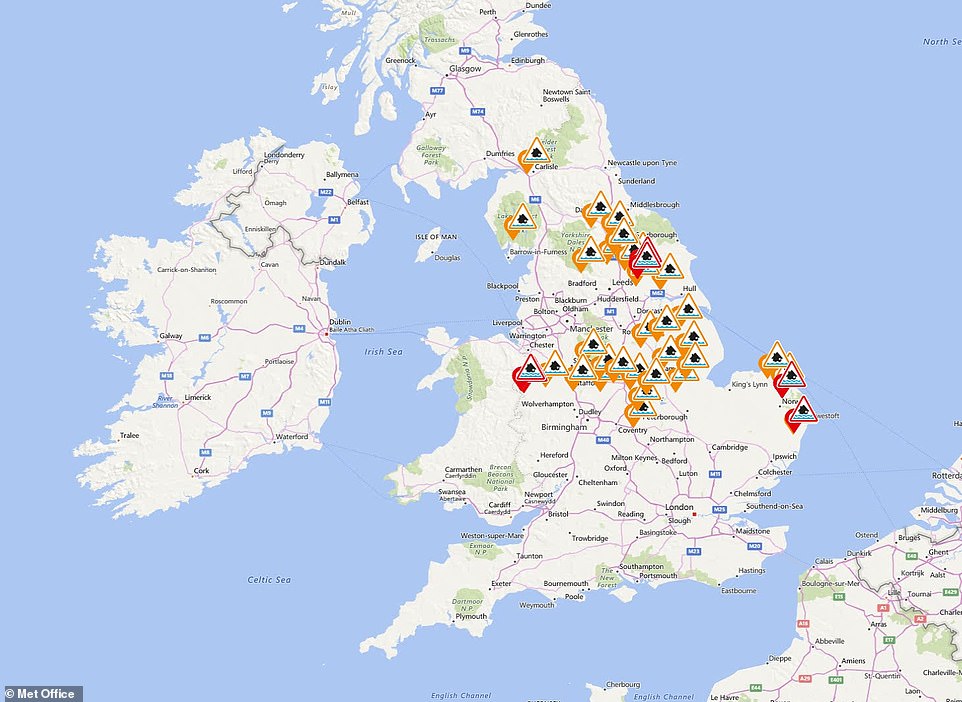 Water pumps cleared flooding on the approach to Tower Bridge in London and people shared photos on social media of traffic ploughing through pools of water on roads. 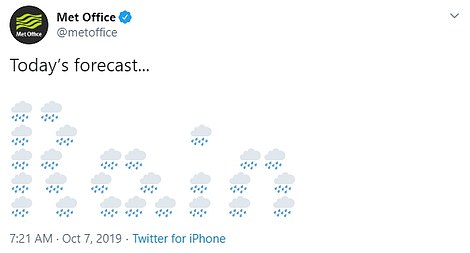 The Met Office posted this comical tweet about the forecast

Looking ahead, a wet and windy week is predicted as another frontal system looks set to come across the country – bringing up to half an inch of rain today.

The Met Office’s Luke Miall said: ‘The worst of the rain is likely to be from a weather front crossing the country today, the heaviest of which is due in the West.’

He added that a mixture of sunshine and heavy, squally showers are likely until Thursday.

‘We could see gales around the coasts, particularly in north-west England, where gusts of 40mph are possible in Cumbria and Lancashire,’ he added.

Further south, speeds could hit 35mph along the Channel coast, and 25mph inland.