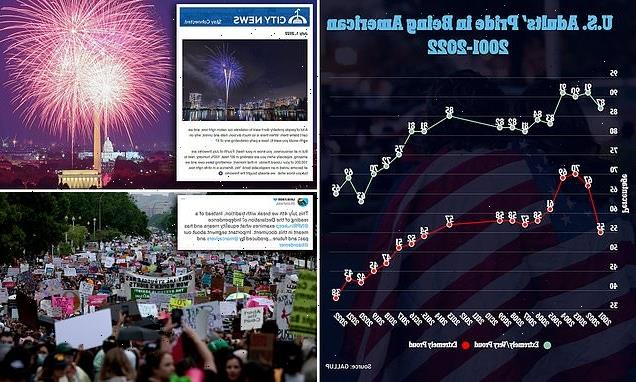 Proud to be an American? Record low 38% of people say they’re ‘extremely proud’ as Florida county says there’s no reason to celebrate Fourth of July because U.S. is ‘full of hate’ and woke NPR breaks 33-year tradition of reading Declaration of Independence

Only 38% of United States citizens say they’re ‘extremely proud’ to be American this Fourth of July.

American patriotism has been trending downward since 2015 and elected leaders are aware of it.

Officials in Orlando, Fla., seemingly mocked the anti-American sentiment in a recent promotion for their Independence Day festivities, saying people ‘probably don’t want to celebrate our nation right now’ because there’s ‘so much division, hate and unrest.’

Similarly, woke NPR broke its 33-year-old tradition of reading the Declaration of Independence to its listeners on July 4 and instead decided to ‘examine what equality means and has meant in this document.’ 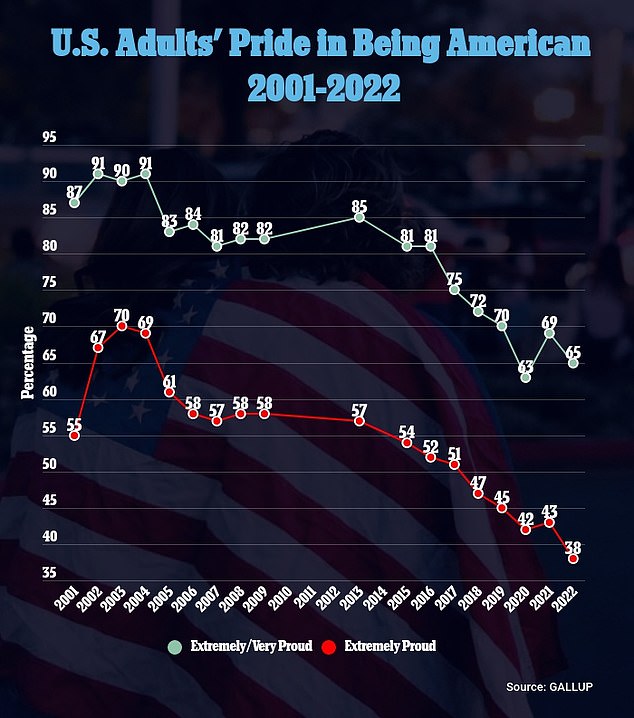 Only 38% of U.S. citizens say they’re ‘extremely proud’ to be American

Only 38% of adults claimed to be ‘extremely proud’ to be American, followed by 27% who were ‘very proud’ and 22% who were ‘moderately proud.’

Sixty-five percent of Americans expressed general ‘pride’ in the nation, while 9% said they were ‘only a little’ proud and four percent were ‘not at all’ proud.

On average, over the past two decades, 55% of U.S. citizens have reported feeling extremely proud in the nation and 80% are very proud.

Gallup claims feelings of patriotism have been on the decline since 2015, before former President Donald Trump was elected in 2016.

Republicans’ ‘extreme pride’ peaked in 2019, at the height of Trump’s presidency, while Democrats reported all-time low levels of patriotism.

Democrats have become more proud under President Joe Biden, but the party is still reporting low-levels of extreme pride.

Prior to 2015, no less than 55% of people said they were extremely proud to be American. The highest readings of pride were reported after the 9/11 terrorist attacks, a time in which patriotism surged in the U.S. 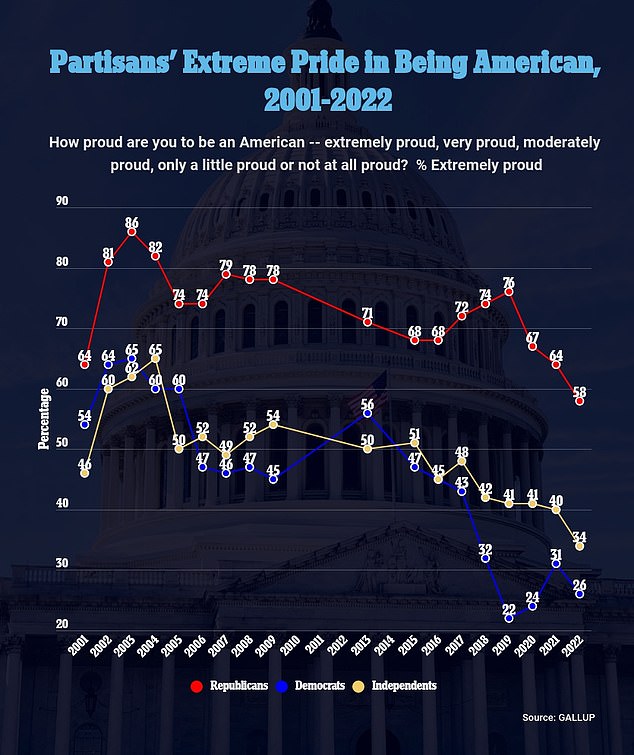 Republicans’ ‘extreme pride’ peaked in 2019, at the height of Trump’s presidency, while Democrats reported all-time low levels of patriotism. Democrats have become more proud under President Joe Biden, but the party is still reporting low-levels of extreme pride

The city of Orlando hasn’t turned a blind eye to the declining levels of patriotism and on Saturday sent out a promotion for their fireworks display in which they acknowledged some citizens may not feel like celebrating.

‘A lot of people probably don’t want to celebrate our nation right now, and we can’t blame them. When there is so much division, hate and unrest, why on earth would you want to have a party celebrating any of it?’ an official city email said.

City leaders encouraged residents to come view the fireworks for their enjoyment, despite the current state of the nation.

‘But in all seriousness, you know in your heart, Fourth of July fireworks are amazing, especially when you are standing in 90° heat, 100% humidity, next to 100,000 of your closest friends,’ the city wrote.

Officials alleged that during the celebration ‘something takes over’ and all people become ‘united in an inexplicable bond.’

‘Yes, America is in strife right now, but you know what…we already bought the fireworks,’ the email concluded. 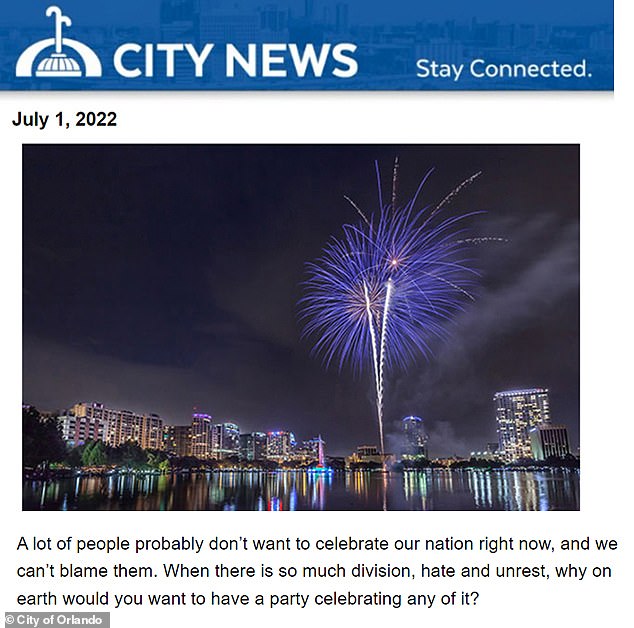 Officials in Orlando, Fla., seemingly mocked the anti-American sentiment in a recent promotion for their Independence Day festivities. The city said people ‘probably don’t want to celebrate our nation right now’ because there’s ‘so much division, hate and unrest’ 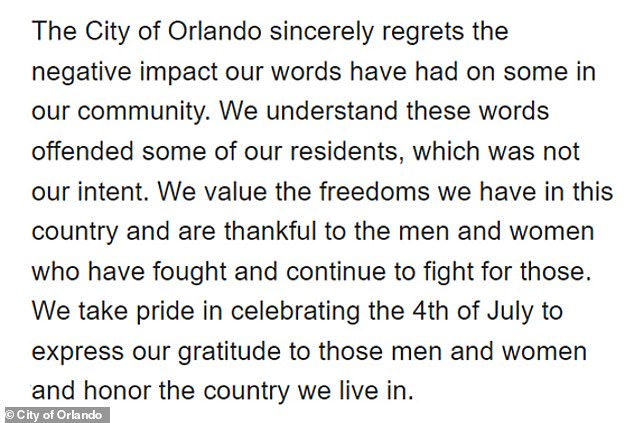 The seemingly sarcastic email was met with backlash, prompting the city to later issue an statement expressing their ‘regrets’ over the ‘negative impact our words have had on some in our community’

The seemingly sarcastic email was met with backlash, prompting the city to issue an statement expressing their ‘regrets’ later Saturday.

The city apologized for the ‘negative impact our words have had on some in our community’ and for offending Orlando residents.

‘We understand these words offended some of our residents, which was not our intent,’ the email read. ‘We value the freedoms we have in this country and are thankful to the men and women who have fought and continue to fight for those.’

Officials continued: ‘We take pride in celebrating the 4th of July to express our gratitude to those men and women and honor the country we live in.’

The initial email was also met with public objections by the Orlando police union, which wrote on Facebook: ‘We do not share the same views as the City of Orlando and find their comments inflammatory and in poor taste.

‘The members of the Fraternal Order of Police Lodge 25 are proud Americans who will continue to serve with Courage, Pride and Commitment to uphold their oath to defend our community and this country,’ the union added.

They later thanked the city for issuing their apology and encouraged citizens to have a ‘safe and wonderful day celebrating our nation’s independence.’ 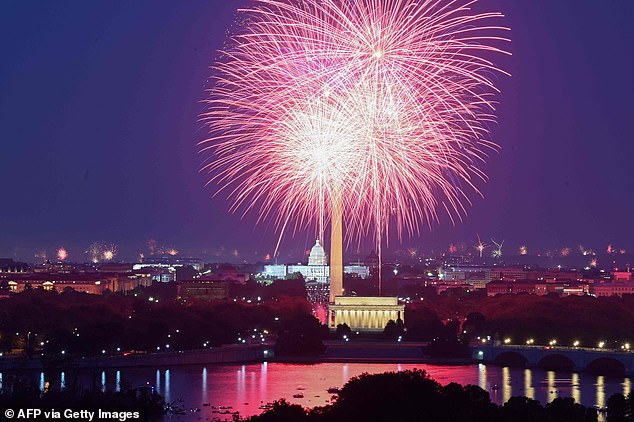 American patriotism has been trending downward since 2015. Fireworks are pictured above the Lincoln Memorial in Washington D.C. on July 4, 2021 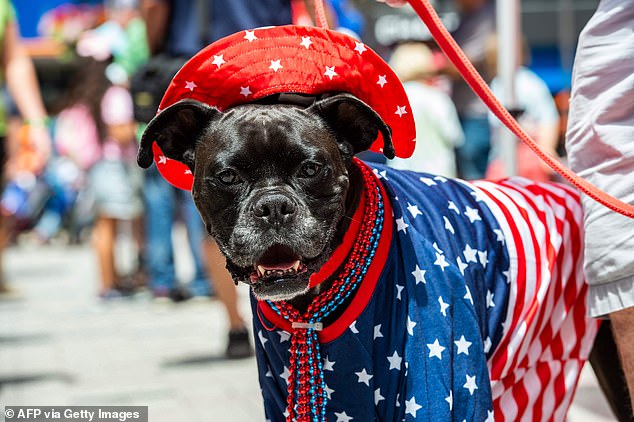 A dog wears US Flag outfit during the Patriotic Pooch Parade in Boston on July 3, 2022

Host Leila Fadel took to Twitter early Monday morning to announce she and her co-host, Steve Inskeep, wouldn’t be reading the document on-air.

Instead, the pair ran an 11-minute segment that examined ‘what equality meant in this document.’

The group discussed the document’s founding, which declared the U.S. to be independent from Great Britain and the rule of King George 111.

They analyzed the declaration’s text and what the Founding Fathers intended when they penned it. 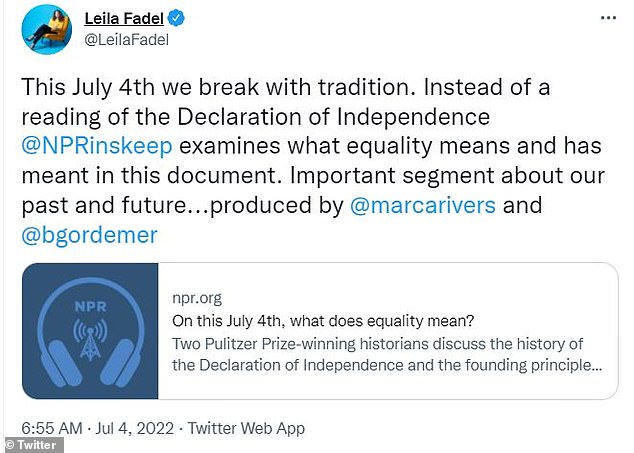 The analytics and advisory company noted they polled citizens between June 1 and 20, after the U.S. saw it’s highest inflation rate in more than four decades.

The survey was also conducted after a string of vicious shootings ripped across the US in recent weeks.

Thirteen were shot, 10 fatally, at a supermarket in Buffalo, New York on May 14 by a self-proclaimed white supremacist who had targeted a black community.

Four members of the Tulsa, Okla., community were murdered on June 1, when a gunman stormed St. Francis Hospital.

Additionally, the nation saw the deadliest school shooting in U.S. history on May 24, when a teenage gunman stormed Robb Elementary School in Uvalde, Texas and killed 19 students and two teachers.

Bipartisan gun legislation in response to the shootings was passed shortly after Gallup’s poll ended, which analysts suggest could’ve impacted some results.

The survey had also concluded before the Supreme Court ruled to overturn Roe v. Wade, which guaranteed abortion rights in the U.S., causing uproar across the nation.

The overturning of Roe means that individual states now have the power to decide on whether to ban abortion. The Guttmacher Institute, a pro-choice research group, has said that 26 states are ‘certain or likely’ to ban the procedure.

Immediately following the overturning of Roe, abortion was outlawed in 18 states, thanks to specially devised ‘trigger laws’ and historic bans that were automatically reenacted after the June 24 ruling. 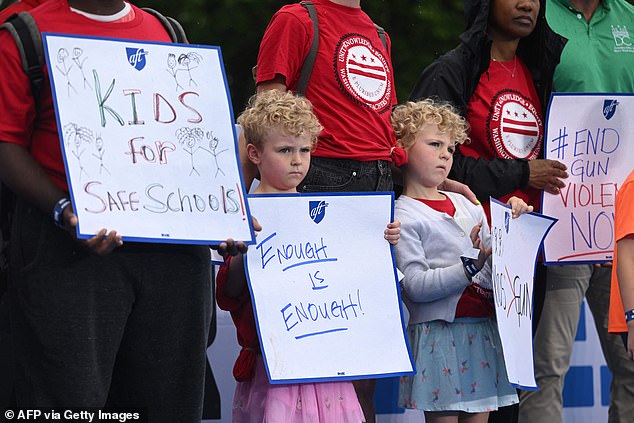 Gallup alleges the declining levels of American pride may stem from recent political events, including the string of mass shootings across the U.S. Demonstrators are seen protesting gun violence in D.C. on June 11 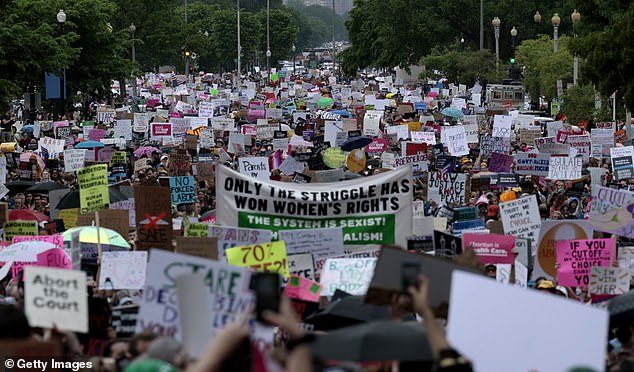 Americans have also expressed outrage over the Supreme Court’s decision to overturn Roe v. Wade, which guaranteed abortion rights in the U.S. Abortion-rights demonstrators are pictured marching in D.C. on May 14 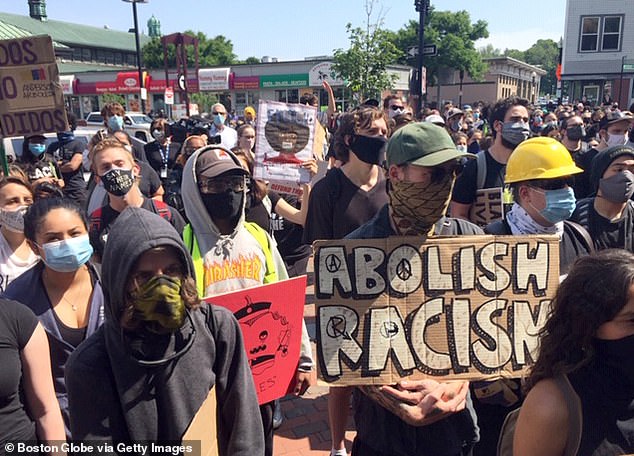 A group of protesters are pictured in Boston on June 10, 2020. They were calling for the defunding of police and to remove officers from schools

Additionally, President Joe Biden has become deeply unpopular among Americans with an overwhelming and growing majority of citizens saying the U.S. is heading in the wrong direction under his leadership.

Eighty-five percent of U.S. adults say the country is on the wrong track, and 79 percent describe the economy as poor, according to a new survey from The Associated Press-NORC Center for Public Affairs Research.

The findings suggest Biden faces fundamental challenges as he tries to motivate voters to cast ballots for Democrats in November’s midterm elections.

Inflation has consistently eclipsed the healthy 3.6% unemployment rate as a focal point for Americans, who are dealing with particularly sharp spikes in gasoline and food prices.

The average cost of consumer goods rose 8.6% in May, according to the most recently available data, the highest increase since 1981.

Driving the record surge was a 48.7% increase in gas prices and nearly 40% increase in airfare, as millions across the country are feeling pain at the pump over the steep months-long rise. 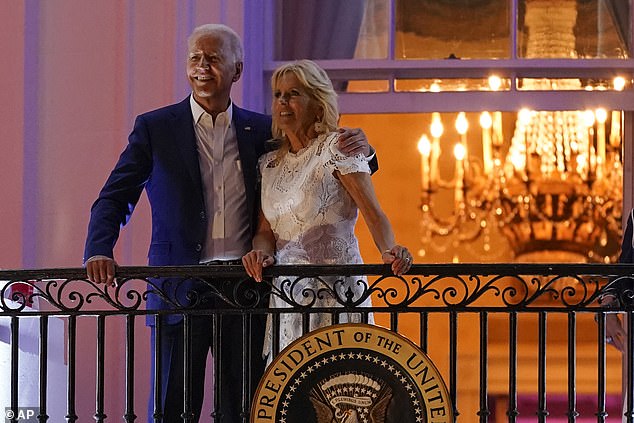 President Joe Biden (pictured with First Lady Jill Biden on July 4, 2021) has become deeply unpopular among Americans with an overwhelming and growing majority of citizens saying the U.S. is heading in the wrong direction under his leadership 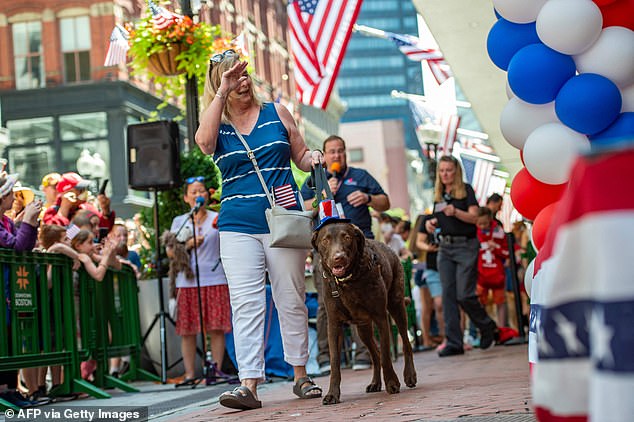 Dogs wearing patriotic costumes make their way past fans and judges during the Patriotic Pooch Parade in Boston, Mass., on July 3

The poll shows only 39% of Americans approve of Biden’s leadership overall, while 60% disapprove.

His approval rating fell to its lowest point of his presidency last month and remains there. He was  hit even harder on the economy, with 69% saying they disapprove of him on the issue. Among Democrats, 43% disapprove of Biden’s handling of the economy.

The president’s average approval rating dipped below 50% in mid-August, according to poll aggregator FiveThirtyEight. His disapproval rating exceeded that threshold in late October. 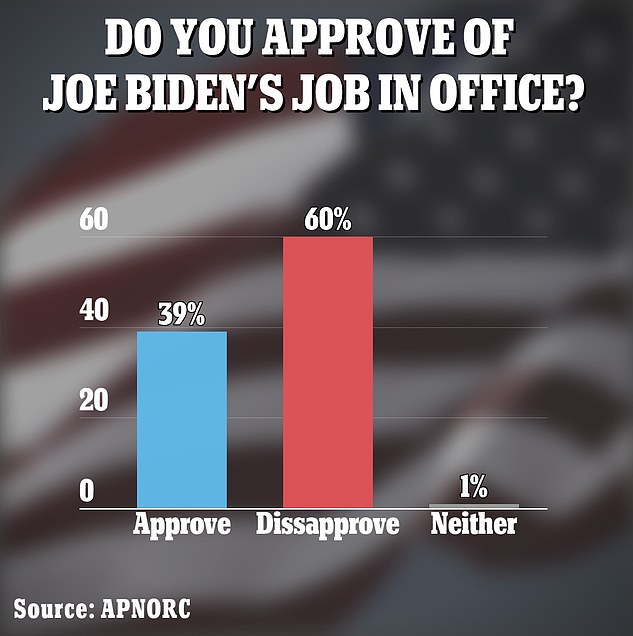 A majority of people still don’t approve of President Joe Biden’s work in office, despite easing from a record high in May 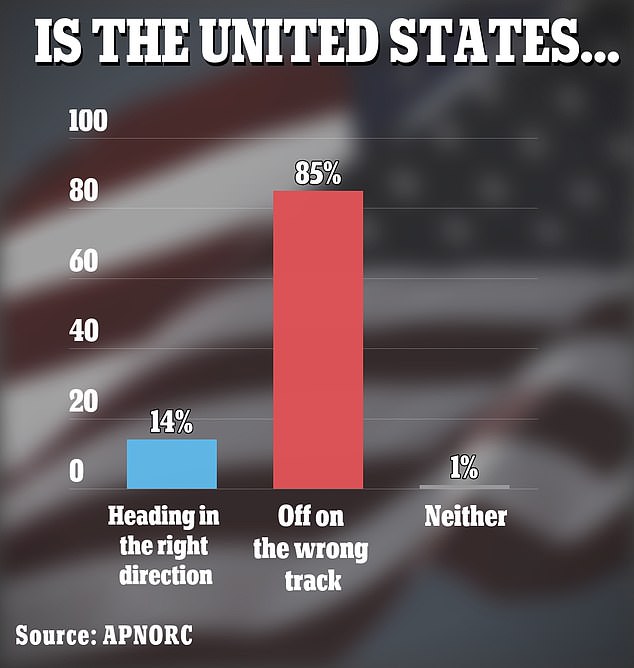 A staggering number of voters also believe the country is off on the wrong track amid multiple supply shortages, a possible looming recession and record inflation 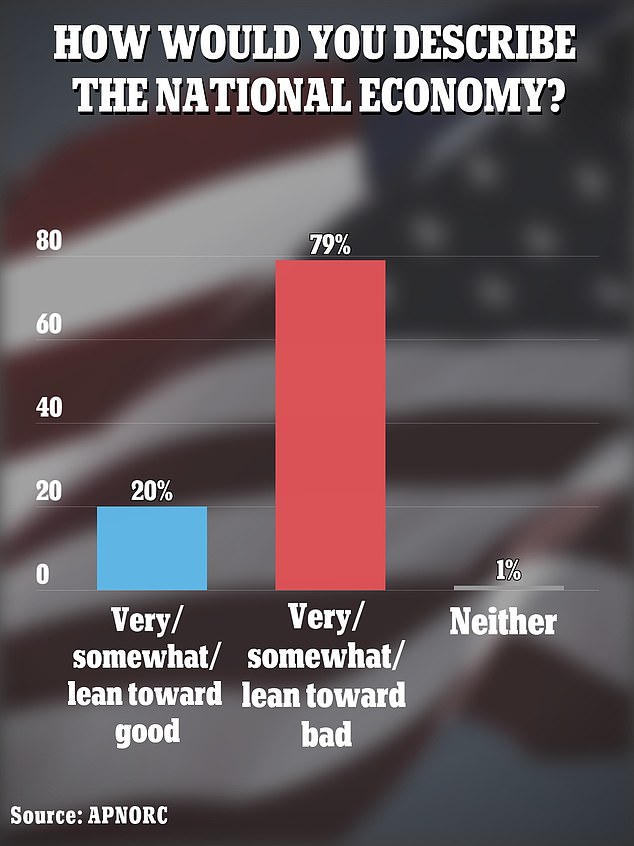 People’s pessimism is primarily with the economy, which almost eight in 10 Americans surveyed said was in poor condition

Many interviews taken for the AP’s poll were conducted after the Supreme Court struck down Roe v. Wade, allowing states to ban abortion — a decision opposed by a majority of the American people in earlier polls, which could also have contributed to the continued slump in the national mood.

In a CBS News poll released on June 26, after the Supreme Court overturned Roe, 52% of respondents said the move was ‘a step backwards’ for the country while just 31% said the opposite.

Biden’s handling of the coronavirus pandemic remains a relative bright spot, with 53% of Americans saying they approve of his handling of that issue.

On the other hand, only 36% say they approve of Biden’s handling of gun policy; 62% disapprove.

Lates News:
2022-07-04
Previous Post: Fintech-Ideas brings blockchain functionality to its range of platforms
Next Post: Another Mega Bitcoin Crash Is in the Books