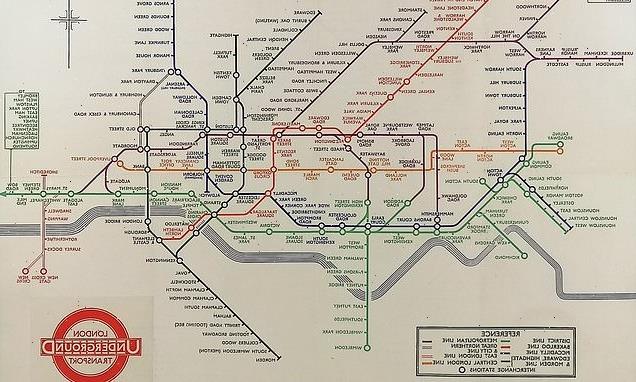 When the Underground map was SIMPLE! Rare 1933 print of London Tube diagram that was heralded for its colour-coded routes is set to fetch £45,000… as today’s passengers complain the current version is confusing

A rare early version of the iconic London Underground map has emerged for sale for £45,000.

The poster showing draughtsman Harry Beck’s revolutionary layout of the capital’s underground stations and lines was printed in August 1933.

At the time eight London Underground lines were in operation with the Victoria Line and Jubilee Line added years later.

The Waterloo & City had existed as a tube line since opening in 1898 but did not feature on Beck’s map or many others because it was operated separately from the London Underground network until 1994.

Although it now features on the latest Transport For London map, the newly-opened Crossrail Elizabeth Line is not formally part of the London Underground network.

There were 2,000 printed in this batch but there are less than ten surviving examples.

Most posters were destroyed after they were pasted to station walls so they are extremely scarce.

The map’s sale comes after some people on social media condemned the new London Underground map for being too complicated.

One said: ‘The map is just ridiculous – truly a set of lesson in what never to do when designing a transit map.’

The map was also criticised because of additions of IKEA logos in places where the Swedish department store has outlets, following TfL’s sponsorship deal with the firm. 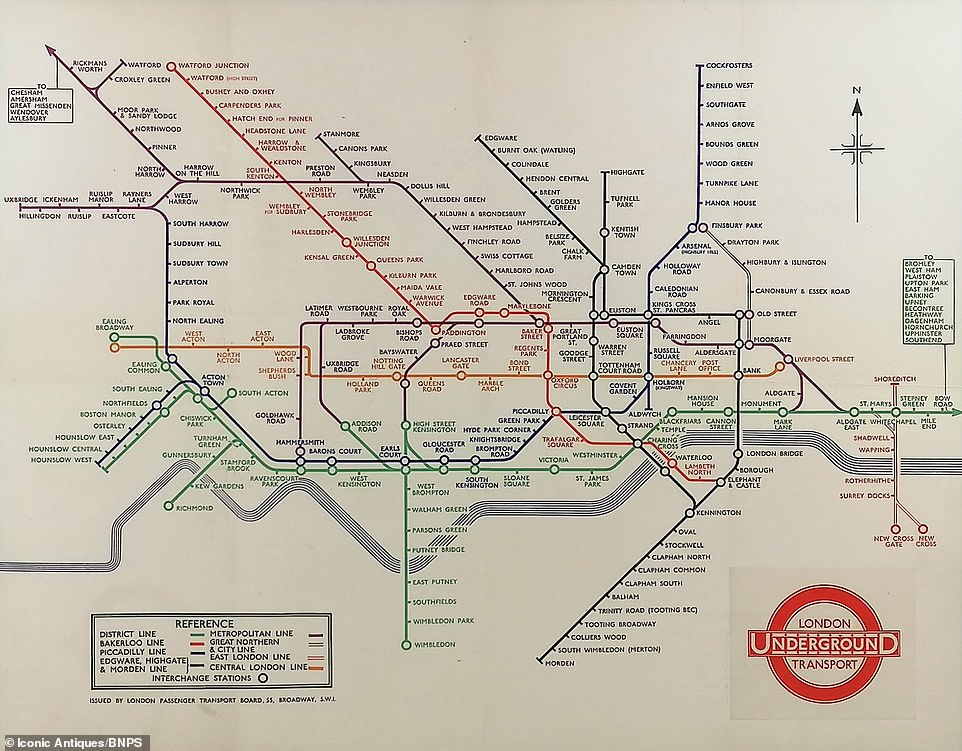 A rare early version of the iconic London Underground map has emerged for sale for £45,000. The poster showing draughtsman Harry Beck’s revolutionary layout of the capital’s underground stations and lines was printed in August 1933 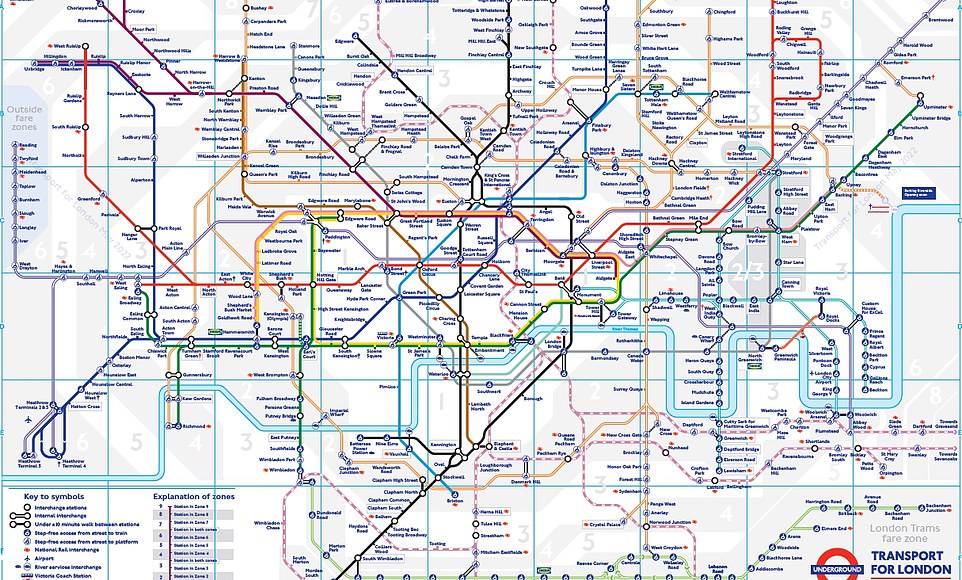 The current London Underground network has 11 lines, not including the new Elizabeth Line, which is considered separate by Transport For London. Above: The latest map

Who was Harry Beck and how did he come up with the classic tube map design?

Harry Beck was born in east London on June 4, 1902 and began his career as an engineering draughtsman at the London Underground Signals Office during the 1920s.

His job was to draw schematics for the electrical systems of the London Underground.

Beck actually designed the underground map when he was unemployed – showing that he hadn’t been following the guidance of employer.

He assumed that passengers using the Tube were more bothered about finding their way than geographical accuracy and so made sure it was as clear as possible and outlined the overall network, rather than depicting the exact distance between stations.

Despite the map being iconic across the world, Beck’s original was initially rejected because it was deemed as too radical.

However after a successful trial run, it was clear that it was what the public wanted.

Following the building of the underground system in Victorian times, the early maps featured the different lines laid out geographically and superimposed on the roadway of a city map.

This meant central stations were shown very close together, making them difficult to differentiate, while those on the outskirts were spaced far apart.

Beck solved this problem with his iconic design created in 1931, but it did not see the light for two years because it was considered too radical.

His layout, which was initially published in a small pamphlet, was immediately taken to heart by Londoners.

Notable additions to the underground network since Beck’s design are the Victoria Line (1960), Jubilee Line (1979) and the Elizabeth Line, which opened this week.

Beck’s 30ins by 24ins poster, which is in ‘excellent’ condition, is being sold by dealer Iconic Antiques at this year’s London Map Fair.

Chris Berry, of Iconic Antiques, said: ‘I acquired the poster three years ago from the previous owner who had had it since the late 60s.

‘They had purchased it from dealer Mike Higson trading in Harrow, Middlesex.

‘He was immediately commissioned to redraw the diagram in poster format, first in Quad Royal size published in July 1933 (50ins by 40ins) and then this format published in August 1933.

‘There were 2,000 produced in this format but most were destroyed so there must be less than ten survivors today.

‘Though almost identical to the January 1933 design, this map benefits from a few small improvements Beck made over the first half of 1933; notably replacing the diamond interchange stations with circles and addressing the awkward Met Line right angle between Notting Hill Gate and Paddington.

‘The north pointer, which was added by someone else, was a source of much frustration for Beck, as it was inappropriate for this type of map.

‘Beck’s design has become more than a map, it’s a London visual icon.’

The map will be displayed at the London Map Fair on June 11-12.

History of the London Underground: The world’s first underground railway dating back to 1863

As a solution to solve the problems of increased traffic congestion, the 1855 Act of Parliament was passed giving a green light to the construction of an underground rail network between Paddington and Farringdon Street via King’s Cross.

The Metropolitan Railway, the world’s first underground railway, serving six stations, opened back in 1863, and the following year the Hammersmith and City Railway opened.

The underground railways rapidly expanded and eventually incorporated New Cross on the East London Railway and Whitechapel and Hounslow and Wimbledon on the District.

The Metropolitan expanded into the north-east of the city, creating a new suburb dubbed ‘Metro-land’ in the process which included Chesham, Watford and Harrow.

With the advancement of digging technologies, by the late 19th century the first tube lines were being created, and in 1890 the City and South London Railway, which now comprises of part of the Northern line, was opened.

In 1900 the Central London Railway – now known as the Central line – was opened, which spanned from Bank to Shepherd’s Bush.

Draughtsman Harry Beck submitted the colour-coded design in 1931 and it was initially rejected, but a successful trial in 1932 led to the map being published in 1933.

Beck’s iconic design first appeared in January 1933 as a folding pocket map and appeared on the walls of underground stations two months later.

The Northern line was opened in 1937 and was created out of two separate railways. It expanded a little between Archway and East Finchley, High Barnet and Mill Hill East in 1939 to 1941, but World War Two slowed the expansions down.

In 1948, the Labour government – along with the four mainline railway companies – nationalised the ever-expanding network, becoming the London Regional Transport, which was eventually replaced by Transport for London in 2000.

Most of the central London network was built in the Underground’s first 50 years with first new line, the Victoria line, opening in 1968.

It was followed by the Jubilee Line in 1979, which was extended to London’s Docklands, London’s former docks, in 1999.

Notable additions to underground network since Beck’s design are the Victoria Line – built in 1960 – and Jubilee Line (1979).

Lates News:
2022-05-26
Previous Post: Ariva Celebrates 1st Year Anniversary With Impressive Achievements in the Blockchain Industry – Press release Bitcoin News
Next Post: Our town pulled DOWN our Platinum Jubilee decorations as they're too LOUD – it's miserable