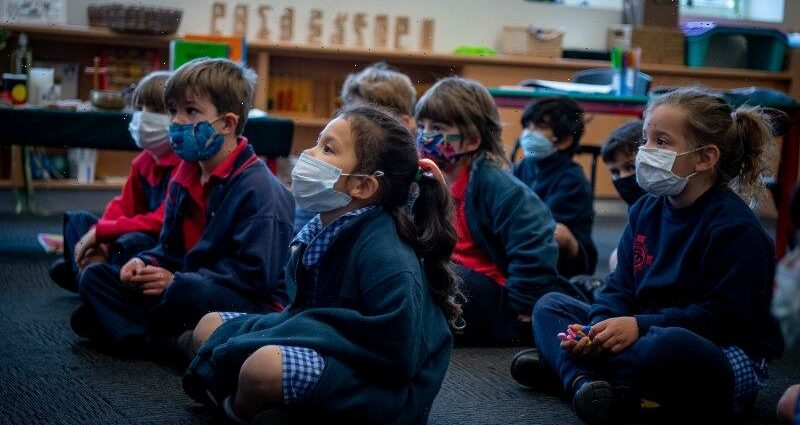 Schoolchildren who are primary close contacts of a COVID-19 case will soon be able to return to the classroom if they record a negative rapid test result, under a trial aimed at cutting the number of missed school days.

The Victorian government hopes the pilot will pave the way for widespread use of 15-minute rapid antigen tests across society to minimise the number of people quarantined and disruption caused by large cohorts being locked out of work and other daily activities. 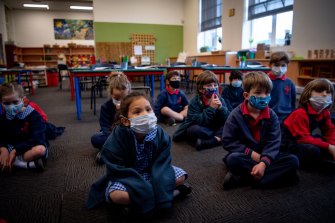 Prep students on their first day at St Margaret Mary’s school in Brunswick this week.Credit:Eddie Jim

Selected schools will take part in the trial, according to a government source speaking anonymously because details have not been finalised, before the program is rolled out widely if the trial is successful.

Under the trial, schools will be responsible for collecting and managing the results of rapid tests, rather than the Health Department. This represents a shift away from a centralised testing regime towards a model where organisations like schools and hospitals play a greater role in managing cases as COVID-19 spread is normalised.

Dozens of schools are experiencing COVID-19 outbreaks and more than 200 have had shutdowns this term. Students aged over 12, who can be vaccinated, must isolate for a week if they are exposed to the virus while younger children who can’t be vaccinated must isolate for two weeks. There are tens of thousands of Victorians in quarantine.

The trial will allow some children to get tested quickly before school and avoid lengthy spells at home.

COVID-19 commander Jeroen Weimar said on Saturday the number of schoolchildren in isolation was concerning.

“We’re seeing a significant number of schools now where cases are coming in, being identified and then other kids having to be isolated as primary contacts, so we’re concerned about that,” he said.

Meredith Peace, Victorian president of the Australian Education Union, said using rapid tests would help keep children and teachers in classrooms to make the most out of the rest of the school year.

Ms Peace said some teachers were effectively running dual classrooms with students in isolation at home while others remained in the class. “That adds a huge amount of work and it’s disruptive,” she said.

Rapid tests are already being trialled at some government infrastructure projects and hospital emergency departments. The government wants to reduce the number of people being quarantined as outbreaks become more common but less dangerous in a highly vaccinated society. 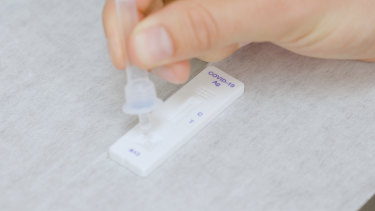 The CareStart COVID-19 Antigen rapid test is one of the products already approved for use in Australia.

The use of rapid tests will also be key to kicking the CBD back into gear, according to lord mayor Sally Capp. Along with the Property Council of Victoria, she is pushing the state government to reinvigorate the CBD by allowing workers to remove masks at their desks and directing private and public sector staff to work from offices a few days a week.

Self-testing kits that don’t require medical supervision have been approved by the Therapeutic Goods Administration and will be available from November 1. Some are oral fluid tests, requiring people to spit into a tube, and others use a self-administered nasal swab.

They will be available at pharmacies, convenience stores and online. The Victorian government has purchased 2 million and will use them in government-administered places like schools. The ability to easily purchase the tests will allow private organisations to use rapid tests as they see fit; for example, large CBD companies may allow workers to enter only if they have returned a negative result in the lobby, or an aged care home may use rapid tests to screen visitors.

The quick-turnaround tests are used widely in Europe and North America. Rapid testing kits cost about $40 in Germany, between $6 and $40 in the US and between $8 and $13 from one Australian wholesaler. They work similarly to a pregnancy test, whereby a swab is placed in a solution to drip onto a paper and test for a result.

Cr Capp said her council was in discussions with the state government about how rapid tests could be used to get more people into live events and also revealed a new round of CBD spending vouchers and a busker program would soon be announced.

“We see [the tests] as key in getting people back into the office, but also in potentially welcoming more people to events. If an event cap is 5000, could we make it 10,000 [with the additional safety provided by screening people]?” she said.

“They are terrific because it’s technology that’s well-used and understood, it’s relatively affordable, it’s accessible, it’s easy to use and gives immediate ratification on somebody’s status.”

CBD office occupancy dropped to 6 per cent in September, its lowest level during the pandemic, with business groups and Cr Capp pushing the government to nudge workers to return to their desks this year rather than waiting until the start of the next working year around Australia Day. 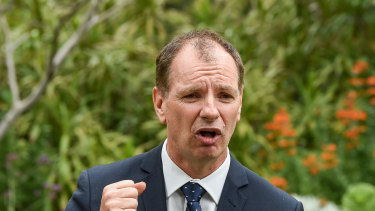 “The city environment is unique; it’s not replicable. We need to nurture it and repair it.”

City Christmas decorations will be put up two weeks earlier than the usual December date. Other events that will draw crowds before Christmas include the launch of Moulin Rouge! and Harry Potter theatre productions, Fashion Week, Music Week, the spring racing carnival and the Play On Victoria music concert supported by the state government.

The opposition MP with responsibility for CBD recovery, David Southwick, urged the government to fast-track the return to CBD offices and said it was wrong that hospitality businesses could open but retail businesses remained shut.

“The CBD is on life support … It is absolutely dead,” he said at the Block Arcade in Bourke Street. “There’s no plan under this government to rebuild the city.”

A state government spokesman said the government had invested $107 million to revitalise the CBD. “The return of plays and musicals to our theatres will be important in building the momentum of the recovery,” the spokesman said.

“We’ll have more to say on crowds for our theatres and other significant venues soon.”

Stay across the most crucial developments related to the pandemic with the Coronavirus Update. Sign up for the weekly newsletter.