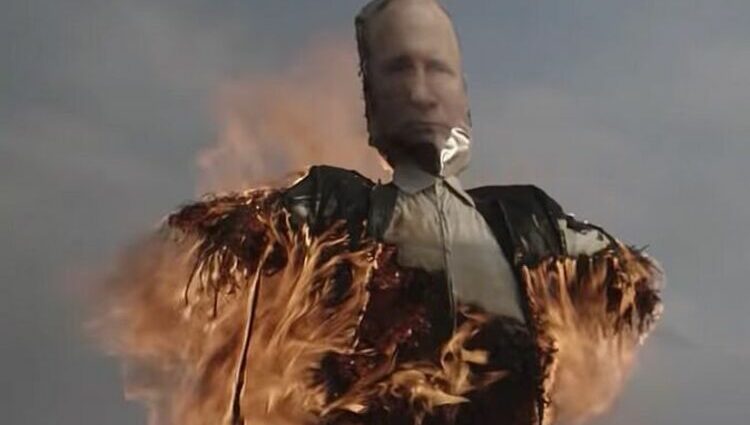 Vladimir Putin pushed several of his detractors into leaving Russia for good after years of cracking down on any form of dissent. Tbilisi, the capital of Russia’s neighbour Georgia, has seen a surge of political migrants moving in since the invasion of Ukraine, with many finally able to take part in anti-Putin protests without fear of arrest. Footage from demonstrations against the war filmed earlier this week capture the moment an effigy of the Russian President was set ablaze as the protestors danced around it.

The Russian Parliament in early March voted in favour of a new law effectively shutting down any chance of dissent against the war in Ukraine, with anyone discussing the war threatened with up to 15 years in prison.

Activist Alisa Kuznetsova moved to Georgia within days of the conflict starting with her husband and she is adamant she will not be returning to Russia “anytime soon.”

Speaking to CNN, she said: “It was like an additional trigger, I just had to leave. I’m just trying to take it in stride, and signal as much as I can.

“I loved my life there but I’m not returning there anytime soon.”

“Some even taking part in recent protests where an effigy of Putin was burned. But they’re sometimes grouped in with Putin and his supporters nonetheless.”

While understanding of the criticism, Ms Kuznetsova admitted her dismay at all Russians being seen around the world as Putin supporters.

She added: “It’s not nice knowing that you’re the Nazis now.”

According to the Georgian Government, over 30,000 Russians have made the journey across the border to start a new life in the former Soviet republic.

Alexey Voloshinov last month joined the thousands of Russians choosing to leave his country over his opposition to the invasion of Ukraine.

Speaking last month before his departure, the 20-year-old said: “It feels like real, not real. I still cannot believe that tomorrow I’m going to leave my country maybe for my whole life. I hope not, but this is a possible option.

“But still, I would really like to come back one day to the great Russia of future. Future great Russia, yeah.”

Mr Voloshinov had initially moved to Armenia but after being informed that the Russian Army was looking for him, he relocated to Georgia.

He told NPR: “After just two or three days, my father called me and said that police were looking for me in Moscow.

“And that day I decided to leave Armenia and move to Georgia because there is no extradition from here.”

He added: “After I left the country, it was the first time I could sleep and eat normally.”