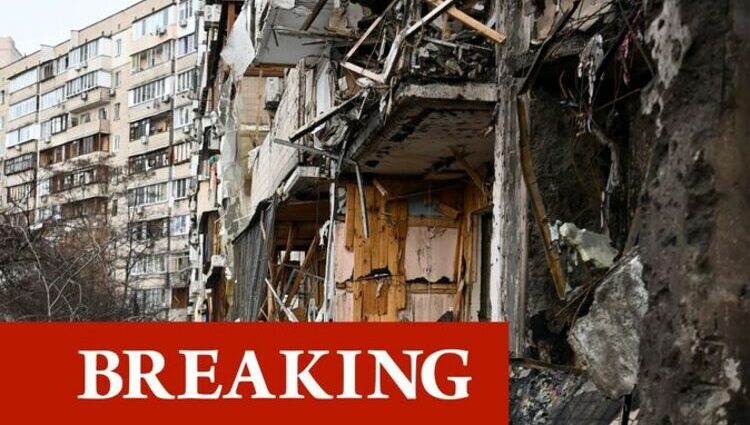 Ukraine’s state-run railway company Ukrzaliznytsya said it is not yet known if there are any casualties.

It added that the building suffered minor damage but trains are still operating.

Ukrainian interior ministry adviser Anton Herashchenko said the blast may have cut off central heating supply to parts of the capital.

“How many people were injured is unknown so far.

“How far are Russians from ISIS?”

It comes on the seventh day of Vladimir Putin’s assault on Ukraine.

Russia is increasingly isolated on the international stage after the United Nations General Assembly today overwhelmingly voted to demand an immediate end to the invasion.

The Prime Minister accused the Russian president of “abhorrent” attacks as Ukraine’s capital Kyiv braced for a siege and second city Kharkiv suffered a further pounding.

Strikes that damaged the Babi Yar Holocaust memorial in Kyiv and the central square in Kharkiv have caused horror.

Western allies fear it is a sign of a shift in Russian tactics further towards the indiscriminate targeting of urban areas.

At Prime Minister’s Questions, Mr Johnson said: “Putin has gravely miscalculated; in his abhorrent assault on a sovereign nation, he has underestimated the extraordinary fortitude of the Ukrainian people and the unity and resolve of the free world in standing up to his barbarism.”

More than 2,000 civilians have died since the invasion, Ukraine’s state emergency service said, although that figure has not been independently verified.