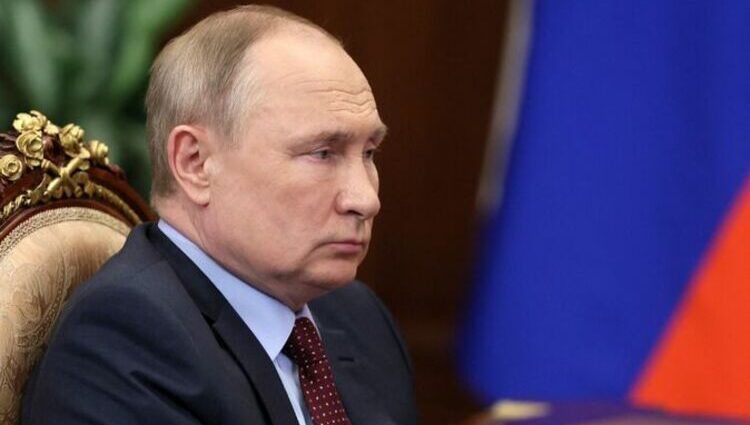 Declassified US intelligence claimed to show increasing tension between Putin and Russia’s Ministry of Defence, including minister Sergei Shoigu. American officials suggest the Russian president’s advisers are afraid to tell him how badly his military is doing in Ukraine and how sanctions are hitting Russia.

Putin’s spokesman Dmitry Peskov dismissed the claims, telling reporters: “To our regret – and, in fact, this probably even causes our concern – it turns out that neither the State Department nor the Pentagon has real information about what is happening in the Kremlin.”

Kate Bedingfield, communications director at the White House, had told reporters Russia made a “strategic error” and a lack of accurate reporting had led to “persistent tension between Putin and his military leadership”.

“This is not just a pity, but causes anxiety. Because such a complete misunderstanding – it leads to wrong decisions, to rash decisions that have very bad consequences.”

The fate of Mr Shoigu had been the subject of widespread speculation when he went unseen in public for almost two weeks last month before resurfacing.

Pentagon spokesman John Kirby said Washington believed Mr Shoigu and his subordinates were sugar-coating reports of the war for Putin.

He said: “We would concur with the conclusion that Mr. Putin has not been fully informed by his Ministry of Defence, at every turn over the last month.”

US officials told The New York Times Putin was unaware Russia was using conscripts in Ukraine and some of them had been killed.

The daily’s source said there is now persistent tension between Putin and Mr Shoigu’s ministry.

It comes as the head of GCHQ said on Wednesday new intelligence showed some Russian soldiers in Ukraine had refused to carry out orders, sabotaged their own equipment and accidentally shot down one of their own aircraft.

Jeremy Fleming said Putin had massively misjudged the capabilities of Russia’s once mighty armed forces while underestimating the resistance of the Ukrainian people and Western resolve.

He said: “Putin has massively misjudged the situation. We believe Putin’s advisers are afraid to tell him the truth.”

He added: “We’ve seen Russian soldiers short of weapons and morale – refusing to carry out orders, sabotaging their own equipment and even accidentally shooting down their own aircraft.”

Russia’s defence ministry says its armed forces are professional and carrying out their duty in Ukraine with considerable success.

It claims the West is spreading lies about what Russia calls its special military operation in a bid to undermine the country.

Russia recently reframed its objectives in Ukraine, claiming it never intended to take the capital Kyiv and other major cities.

The Kremlin now says it is focused on liberating eastern areas where Russian-backed separatists have been fighting the Ukrainian army since 2014.

Moscow’s statements have been greeted with scepticism by Ukraine and Western governments.

Ukraine’s general staff said Russian troops have started a partial withdrawal from the Kyiv region towards neighbouring Belarus, taking looted vehicles with them.

President Volodymyr Zelensky said the situation in the south and the Donbas remained extremely difficult with Russia building up forces near the besieged port of Mariupol.

The city authorities report nearly 5,000 people have been killed in Mariupol with about 170,000 people trapped without food, heat, power or running water.