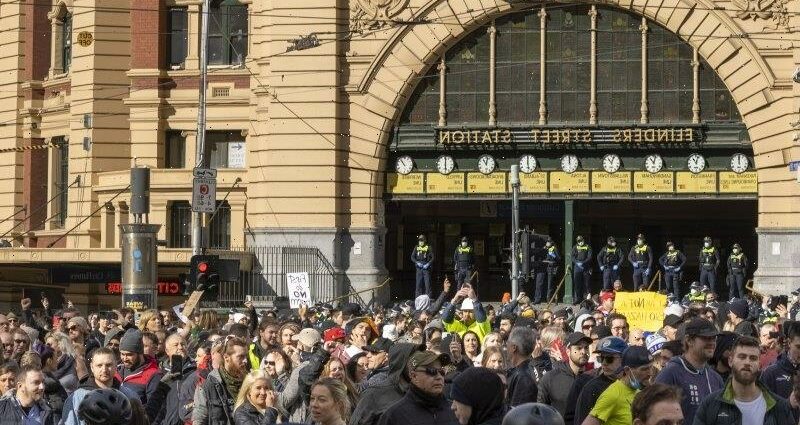 An anti-lockdown protester has been jailed for hitting a police horse in the head and throwing a heavy bollard at a mounted officer during separate protests in Melbourne.

Dennis Basic, 42, was sentenced to 26 months and 14 days in prison on Tuesday for a dozen offences, including assaulting an emergency worker, animal cruelty and recklessly causing injury. 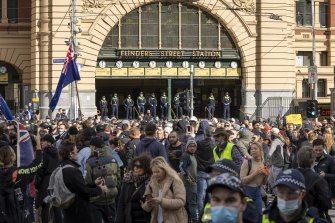 “Your attacks on two police officers and a police horse in two separate incidents nine months apart show a continued disregard for the law and disrespect towards those charged with enforcing the law,” Judge Douglas Trapnell told Victoria’s County Court.

Basic’s offending began when he breached public health orders and attended a protest in Melbourne’s CBD, where he tried to push past a police officer at a roadblock in October 2020.

He grabbed the officer, tried to fight him and then ripped the police-issued baseball cap off his head.

Minutes after, while wielding a “resist” flag, Basic hit a police horse in the head repeatedly with the flag pole.

He was charged over these offences, then officers searched his home and found a number of illegal weapons and fireworks.

While on bail, Basic attended another anti-lockdown protest in July 2021, where he picked up an orange traffic bollard.

He threw the bollard across the crowd and it struck Senior Constable Christine Brown to the head and shoulder, while she was mounted on a horse.

She said there was a risk she could have fallen off the horse, which would have resulted in the animal running, riderless, through the crowd.

“She had to put real effort into controlling her horse, presenting a real danger to the public,” Judge Trapnell said.

He said Basic’s behaviour towards police was “unwarranted, disrespectful and appalling” and the attacks were dangerous, unprovoked and “clearly lawless”.

“That police were the target in all instances increases your moral culpability and emphasises the importance of deterrence in sentencing,” he said.

He also admitted to committing offences while on bail and breaking public health directions to attend the protests.

He must serve 20 months in jail before he is eligible for parole, with 326 days already served to be included in his sentence.