SOCHI/MOSCOW (Reuters) – U.S. Secretary of State Mike Pompeo told Russia on Tuesday that Washington would brook no interference in the 2020 U.S. presidential election and wanted Moscow to take action to show there would be no repeat of its suspected 2016 meddling.

President Vladimir Putin, who met Pompeo in the Russian Black Sea resort of Sochi, pushed back, telling him that Russia never interfered in U.S. elections and that a report by U.S. Special Counsel Robert Mueller, which he praised as being “objective overall”, had found no evidence of collusion with President Donald Trump’s 2016 campaign.

Relations have long been strained by U.S. intelligence and law enforcement findings – denied by Moscow – that Russia tried to influence the results of the 2016 U.S. presidential election to boost Trump’s chances of winning the White House.

Pompeo’s visit followed the publication of the long-awaited report by Mueller into the nature of Russia’s role in that election that spoke of “sweeping and systematic” interference by Moscow but did not establish that members of Trump’s campaign conspired with Russia during the 2016 election.

Now that the Mueller report was out of the way, Putin said he hoped ties would start improving.

“I’ve formed the impression that your president wants to repair Russia-U.S. ties and contacts and wants to solve issues which are of common interest for us,” Putin told Pompeo.

“We’ve said many times that we also want to fully restore our relations. I hope that the necessary conditions for that to happen will now be created.”

Visiting Russia for the first time as secretary of state, Pompeo earlier clashed with Russian Foreign Minister Sergei Lavrov on issues from Ukraine to Venezuela. After their meeting, both men said they had been far apart on many issues.

“I made clear to Foreign Minister Lavrov … that interference in American elections is unacceptable. If the Russians were engaged in that in 2020, it would put our relationship in an even worse place than it has been,” said Pompeo. “I’d encourage them not to do that. We would not tolerate that.”

Both Lavrov and Pompeo said they shared a desire to improve battered ties despite not being able to confirm a suggestion by Trump that he would meet Putin on the sidelines of a meeting of the G20 in Japan next month.

Putin would agree to such a meeting if formally asked, a Kremlin aide told reporters.

“The United States stands ready to find common ground with Russia as long as the two of us can engage seriously,” Pompeo said.

“President Trump has made clear that his expectation is that we will have an improved relationship. This will benefit each of our peoples. And I think that our talks here today were a good step in that direction.”

A Kremlin aide said the talks had not yielded any breakthrough but had been held in a business-like atmosphere.

‘PLACES WE CAN WORK TOGETHER’

Pompeo told reporters after his talks with Putin that the two sides had a “very productive” conversation on Syria and how to move the political process there forward and were able to “make some truly constructive process points” on Afghanistan.

They also discussed North Korea, which both want to see give up its nuclear weapons.

Pompeo said Trump had made clear he wanted the to try to keep the Russia relationship “on the high ground”.

“We have places where we just have very different views,” he said of the U.S.-Russia relationship. “It’s about trying to find solutions, compromises, places where there are overlapping interests. You can make progress in unlocking some of the most difficult problems that are facing us.”

As well as the issue of interference in U.S. elections, the two sides clashed over Venezuela, with Lavrov sharply criticizing Washington for trying to undermine President Nicolas Maduro, who Pompeo said must step down in the face of an economic crisis and large-scale protests against his rule.

On Ukraine, Pompeo told Lavrov the United States would not recognize Moscow’s 2014 annexation of Crimea and would keep in place economic sanctions imposed on Russia over that move. 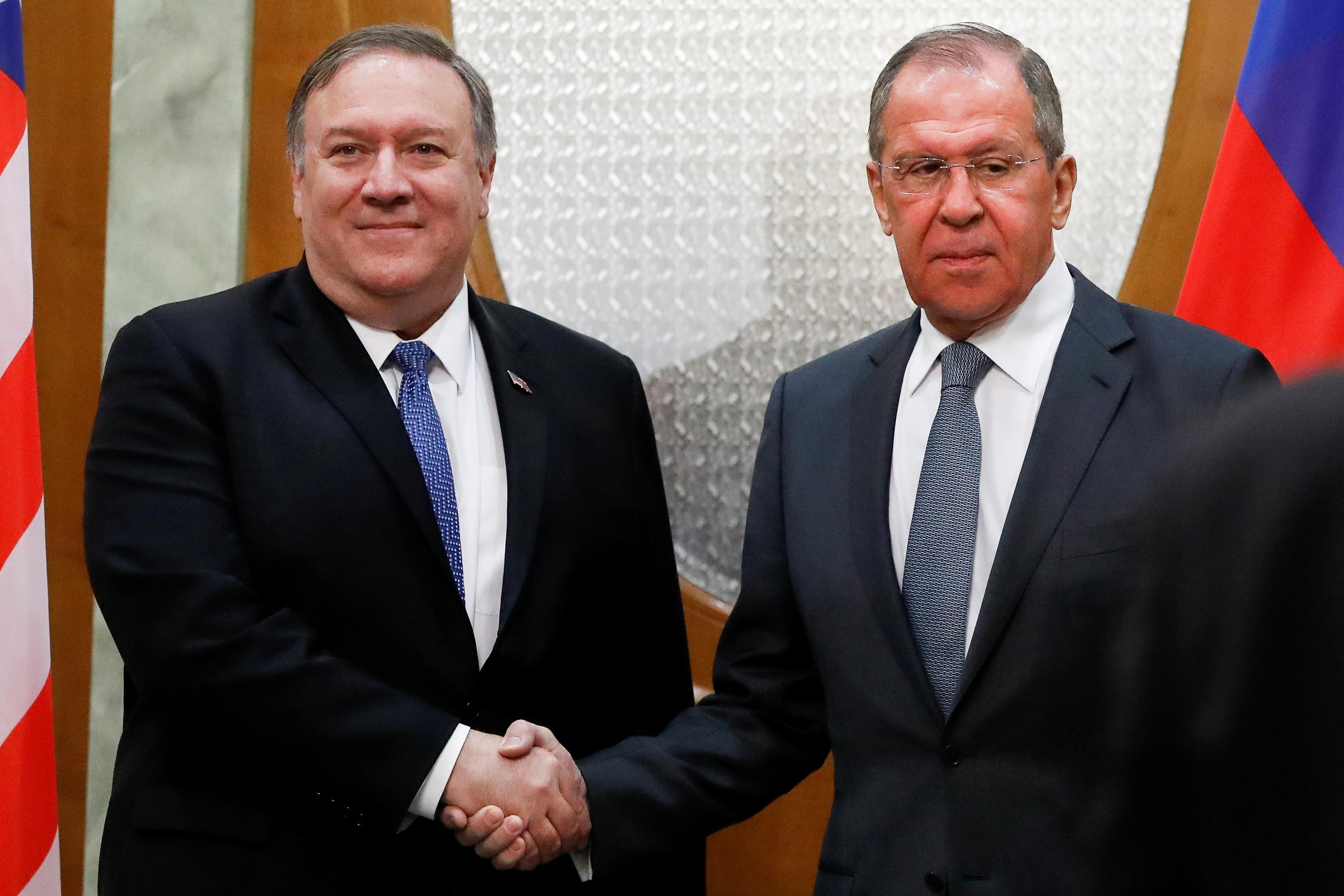 Russia should now work with Ukraine’s new president-elect to bring peace to eastern Ukraine, said Pompeo, adding that he wanted Moscow to free a group of captured Ukrainian sailors.

Pompeo said he had also complained to Lavrov about U.S. citizens being detained in Russia, a reference to the case of Paul Whelan, a former Marine accused of espionage, and Michael Calvey, an investor accused of fraud. Both men deny wrongdoing.

Lavrov told reporters the two countries continued to disagree about Iran’s nuclear program and the international community’s approach to Tehran, while Pompeo said he had raised U.S. concerns about escalating fighting in Syria’s Idlib.