The Philippines’ ambassador to the UK has called for health workers to be ‘properly protected’ after it was claimed Filipinos accounted for the highest death rate of staff across the NHS and care services.

As of May 16, 173 frontline health and care workers with Covid-19 have died, reports the PA news agency. 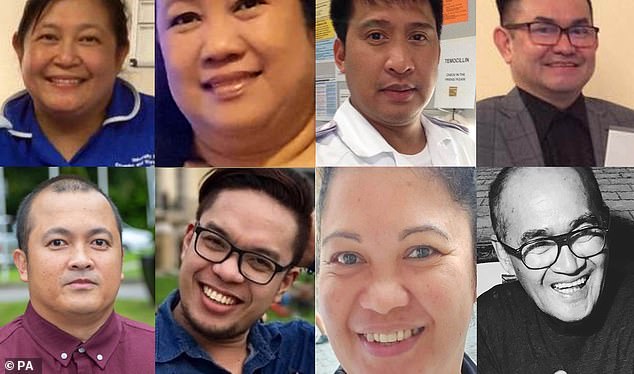 There are calls for better protection of Filipino workers after it was claimed they account for the highest death rate of staff across the NHS and care services. Among those who have died, are top row: Leilani Dayrit, Linnette Cruz, Ruben Munoz, Larni Zuniga; and bottom row: Julius Sana, Kenneth Lambatan, Elma Cavalida and Eleuterio Gibela

Among those were two who died this week — Norman Austria, a healthcare assistant at the University Hospitals of Derby and Burton, and Jun Terre, a nurse at Stoke Mandeville Hospital in Buckinghamshire.

Ambassador Antonio Lagdameo said: ‘I urge the NHS to ensure that those heroes who put their lives on the line for all of us are properly protected and equipped as they do their job.’ 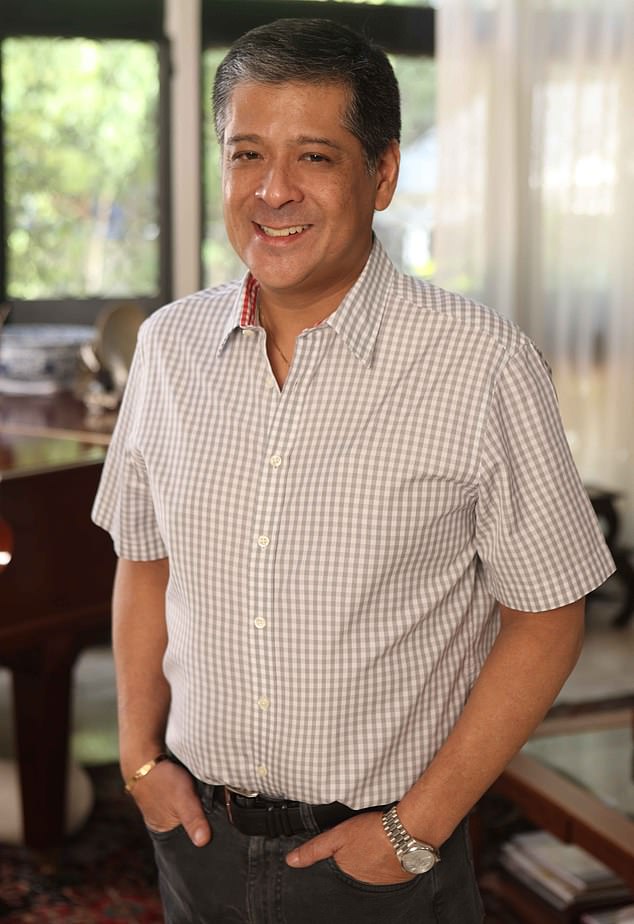 His call for action comes in the wake of recent statistics that show black and other ethnic minority (BAME) staff were found to be up to four times as likely to die from the virus.

Figures from the Office for National Statistics (ONS) showed that the risk of dying was 4.2 times higher for black men and 4.3 times for black women compared with white people of a similar age. 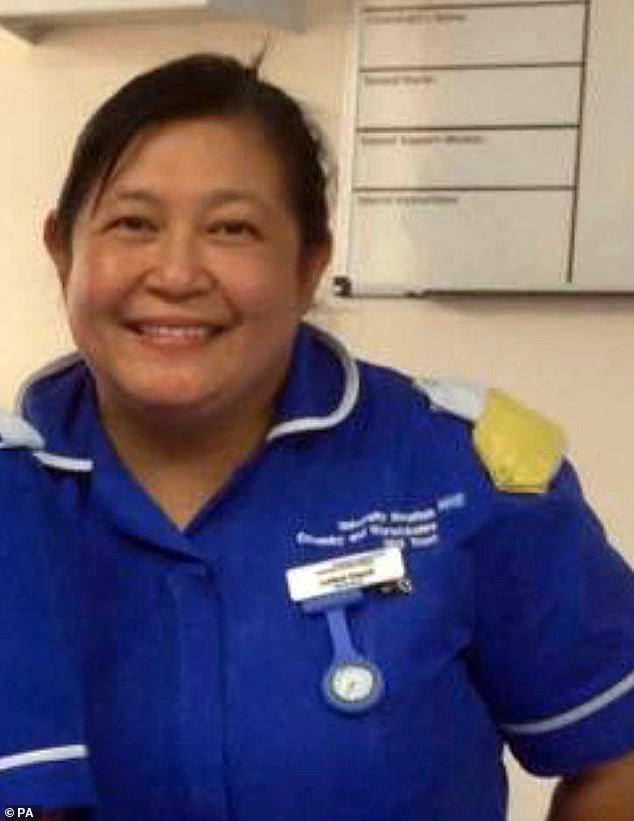 The risk was 2.7 times higher for Indian men and 2.4 times for Indian women, although statisticians said the figures for all groups were partly due to ‘socio-economic’ deprivation.

Francis Fernando, a nurse and officer for the Filipino Nurses Association UK, said he believes more of his compatriots have died working in the UK health and care system during the crisis than in the Phillippines.

While a lack of reliable data makes it difficult to prove definitively, Mr Fernando believes the community has suffered more deaths in Britain’s health and care sector than any other ethnic group. 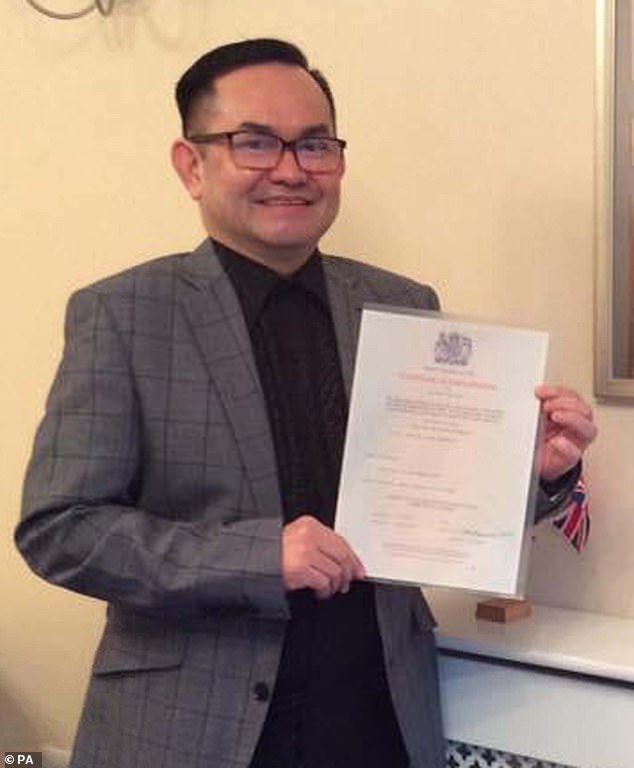 Official figures indicate that around 18,500 Filipinos worked in the NHS in England as of March 2019, roughly 1.5% of an estimated 1.2 million total workforce.

The vast majority of those workers were in nursing or clinical support positions, with the Philippines providing more staff in these roles than any other country outside the UK.

‘There must be something in our culture that prevents us from speaking out or we feel that we just have to follow the manager’s requests, that we cannot say no,’ Mr Fernando told PA.

‘That’s true to the new Filipinos who have arrived here in the UK. Twenty years ago I was like them,’ he said, adding that he knew nothing about union representatives or how to effectively raise concerns with management when he first joined the health service.

Mr Fernando, who worked for 19 years in the NHS before moving to a private care home in London, added that the Filipino Nurses Association had heard ‘a lot of anecdotal stories about BAME staff being hand-picked to work in Covid wards, again without adequate protection’.

‘Few of the BAME staff will say no. It’s our job, we have a duty of care to our patients as nurses and professionals. So, unfortunately, they are being put in harm’s way,’ he said.

Eleuterio — or ‘Boy’ — Gibela, 68, had worked at Blackpool Victoria Hospital as a cleaner since 2003, following his wife Deborah, who had already moved from the Philippines to work there.

He died in the same hospital on March 2 after contracting Covid-19.

Mr Gibela had continued going in despite suffering diabetes and chest problems, both of which would put him at greater risk if he caught the virus. 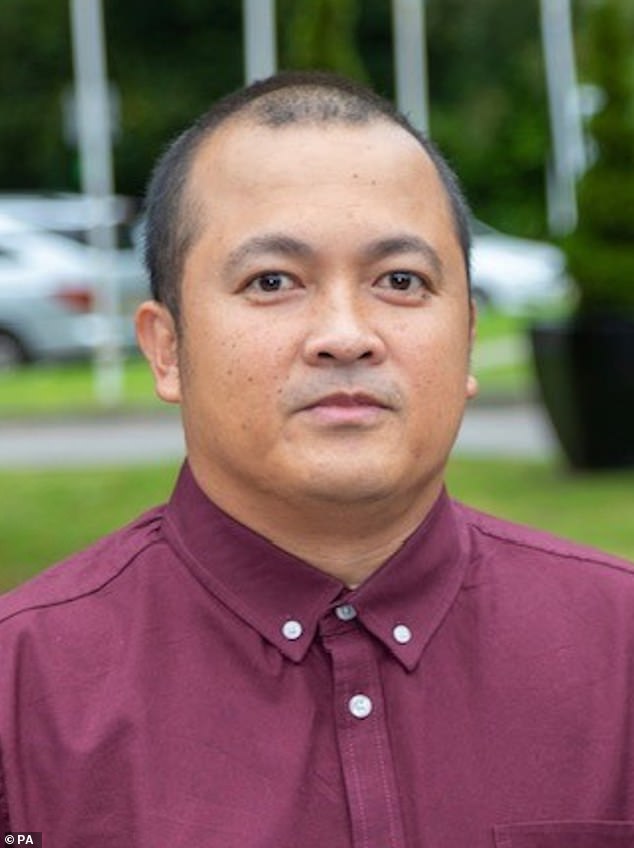 Julius Sana, 40, fell ill with Covid-19 while working at a hospital in Newport, South Wales

Mr Gibela’s youngest daughter Kristiana told PA: ‘My dad would never complain about anything. I know he was a really hard-working man.

‘They would ask him to do overtime and cover for someone; my dad would never say no. He was that kind of man.’

Her elder sister Louella said she believes he contracted the virus on his last shift, during which his ward was treating ‘a lot of Covid patients’.

She said her mother had tried to make arrangements for him to be transferred or sent home, but ‘he was a very stubborn man’ and wanted to finish his day of work.

Louella also echoed the ambassador’s calls for more to be done to protect workers, adding that the Government ‘could have found better PPE’ for staff.

There have been calls for a public inquiry into the number of deaths among black and minority ethnic (BAME) workers from Covid-19, after official statistics showed people from some minority backgrounds were at greater risk of dying after contracting the virus. 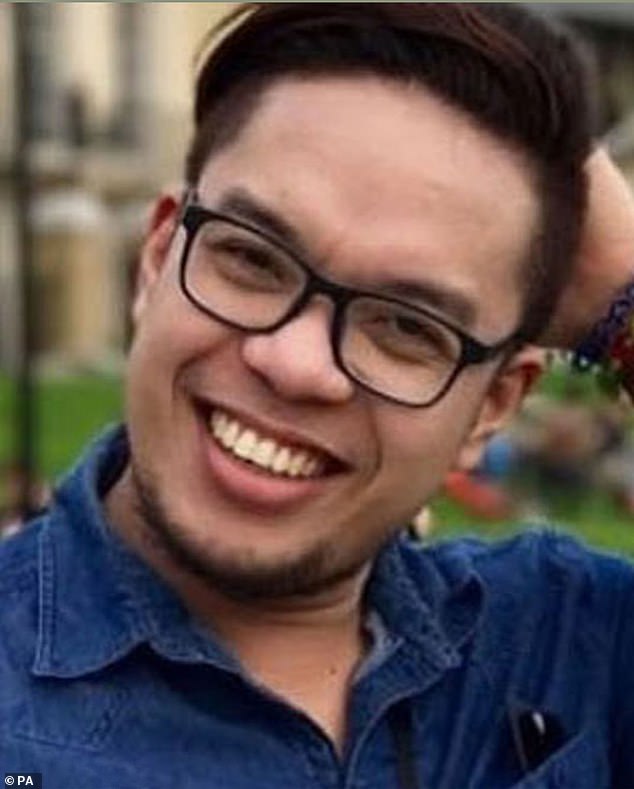 The NHS has introduced risk assessments for all BAME staff in the wake of the concerns, and is working with organisations such as Mr Fernando’s to allay fears among staff.

However, he still believes that many are not putting official guidance in to effect, with the group informed of several cases of vulnerable workers being put in high-risk situations by their managers.

In one case, Mr Fernando said he had spoken with a worker in an oncology ward near Covid patients, who had been told to continue working despite being almost seven months pregnant.

He added that it was even more difficult to ensure proper practice in private care homes, citing another example of a nurse with cancer who was told she would be unpaid if she stopped working.

‘If she does end up with Covid-19 she’ll die, no questions about that,’ he said.

THE FILIPINO HEALTH AND CARE WORKERS WHO DIED OF COVID-19

Here are the verified the names of 23 Filipino workers within the UK health and care services who have died with coronavirus.

The 27-year-old nurse treated coronavirus patients at Watford General Hospital. His mother, Gina Gustilo, told the Mail on Sunday he fell ill during a 12-hour shift, but did not leave work early. He died on April 3.

Ms Bucu, based at Heatherwood Hospital in Ascot, died on April 3. A statement from Frimley Health NHS Foundation Trust said her colleagues described her as a ‘ray of sunshine’.

The 51-year-old, who worked at Hammersmith Hospital in west London, died on April 7 after going into self-isolation with coronavirus symptoms.

Described as a ‘ray of sunshine’, Ms Dayrit, a Filipino nurse who worked at St Cross Hospital in Rugby, died on April 7.

The nurse is reported to have died on the morning of April 10, having worked at St Charles Hospital, west London.

Oscar King Jr, a Filipino porter at the John Radcliffe Hospital in Oxford, died on April 11, aged 45. He was said to have worked for the hospital for more than a decade, ‘always doing his job with great enthusiasm and joy’.

A colleague of Oscar King Jr at John Radcliffe, Mr Rico worked as a porter there since moving to the UK from the Philippines in 2004 ‘and loved the work that he did’, according to a fundraising page published by his family.

The ‘dedicated and very caring’ Filipino nurse, 60, died at St Mary’s Hospital in Paddington, London, on April 12, just two days after being admitted.

Mrs Medel, who worked as an agency nurse in South Wales, was described as a ‘wonderful and caring person’.

Her employer, Cardiff-based Hoop Recruitment, said: ‘The nursing profession has lost a warm-natured and beautiful nurse who cared for so many vulnerable people during her nursing career.’

The 51-year-old senior head nurse at the Brynteg dental practice in Sketty died on April 14 having been admitted with Covid-19 in March, according to NHS Wales.

Brynteg practice owner Nik Patel said: ‘She brought love, light and joy to everyone around her and will be sadly missed by all.’ 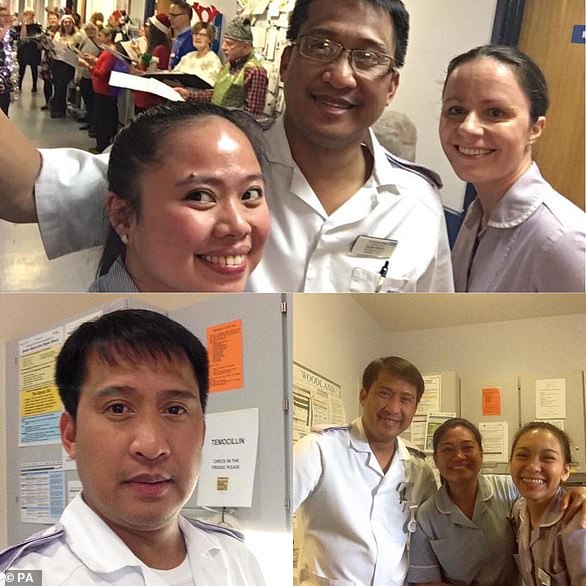 Ruben Munoz, a father-of-two and nursing assistant at Surrey and Sussex NHS Trust for a decade, died on April 17.

Ms Carter worked on the admissions ward at Morriston Hospital and was well-loved by all her colleagues and patients, Swansea Bay University Health Board said.

Nurse and mother of three, Ms Banaag had worked at Watford General Hospital for almost two decades, since she arrived in the UK in January 2001.

A fundraiser, set up in her memory, said she was ‘so hard-working up to her last working days’ when she contracted the virus.

A self-employed nurse in Nottingham, Ms Hurboda ‘made sacrifices to work abroad and moved to the UK to provide a better life and education for her family’.

Mr Zuniga, who received his British citizenship in February, died on April 24 aged 54, at St Thomas’ Hospital in central London.

After arriving in the UK 12 years ago in a bid to make a better life for his family, according to a friend, he worked in the Surrey Hills care home in Godalming.

The ‘bubbly’ and ‘friendly’ maternity assistant worked at Northwick Park Hospital, north-west London, and died on April 26 after contracting Covid-19.

She arrived in England 10 years ago from the Philippines, according to a GoFundMe page set up by her husband.

Mr Sana, 40, fell ill with Covid-19 while working at a private hospital which cares for people with neurodegenerative diseases in Newport, South Wales. He died on April 26.

Mr Lambatan was just 33 years old when he died on April 27 after contracting Covid-19 and was ‘an extraordinary person, son, brother, nurse, colleague and friend’, according to a GoFundMe page posted in his memory.

St George’s Hospital, London, where he worked, said he was ‘described as a ‘true gem’ by those that knew him well’. 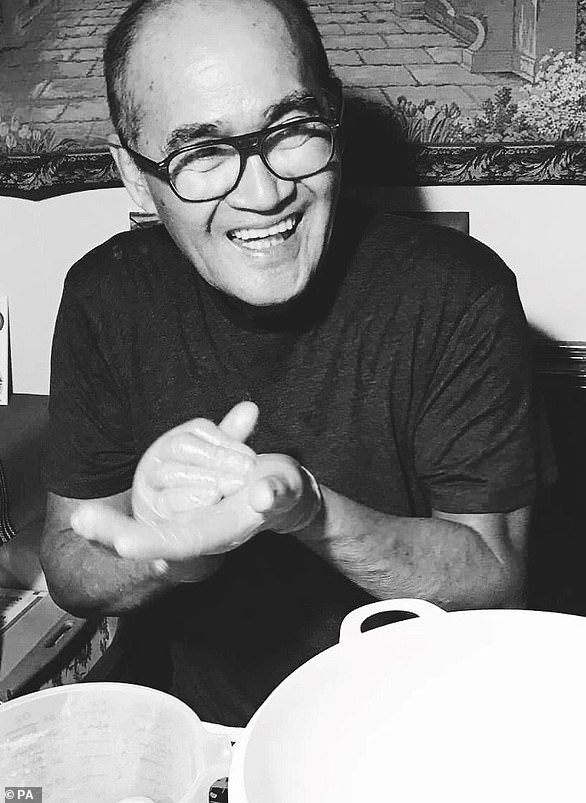 Eleuterio Gibela, 68, was known by his colleagues at Blackpool Hospital as Boy

The father-of-two, known by colleagues as Boy, died on Saturday May 2 after testing positive for the virus.

The 68-year-old and ‘true gentleman’ had worked in domestic services at Blackpool Teaching Hospital NHS Trust for nearly 20 years.

Ms Sablayan was described as a ‘much-loved specialist’ who trained in the Philippines before joining University College London Hospital in 2002. A GoFundMe, set up in her memory, said she died on May 5. 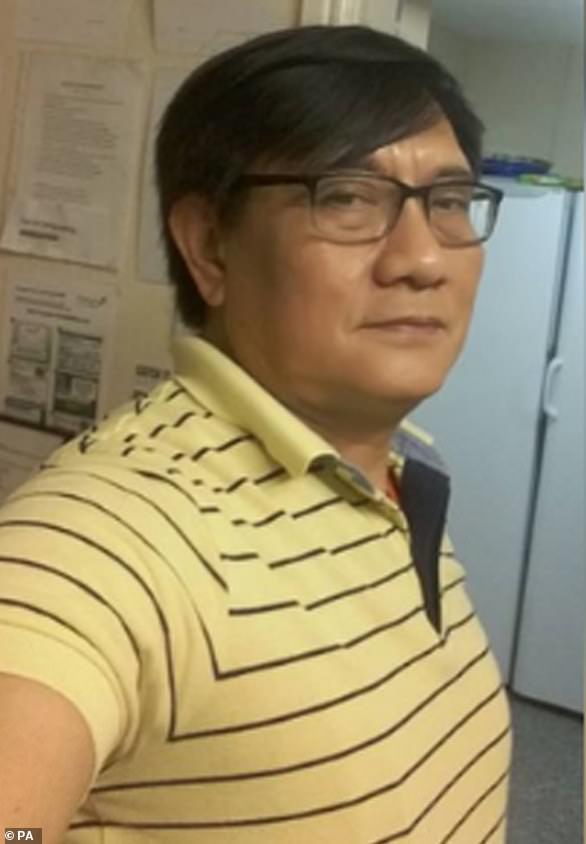 The 61-year-old healthcare assistant from the Philippines was described as a ‘highly valued’ member of his ward.

The University Hospitals of Derby and Burton said he regularly sang the song, You Are My Sunshine, to calm and reassure vulnerable patients.

Mr Austria’s widow Shirley said: ‘Norman was a very lovable, caring and responsible person. We were married for 40 years and he was a wonderful husband. He was very proud of his family and loved his children and grandchildren very much.’

Lalaine Lopez Pesario was a care worker who died on May 3 with Covid-19.

‘Lalaine was a kind, caring person and also a dedicated nurse. Her sudden loss brought a huge sad impact to our home and the rest of the community. She was compassionate and treated everyone with extra care and love. She brought light to our home as she loved to dance and sing,’ Yolanda Jones, director of Mumbles Nursing Home, said, according to ITV.

Jun Terre, 52, died on May 14 and was said to be ‘a gracious, quiet and kind gentleman with a smile that would light up a room’, according to Neil Macdonald, Buckinghamshire Healthcare NHS Trust chief executive.