As staff at the Royal Melbourne Hospital prepared for the coming pandemic in March, the hospital's head of music therapy, Emma O'Brien, identified a gap in workplace morale and thought music could help.

"It's a privilege to work here but it's also very stressful.

"Someone mentioned that pub choir had become couch choir, and they said 'could we do something like that?'. I said, 'what a great idea!'."

At that moment, when nurses and doctors were more focussed on PPE guidelines than basslines, the hospital's unofficial "scrub choir" was born.

In the early months of the pandemic, the group gained immediate popularity among staff and wrote a song about getting prepared for the pandemic called "Surreal" to encapsulate the movie-like reality. 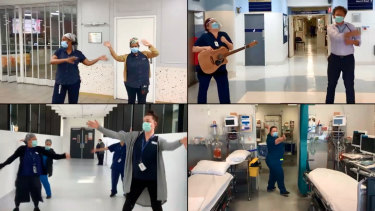 In the middle months of the pandemic, the choir wrote a song about the experience of living through it.

Their third original track, called "Gratitude", is in the works and will focus on the things staff are thankful for that have helped them cope with the strict lockdown.

The video clips associated with the tracks help illustrate the radical changes to our daily lives as 2020 has progressed, said Dr O'Brien.

"It was a completely different feeling back then before the world changed … There were no masks and we were in much bigger groups," she said.

For its most recent physically-distanced singalong, the group overwhelmingly voted to sing 1994 ballad "I'll Stand by You" by English-American band The Pretenders.

More than 380 staff joined in to record their rendition of the song, which was then sent to Dr O'Brien and collated into one version of the tune.

Some of the filming occurred in the hospital – including through the window of the COVID-19 ward – while some staff recorded their snippet from home.

"The singing is an emotional thing," Dr O'Brien said, adding that music therapy is being used with COVID patients in the hopsital.

"Some of them sung with a soundtrack behind them sent in from their homes … There were lots of arms going up and down and some foot-stomping.

"It was really that three of four minutes of joy that sustained people, people craved it.

“We're celebrating the power of music and how people coped during this time."