PAUL Gascoigne wept in court today as he described his "automatic instinct to protect fat" people.

The ex-England ace, 52, told a cop he was "just trying to help a fat lass" after kissing a woman on the lips on a train between York and Durham, a court heard. 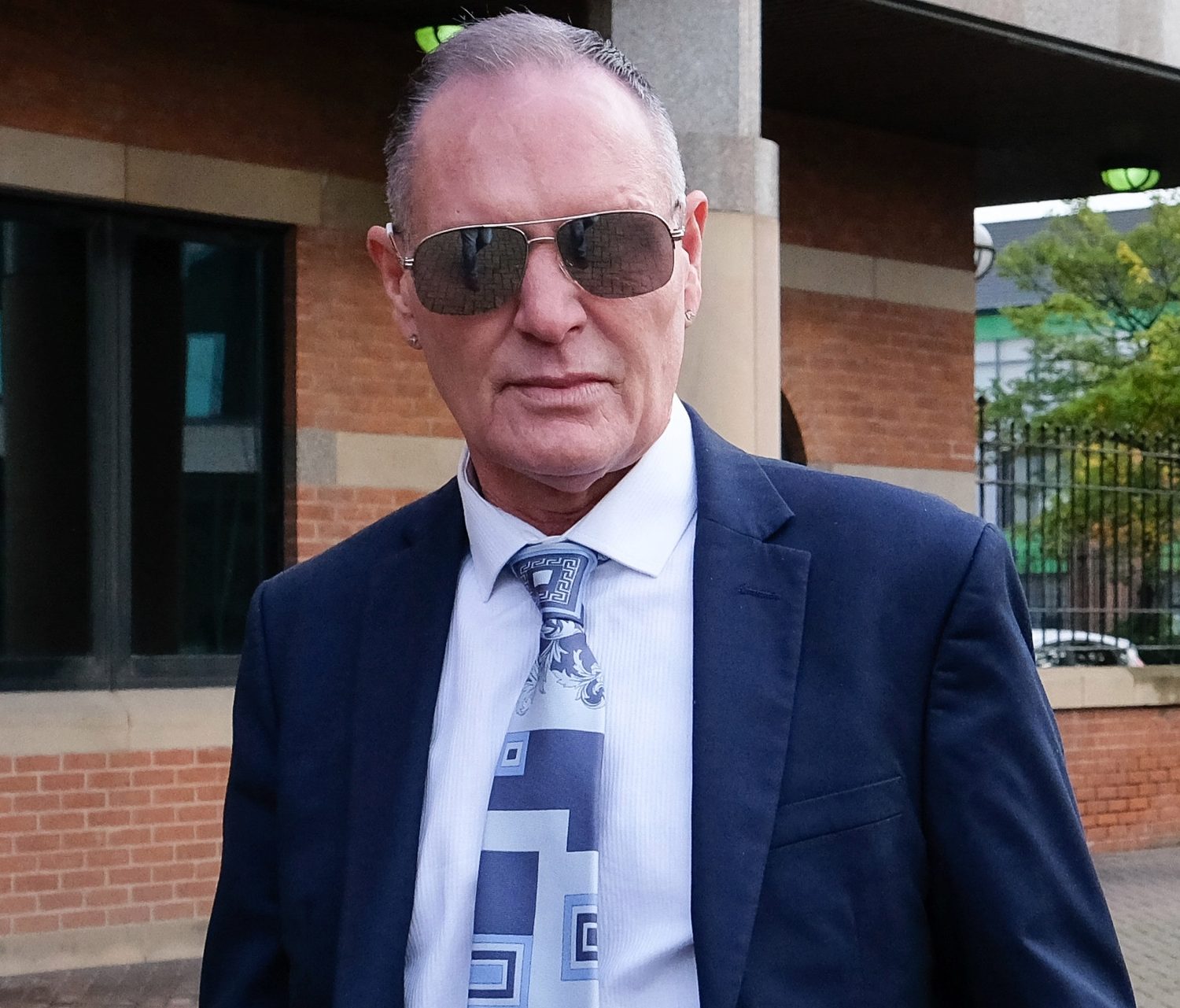 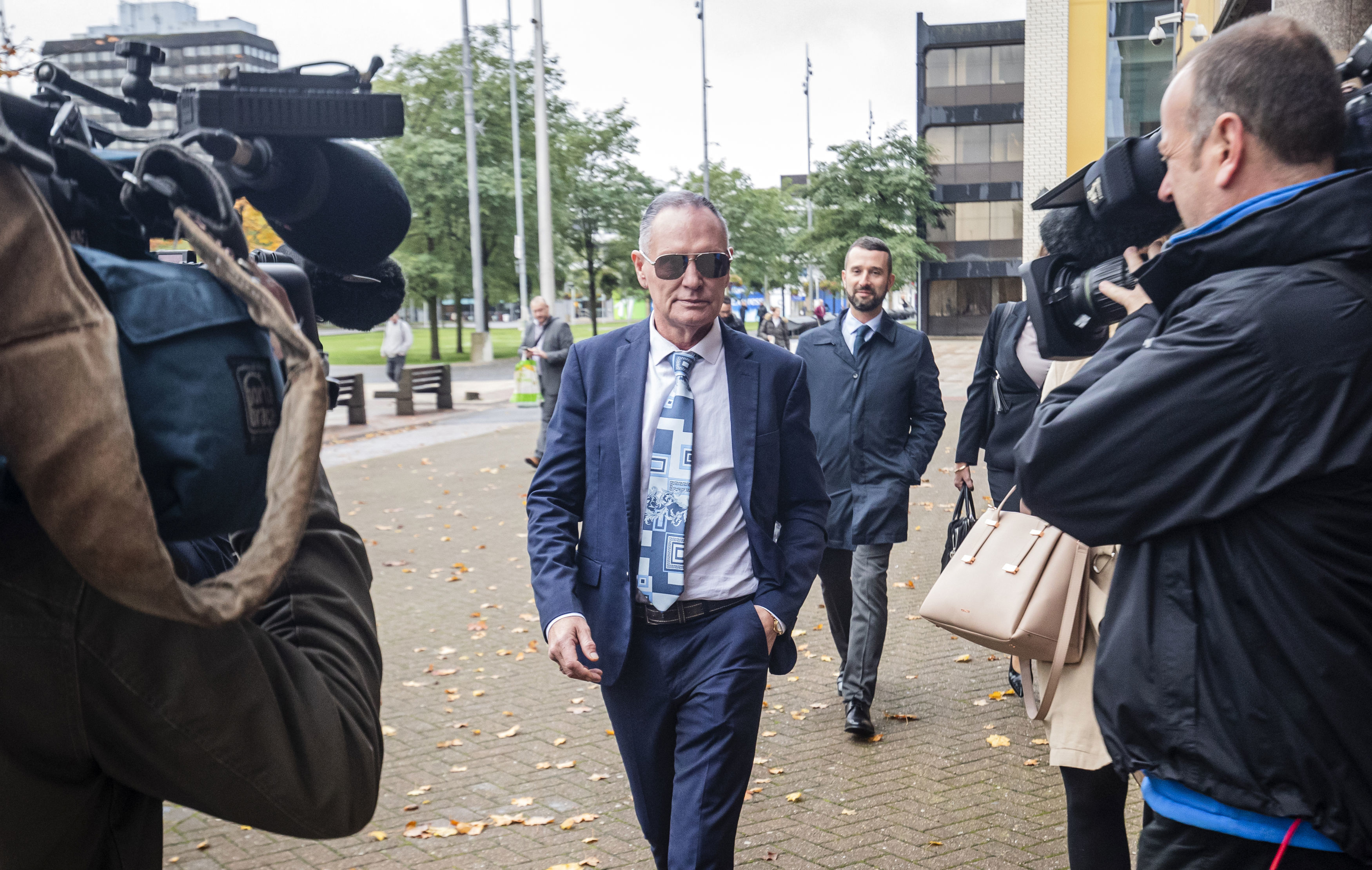 Gascoigne is accused of sexual assault after "forcibly and sloppily" kissing the woman and sticking his tongue in her mouth.

The former Tottenham midfielder momentarily broke down in tears took to the witness stand at Teesside Crown Court to deny the kiss was sexual.

He said: “I get kissed all the time. If that’s the case I’ve been sexually harassed for the last 20 years.”

Jurors were shown a video of Gascoigne kissing Princess Diana, Wayne Rooney and a host of other celebrities.

The Geordie said he has an instinct to "automatically protect" those who are called fat after he was branded "fat b******" and battled bulimia in his playing days.

Gascoigne been "shouting and swearing" behind the woman and had asked if she was a fortune teller on August 20 last year, Teesside Crown Court heard.

He told the jury he stuck up for the woman after cruel passengers branded her "fat and ugly".

He says he went to sit next to her and said "Listen, you're not fat and ugly" then kissed her on the lips.

The former midfielder said that the kiss itself was "just a little peck", that no tongue had been involved.

Gascoigne had a beer in his hand when he was arrested at a hotel and told a cop: "I know what it's about, I kissed a fat lass."

I felt sorry for her. I made sure – she was not fat and ugly

Jurors were told that Gascoigne had said to officers that he had only had "three or four cans" prior to the incident because spirits made him "spew up" following a recent operation.

He said during the interview: "Before the operation I could drink gin no problem."

In court on Monday, prosecutor William Mousley QC said Gazza, who played for Newcastle, Spurs, Everton and Lazio, was "drunk".

The jury was told that while being quizzed by cops he said he had given the woman a "peck on the lips to reassure her".

When the footballer was confronted by other passengers, he told them he had tried to give her a "confidence boost", the court heard.

Describing the alleged offence as a "blatant act", Mr Mousley said it was "humiliating" for the woman involved, adding: "Perhaps it was him showing off."

Giving evidence today, the woman told jurors she noticed the former footballer being "very noisy" on the train, saying: "There were lots of cans on the floor."

'HE GRABBED MY FACE AND KISSED ME'

She explained she had put headphones on to block out the noise from "intoxicated" Gascoigne but he engaged her in a conversation by asking if she was a palm reader.

The woman said: "I turned around to face him and he grabbed my face and kissed me full on the lips, and I was taken aback because it was just completely out of the blue."

She told jurors she did not know that the man who kissed her on the train was the former footballer until after the incident.

The woman also denied someone had asked him: "Why would you want a photo with that fat cow?"

Gascoigne's barrister Michelle Heeley QC asked if had come over to comfort her and said "do not worry, you're very beautiful", before moving to kiss her.

The woman responded: "I do not recall that happening."

Gascoigne is on trial at Teesside Crown Court after denying one count of sexual assault by touching in December last year.

The footballer was pictured arriving at court yesterday wearing sunglasses and a blue suit with a matching blue and white tie.

Jurors were asked to put any views they have of him to one side and had to state if they were ever employed by any of his previous clubs.

Midfielder Gascoigne earned 57 caps for England during his international career and was branded one of the greatest players of his generation.

He famously broke down in tears at the 1990 World Cup after receiving a yellow card in the semi-final with West Germany – meaning he would not play if England reached the final.

During his career, Gazza enjoyed successful stints at Tottenham, where he helped the team win the FA Cup in 1991, Lazio, Rangers and Middlesbrough.

The ace also played for Everton and later had spells at Burnley and Boston United.

But following retirement, Gazza battled alcohol problems – although has since turned his life around.

The trial is expected to last five days. 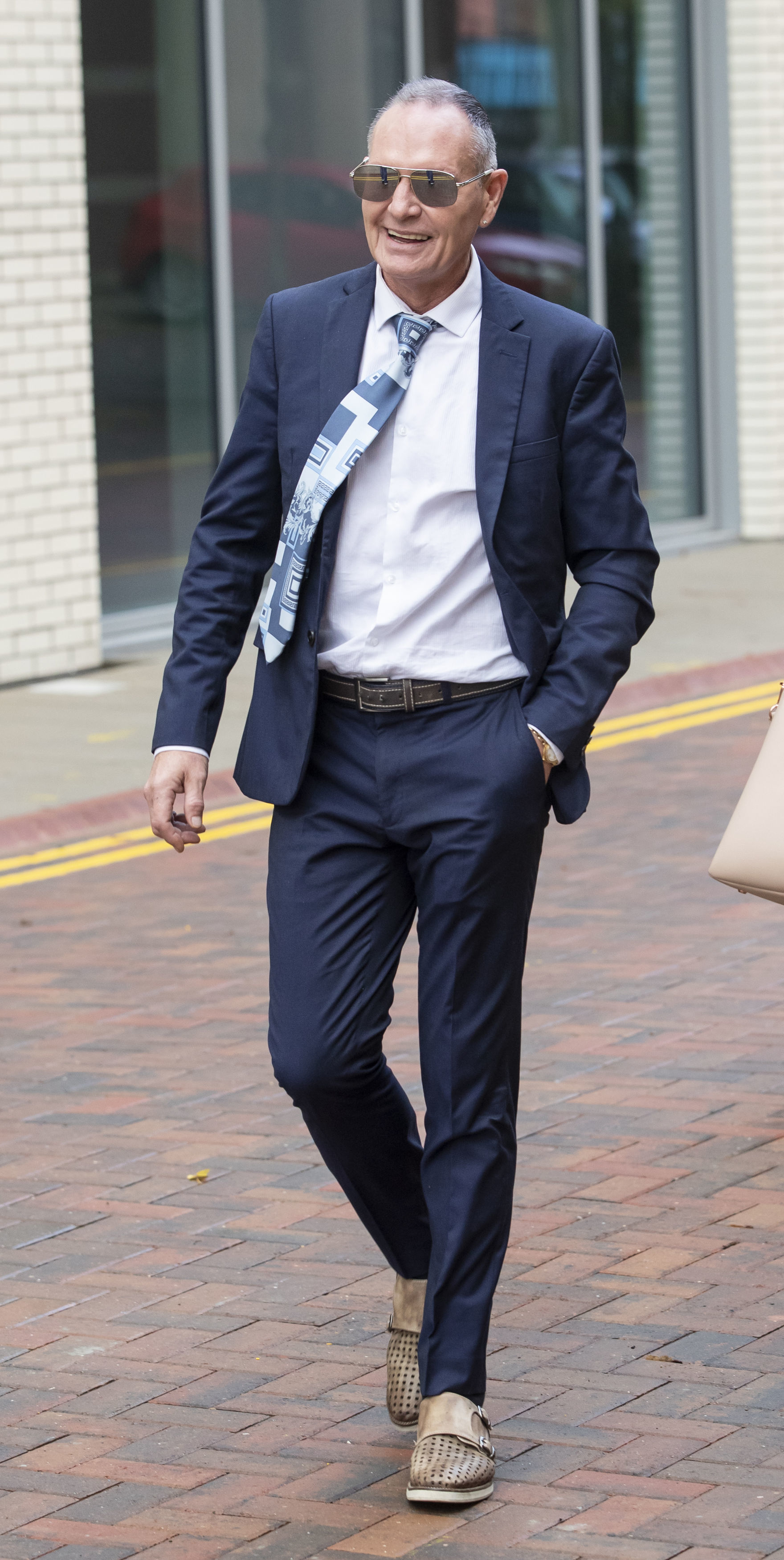 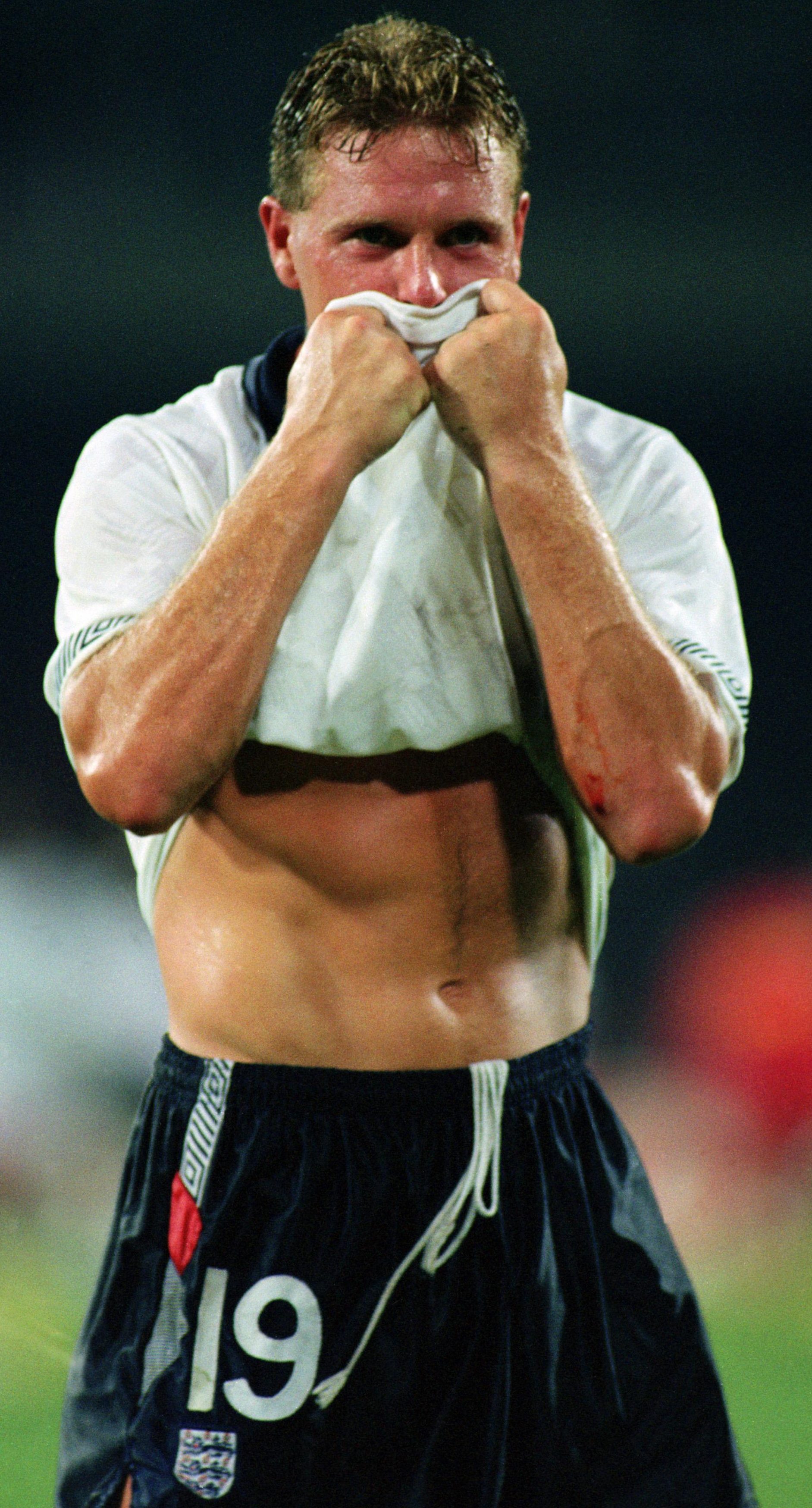 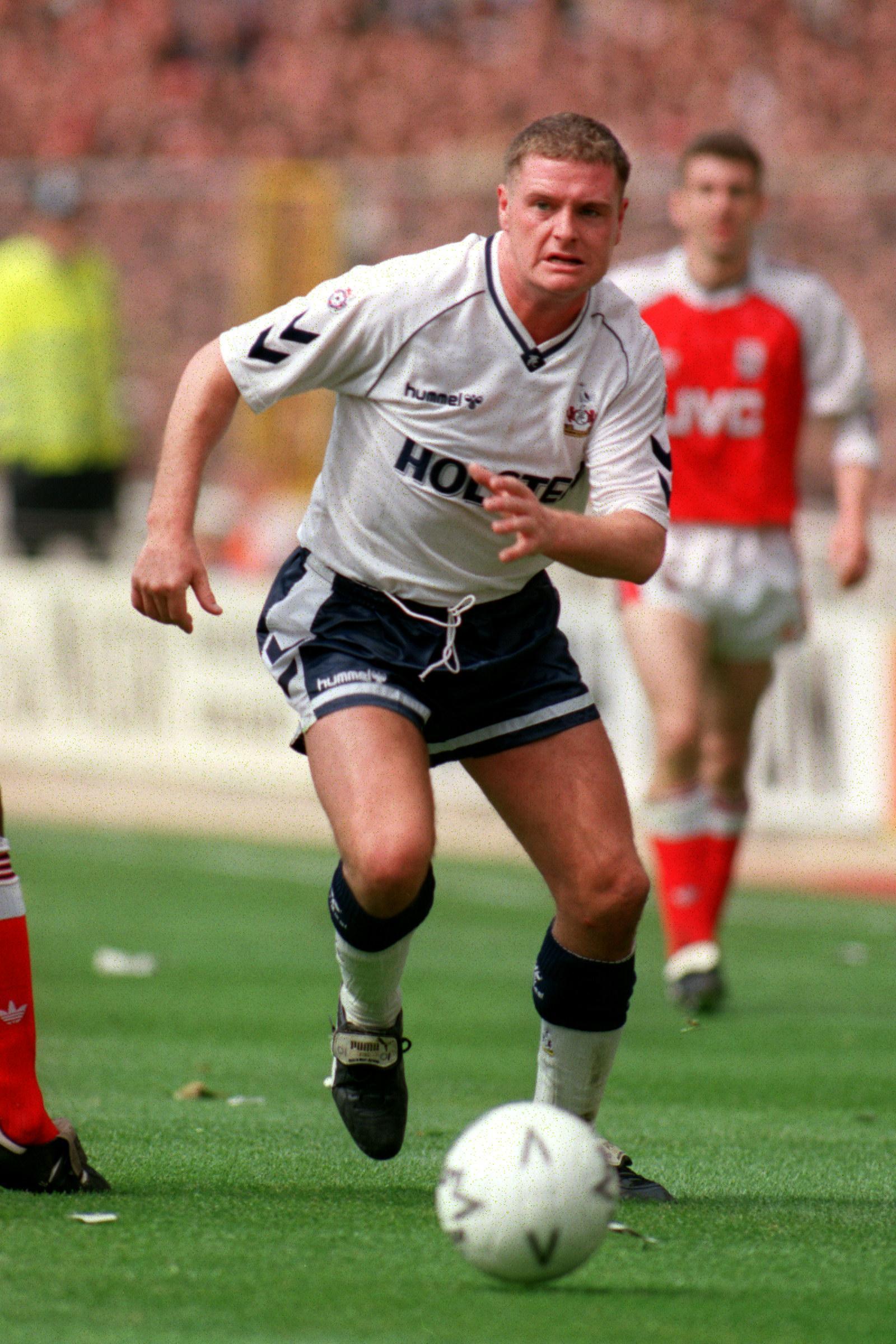