Party animals go all out in Washington Square park: Dancing, drinking, and fireworks 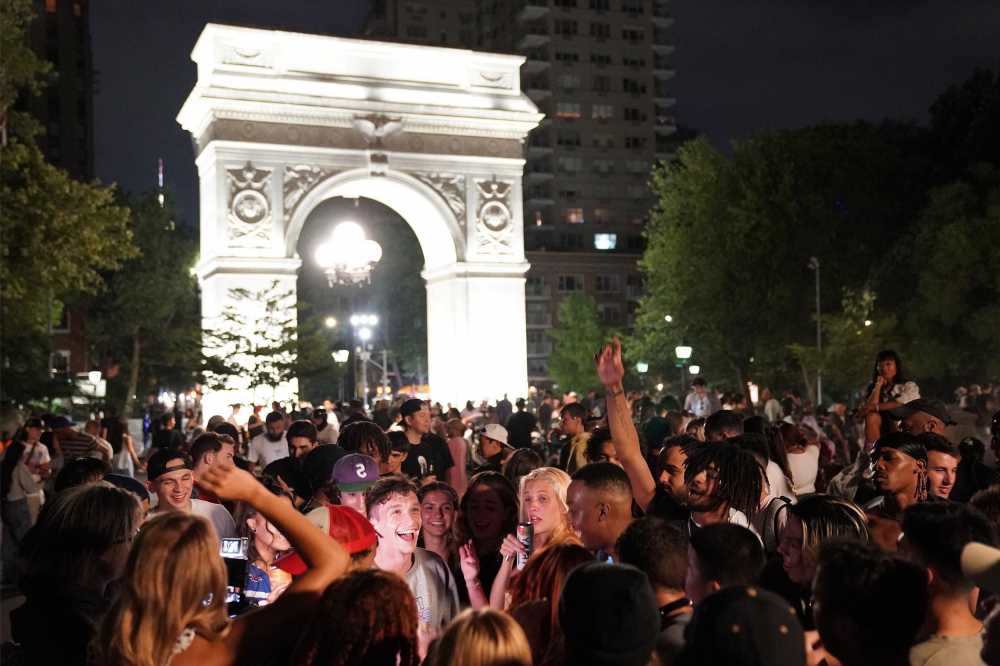 Dozens of cops looked on while three separate dance parties broke out at the Greenwich Village greenspace late Saturday night and continuing into Sunday.

The park partiers sipped on Michelob, White Claw, Heineken, as well as nutcrackers and margaritas — which were being sold for $20 — near the park’s famed fountain.

“If you look around, people are doing their own thing. That’s all that matters to me,” he added. “Here, everyone is living it up.”

Ten minutes before the midnight closing time, fireworks were set off in the park — prompting wild cheers from the crowd.

At around 12:30 a.m., about 100 revelers danced around the fountain to Armin Van Buuren’s “This is What it Feels Like,” while a half-hour later, a smaller group busted moves to “Cotton-Eyed Joe.”

Cops on Sunday morning said no arrests were made overnight.

Alex Yoshizuka, a Baruch College student, told The Post it was nice to see people partying and letting loose after the COVID-19 pandemic kept people cooped up.

“It’s great because there’s a lot of pent-up energy and emotions since the pandemic,” said Yoshizuka, 21, with a mango-flavored White Claw in his hand. “And it’s nice that everyone is going off.”

But the Gramercy resident said he has sympathy for neighborhood residents, who have expressed frustration about loud partying, open drug use and other mayhem in the park.

“I feel so bad for them,” Yoshizuka said with a laugh. “It wasn’t like this one [or] two years ago.”

But those complaints have done nothing to stop revelers from dominating the famous 10-acre park weekend after weekend — with some nights devolving into violence — as the weather has heated up.

Just before 2 a.m. Sunday, a young man spray painted “chose love not hate your city” inside a blue heart on the ground, as hundreds of people remained inside the park.

Asked if the police officers planned to enforce the midnight closing time, one cop told The Post, “Not that I’m aware of.”

The carefree night came after unsanctioned boxers again threw jabs in the park on Friday, in a scene reminiscent of the 1999 movie “Fight Club.”

Boxers began slugging it out with the park as its backdrop in early June.

“The knuckleheads in the park are just gonna keep pushing the envelope until something bad happens,” fumed Andrew Levas, 62, on Saturday.

Earlier this month, fed-up Greenwich Village residents met at a public meeting to express their frustration about the recent rowdy park behavior, which included two people stabbed during a June 12 brawl.

The following Saturday, a Taser- and knife-wielding maniac caused a stampede that left a woman injured, as the weekend pandemonium continued at the park.

The city in early June implemented a 10 p.m. curfew in the park but it was lifted soon after on June 12. Chaos erupted on June 6 as NYPD officers in riot gear enforced the then-newly installed curfew.

Mayoral frontrunner and retired NYPD captain Eric Adams said in response that the city needed to put an end to the “open disorder” in parks — but that the riot gear-clad cops’ curfew enforcement was “heavy-handed.”