France is set to announce tougher lockdown measures in Paris today, including a ban on gathering of ten or more people to tackle a rise in coronavirus cases.

The sale and consumption of alcohol in public places after 8pm is also expected to be banned by city officials, who could also reduce the maximum number of people at mass gatherings from 6,000 to 1,000 people.

The new rules mark a major step backwards for the French capital, but are more relaxed than those brought in by this week by the UK – which has banned gatherings larger than six across the country, and ordered all pubs to close by 10pm. 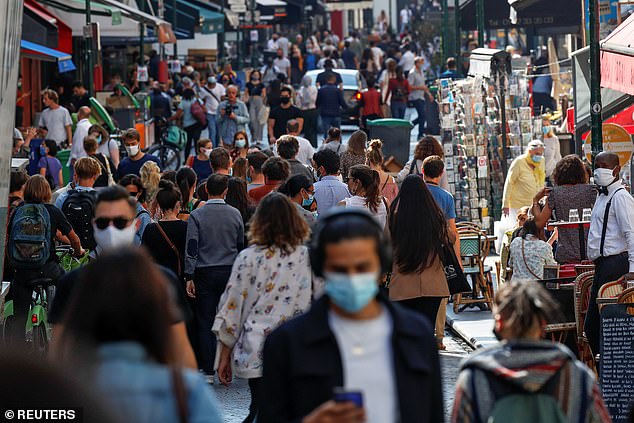 Paris is set to be hit with new lockdown measures today that will ban gatherings of more than 10 people, along with alcohol consumption in public places after 8pm 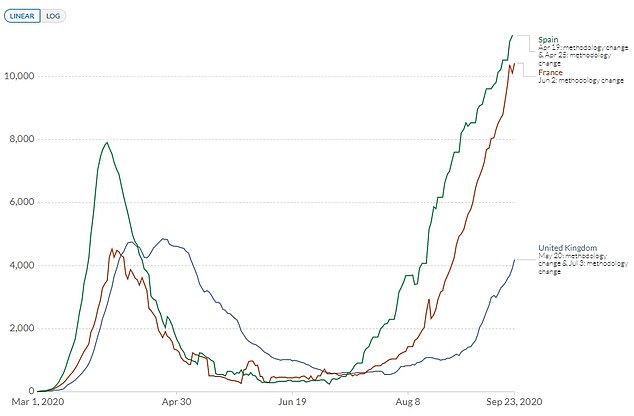 France, Spain and the UK are all seeing spiking Covid cases – but only the UK has imposed new national measures, while France and Spain have used more-relaxed local lockdowns

That is despite France having more than double the UK’s daily coronavirus cases, based on a seven-day rolling average.

France, Spain and the UK are bearing the brunt of a second wave of coronavirus cases in Europe, which comes after countries across the continent eased lockdown.

Until this week, all three countries had been dealing with problem using local lockdowns, targeted at areas where cases were rising fastest.

But on Tuesday the UK suddenly broke ranks with a raft of new nationwide measures, which Prime Minister Boris Johnson said will last for the next six months.

In addition to cutting the size of gatherings and closing pubs early, he also urged workers to return to working from home – despite an earlier drive to get people back into offices – and banned indoor team sports.

He also increased fines for rule-breakers, and made the army available to help police enforce the measures.

That is not the case in Spain or France, where both countries have resisted imposing new nation-wide measures on focused on local lockdowns. 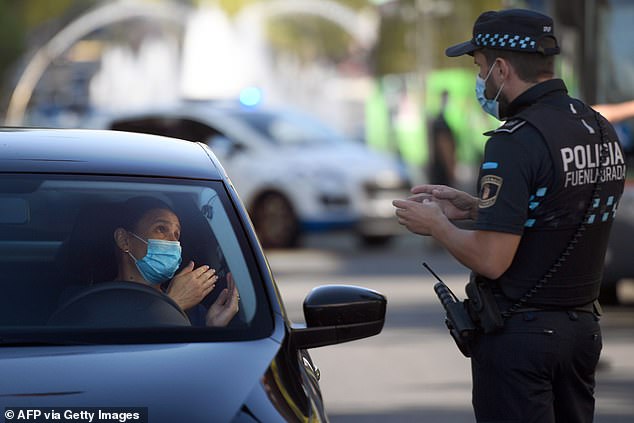 Parts of Madrid have been plunged back into full lockdown as coroanvirus cases in Spain have soared, but most of the city is still allowed to move around freely 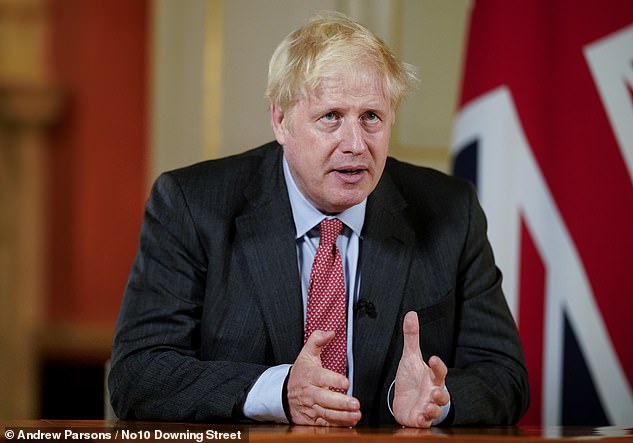 In Spain, parts of Madrid with rapidly rising infections have been thrown back into full lockdown, with authorities calling on the army to help enforce the rules.

The remaining 6.6million residents have been encouraged to say indoors, though are not required to do so – yet. New measures are due to be announced next week.

Meanwhile Catalonia, where Barcelona is located, has also announced bans on gatherings larger than six people.

Spain saw 11,300 new cases of coroanvirus on Tuesday this week, based on a rolling seven-day average.

In France, the cities of Lyon, Marseille, Bordeaux, and Nice have all already been hit with tougher new lockdown measures, though country-wide restrictions have remained the same.

Measures include no drinking in public places after 8pm, all bars to close by midnight, and the size of gatherings cut.

Masks are already compulsory across France in all indoor spaces, though many cities have made them compulsory outdoors as well.

France reported 10,155 new coronavirus cases on Tuesday, based on a seven-day rolling average. The figure for the UK was 3,928.