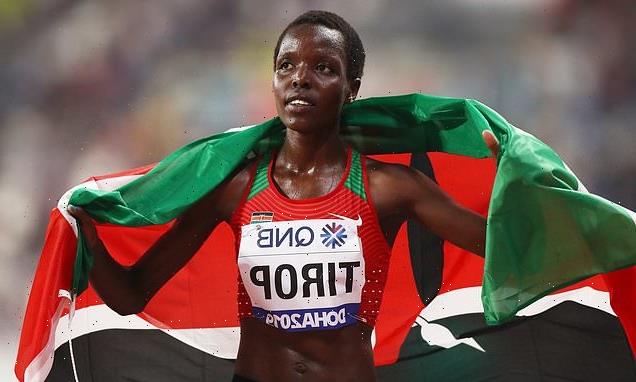 An Olympic athlete and World medallist, who finished fourth in the 5,000m race in Tokyo, has been found stabbed to death at her home in Kenya.

Agnes Tirop, 25, was discovered with stab wounds to her abdomen at her house in Iten, Elgeyo Marakwet County on Wednesday, according to local reports.

A crime scene remains in place at her house as police investigate the circumstances surrounding her death.

The promising long-distance athlete represented Kenya at the Tokyo Olympics this summer in the 5,000m, narrowly missing out on bronze medal as she finished in fourth place in a season’s best time of 14:39.62. 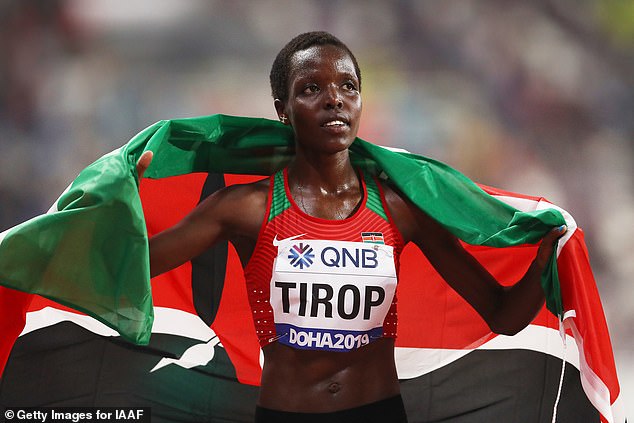 Kenyan Olympic athlete Agnes Tirop, 25, was found dead with stab wounds to her abdomen at her house in Iten, Elgeyo Marakwet County on Wednesday (pictured in 2019)

And just last month, she set a new world record in the women-only 10km race at the Road To Records event in Germany on September 12, crossing the line in 30:01, beating the previous time by 28 seconds.

After the race she said: ‘I am so happy to break the world record. The pace was tough but I felt my body was responding well.’

In the Tokyo Olympics this summer, Tirop advanced to the final of the women’s 5,000m where she finished in fourth place.

Dutch athlete Sifan Hassan won the gold medal, with Hellen Obiri from Kenya coming in second place and Ethiopia’s Gudaf Tsegay crossing the line in third place in a time of 14:38.87 – less than a second off Tirop.

The star athlete also won bronze medals at the 2017 and 2019 World Championships in the 10,000m, and won gold the 2015 World Cross Country Championships when she was just 19-years-old. 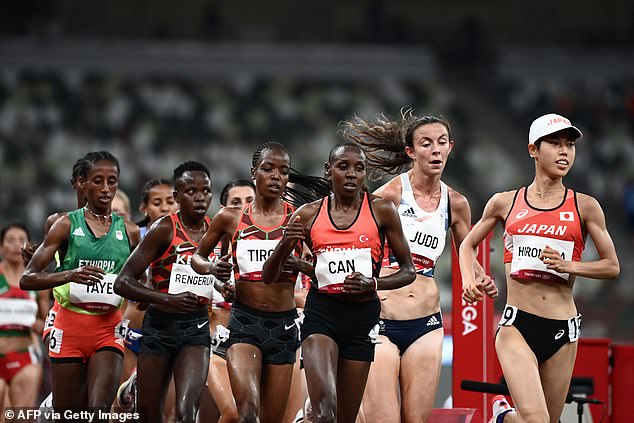 The promising long-distance athlete represented Kenya at the Tokyo Olympics this summer in the 5,000m, finishing in fourth place (pictured, centre, during the Olympic heats)

Her tragic death was confirmed by Barnaba Korir, the chairperson of Athletics Kenya in Nairobi Region.

In a heartfelt statement on social media, he wrote: ‘Athletics Kenya are this afternoon distraught to learn about the untimely death of World 10,000m bronze medalist Agnes Tirop.

‘Tirop was found dead at their home in Iten after she was allegedly stabbed by her husband. We are still working to unearth more details surrounding her demise.

‘Kenya has lost a jewel who was one of the fastest-rising athletics giants on the international stage, thanks to her eye-catching performances on the track. 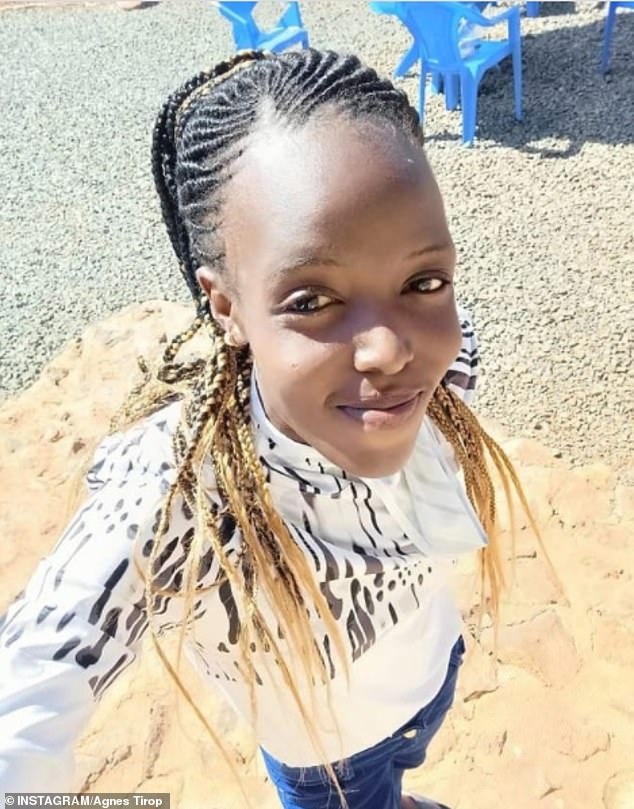 Last month, Agnes set a new world record of 30:01 in the women-only 10km race at an event in Germany, beating the previous time by 28 seconds (pictured in 2020) 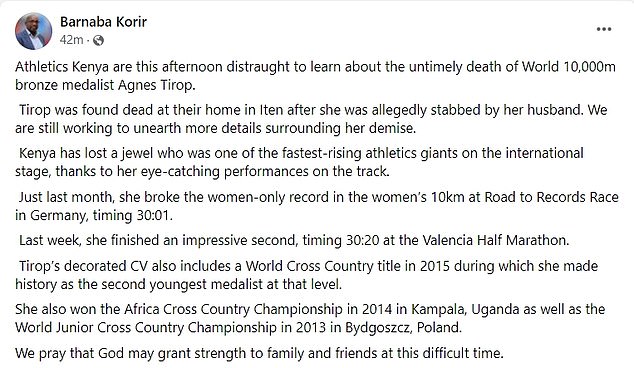 Her tragic death was confirmed by Barnaba Korir, the chairperson of Athletics Kenya in Nairobi Region, in a heartfelt statement on social media

‘Just last month, she broke the women-only record in the women’s 10km at Road to Records Race in Germany, timing 30:01.

‘Last week, she finished an impressive second, timing 30:20 at the Valencia Half Marathon.

‘Tirop’s decorated CV also includes a World Cross Country title in 2015 during which she made history as the second youngest medalist at that level.

‘We pray that God may grant strength to family and friends at this difficult time.’