NSW Health Minister Brad Hazzard said he was "a little confused" by Victoria's reaction to the New Zealand arrivals, as it was revealed 65 Kiwis have now flown to Melbourne in a consequence of the travel bubble that local health authorities claim they were not aware of.

Since Friday, New Zealanders have been allowed to fly into Sydney and Darwin as part of the long-awaited trans-Tasman travel bubble brokered by the federal government. However, the Victorian government said it was not told these travellers would then be able to travel on to Melbourne. 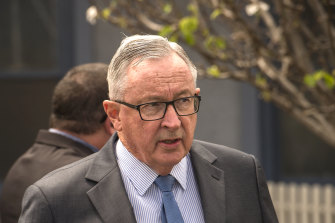 NSW Health Minister Brad Hazzard does not understand why Victoria was surprised by New Zealand arrivals on the weekend.Credit:Steven Siewert

"The advice I had was that Victoria had actually accepted that arrangement," Mr Hazzard told reporters on Monday, noting Victoria’s own health department website said New Zealanders were allowed to travel on from Sydney under the trans-Tasman bubble arrangement if they did not have coronavirus symptoms.

"From our point of view, NSW Health and Border Force have done everything that we were asked to do," he said.

A similar sentiment was expressed by federal acting Immigration Minister Alan Tudge, who claimed to Ray Hadley on 2GB earlier in the morning that Victorian Chief Health Officer Brett Sutton and his deputy were both on two videoconference meetings where the issue was discussed last week.

Mr Tudge said it would be a "real Diedre Chambers coincidence" if Professor Sutton and his deputy, Professor Allen Cheng, were both absent from the meetings on Monday and Tuesday when this exact circumstance was discussed, referencing the 1994 film, Muriel's Wedding.

Speaking at his own press conference on Monday, Victorian Premier Daniel Andrews reiterated that he had declined the option to join the travel bubble. He said his health department's website had been updated to reflect that accepting travellers was the "only option we have got".

"I'm not gonna be quarantining people that came from a low virus community, and we just have to make the best of this," he said.

"They had absolutely no idea … people could turn up or would turn up," he said.

The Victorian Premier said it was "unreasonable" to blame the Victorian government for travellers turning up in the state after he explicitly told Prime Minister Scott Morrison they would not join the trans-Tasman bubble.

Mr Tudge said internal borders were a matter for state governments. He believed people who had tried to board a flight to Queensland, where there is a hard border in place with NSW, would have been stopped at the airport.

"[New Zealand arrivals] go around to the domestic terminal and they jump on a flight because the Victorian government has made no restrictions on travel from Sydney to Melbourne," he said.

Mr Tudge and Mr Hazzard both stressed that there would be no medical grounds to lock out Kiwis from Victoria.

"The risks of a person coming from New Zealand [are] lower than a person who has been in Sydney for a few weeks," Mr Tudge said, adding he had been told Victorian officials at Melbourne Airport made a determination not to quarantine the overseas arrivals because they did not believe they had a reason to do so.

"Their own website expressly says this, and this is why I'm perplexed as to why Daniel Andrews, the Victorian Premier, launched such an aggressive attack on us over the weekend."