Magazine says it failed to anticipate how the op-ed about the vice presidential candidate could be ‘weaponised’. 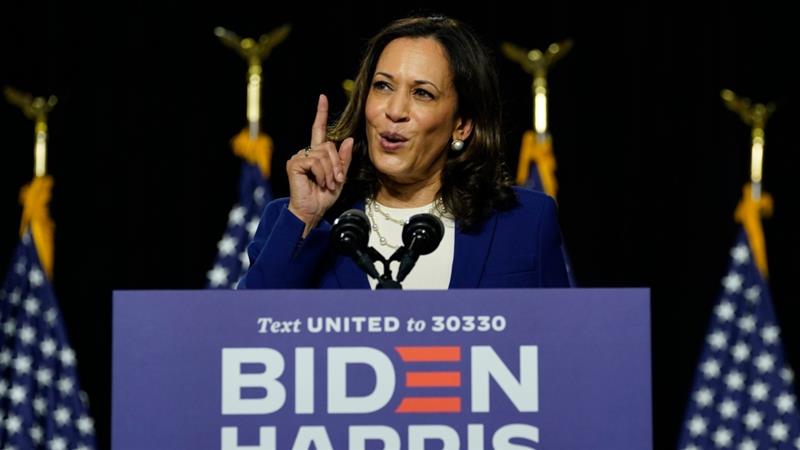 The United States-based news magazine, Newsweek, has apologised for an op-ed that questioned Senator Kamala Harris’ citizenship and her eligibility to be Joe Biden’s running mate, a false and racist conspiracy theory which President Donald Trump has not dismissed.

“This op-ed is being used by some as a tool to perpetuate racism and xenophobia. We apologize,” read Newsweek editor’s note on Friday, which replaced the magazine’s earlier detailed defence of the op-ed.

“We entirely failed to anticipate the ways in which the essay would be interpreted, distorted and weaponized,” read the apology, signed by Josh Hammer, opinion editor, and Nancy Cooper, global editor in chief.

But they ended the note by saying that the op-ed would remain on the site, with their note attached.

The op-ed was written by John Eastman, a conservative attorney who argues the US Constitution does not grant birthright citizenship.

Eastman sowed doubt about Harris’ eligibility based on her parents’ immigration status. Harris’ mother was born in India and her father in Jamaica.

Harris, 55, is the first Black woman and woman of South Asian heritage to be granted the honour of a place on the ticket of a major US party.

Newsweek had earlier defended the op-ed piece, arguing that Eastman “was focusing on a long-standing, somewhat arcane legal debate” about the 14th Amendment and not trying to “ignite a racist conspiracy theory around Kamala Harris’ candidacy”.

But the theory is false. Harris, who was tapped by Joe Biden to serve as his running mate on the Democratic ticket, was born in Oakland, California, and is eligible for both the vice presidency and presidency under the constitutional requirements.

The question is not even considered complex, according to constitution lawyers.

Trump’s political career has seen him questioning an opponent’s legitimacy. He was a high-profile force behind the “birther movement” – the lie that questioned whether President Barack Obama, the nation’s first Black president, was eligible to serve.

Obama was born in Hawaii to a Kenyan father and a white American mother. Only after mounting pressure during his 2016 campaign did Trump disavow his claims.

Asked about the matter at the White House on Thursday, Trump told reporters he had “heard” rumours that Harris does not meet the requirement to serve in the White House.

“I heard it today that she doesn’t meet the requirements,” he said. “I have no idea if that’s right.”

Trump added that Eastman, who is a professor at Chapman University, “is a very highly qualified, very talented lawyer” and that he considered the rumours “very serious”.

Eastman was also an unsuccessful Republican challenger, losing in the primary for the 2010 California attorney general’s election won by Harris, who served in that post before becoming a US senator.