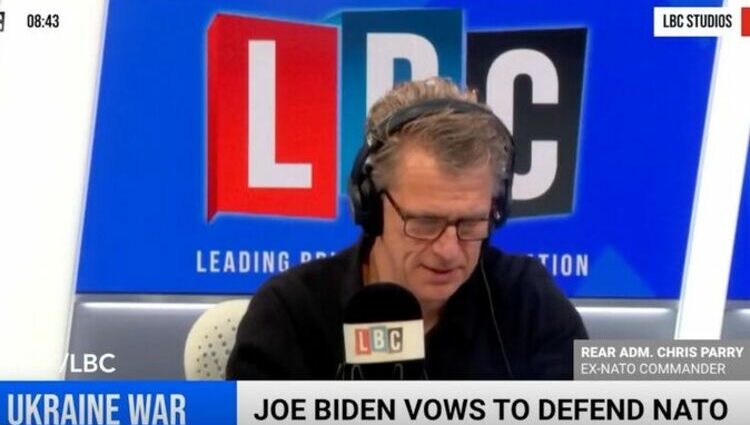 Following Russian troops’s preparation for a new offensive in the south east regions of Ukraine, Former NATO commander Chris Parry warns that considering the situation “we have to accept that Ukraine is never going to get Crimea back”.

Speaking to ex-NATO commander Chris Parry, the LBC presenter said: “It is impossible to see from a strategic point of view these scenes, and we just end to accept that Russia are where they are and there is never going to be a sort of move out”.

The presenter refers to reports from Ukraine which seem to show further evidence of acts of war crimes committed by Russian troops in the Ukrainian territory.

Following the presenter’s statement, the former NATO commander replied: “Maybe not, I think we have to stabilise the situation first”.

He continued: “I think what we have to accept is that Ukraine is never going to get Crimea back”.

“If you look at what happened after 2014, Russia seized Crimea and had a referendum”, added Mr Parry referring to the annexation of Crimea to Russia in 2014.

He also said: “A lot of people were sceptical about [the referendum], but actually I believe quite a lot of people in Crimea wanted to be part of Russia”.

The referendum concerning the status of Crimea was held on March 16, 2014 and results showed that 97% of the population voted for the integration of the region to Russia.

The former NATO commander concluded: “if I were Ukrainian, my question would be ‘‘well, if I give you Crimea, what is the deal?”.

The interview follows evidence from Ukraine that seem to confirm an intensification of Russian troops in the south east regions of Ukraine.

Russian troops, as seen in satellite images, have now left the capital Kyiv and are now regrouping in south east Ukraine.

The new plan in south east Ukraine follows Russia’s unachieved original objective in Kyiv, which would have seen the complete occupation of the capital as well as the replacement of Ukrainian President Zelensky with a pro-Russian figure.

As suggested by military analysts such as Major General James “Spider” Marks last week at CNN, Putin’s new plan would allow Russia to concentrate its forces in south east Ukraine and consequently unify the region of Donbas, now recognised as Russian, with Crimea.

The new objective would potentially allow Russia to create a clear division between the western regions of Ukraine and the eastern ones.

The allegations were also confirmed by reports from Ukraine’s military which seem to indicate that “Russian forces are now completing the creation of offensive groups in the east of Ukraine”.

Confirmation of such claims also come from President Zelensky himself, who this morning said: “Russia wants to destroy Ukraine’s entire Donbas region”.

The Ukrainian President also reiterated the necessity for Ukrainian troops to keep defending the city of Mariupol.

Mariupol, for instance, is believed to be central in Russia’s new objective as being able to connect the region of Donbas with Crimea as well as to allow Russian troops to gain control over areas directly connected to Europe, as military analysts suggested.