Kenosha: About 150 US National Guard troops have been deployed to Kenosha, Wisconsin, part of a massive effort to ensure a second night of calm after several days of demonstrations over the police shooting of a black man and the deaths of two protesters.

Evening fell in the community on Lake Michigan with tensions rising after police arrested some activists protesting the shooting of 29-year-old Jacob Blake, who was paralysed after a white officer shot him seven times in the back on Sunday.

"We're here to preserve public safety and keeping the peace," said Major General Knapp of the Wisconsin National Guard. "That is the bottom line." 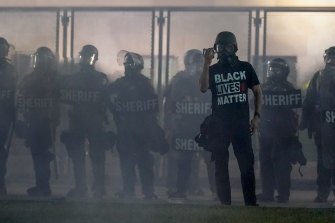 A protester holds up a phone as he stands in front of authorities in Kenosha, Wisconsin.Credit:AP

Blake's death sparked protests also among sports teams with the National Basketball Association postponing playoff games after the Milwaukee Bucks boycotted their play-off game series against Orlando Magic in protest over racial injustice. On Thursday, NBA players agreed not to boycott the rest of the season.

"Myself and our players and our organisation are very disturbed by what's happening in Kenosha," Bucks head coach Mike Budenholzer said earlier.

"It's a great challenge to have an appreciation and a desire for change and to want something different and better in Kenosha and Milwaukee and Wisconsin and then go out and play a game."

The shooting of Blake reignited protests in several US cities over the police killings of black men. The death in May of George Floyd after a Minneapolis police officer knelt on his neck sparked demonstrations across the globe. 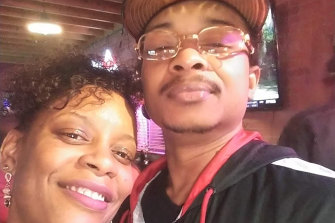 Jacob Blake was shot in the back seven times by a white police officer on Sunday.Credit:Adria Joi-Watkins

Right-wing counter-protesters, at times armed, have also come out in Kenosha and elsewhere, claiming they are keeping the peace and trying to stop looting and rioting. In violent clashes in Kenosha on Tuesday, a 17-year-old armed with a long gun killed two anti-racism protesters and wounded a third.

The teen, Kyle Rittenhouse of Antioch, Illinois, has been charged with two counts of homicide as well as attempted homicide and recklessly endangering the lives of others.

"I would like to dis-invite those people running around with long guns for no apparent reason," Wisconsin Governor Tony Evers, a Democrat, said. "Stay home. Let people here protest peacefully."

Officials said Arizona, Alabama and Michigan would be sending National Guard troops to augment security forces, which until Wednesday night had been the scene of clashes between protesters and police, as well as protesters and members of a mostly white armed militia. 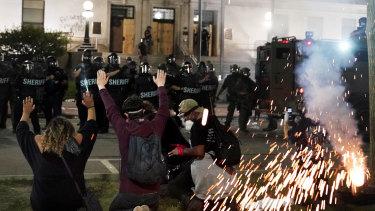 Police attempt to push back protesters outside the Kenosha County Courthouse.Credit:AP

As night fell, protests had begun, with added tension over reports that some protesters had been taken into custody during the day. A Reuters witness saw about a dozen law enforcement vehicles surround a van carrying some of the leaders of prior protests, taking the driver into custody.

"We're all headed over to the jail to find out why," said Clyde McLemore, president of the local chapter of Black Lives Matter. "We always do peaceful marches and that's what we intend for tonight."

McLemore and others are calling for criminal charges to be filed against Rusten Sheskey, the officer who fired seven shots point-blank into Blake's back. Wisconsin state police said Blake's encounter with local officers began after a woman called for help, saying that her boyfriend was not supposed to be on the premises. Wisconsin Attorney-General Josh Kaul said a knife was found on the floor of Blake's car.

Sheskey was suspended for one day in 2017 for a driving-related infraction, but records disclosed so far do not indicate any pattern of excessive force.

Republican President Donald Trump criticised the boycotts, saying the NBA had become "like a political organisation." 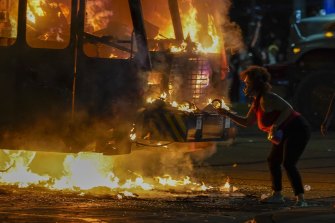 Democratic Senator Kamala Harris, who is running with Joe Biden to unseat Trump in the November 3 election, praised the NBA players and addressed the shooting of Blake.

"It's sickening to watch. It's all too familiar. And it must end," Harris said in a speech.

At a news conference, civil rights leader Jesse Jackson blamed Trump for creating a culture in which police were encouraged to use excessive force.

The strike by NBA players, led by the Milwaukee Bucks, triggered a wave of similar boycotts across various professional sports on Wednesday. NBA Executive Vice President Mike Bass said games could resume on Friday or Saturday, after players agreed not to boycott the rest of the season.

Civil rights attorney Ben Crump, one of the lawyers representing Blake's family, disputed the attorney general's report that Blake had a knife and said he posed no threat.

They also referred to video footage that showed Rittenhouse, the white gunman who had just fired on protesters, walking past a battery of police without being arrested, saying it showed the stark contrast between how the police treated Blake and self-described militia members bearing firearms.

Beth, who in 2018 apologised for saying that five people of colour who had been arrested for shoplifting "just need to disappear," did not respond to a request for comment. Miskinis and Antaramian also did not reply to emails seeking comment.

Are drone deliveries the answer for supply chains in Africa?