Model, 32, who shot dead her British millionaire ex is freed 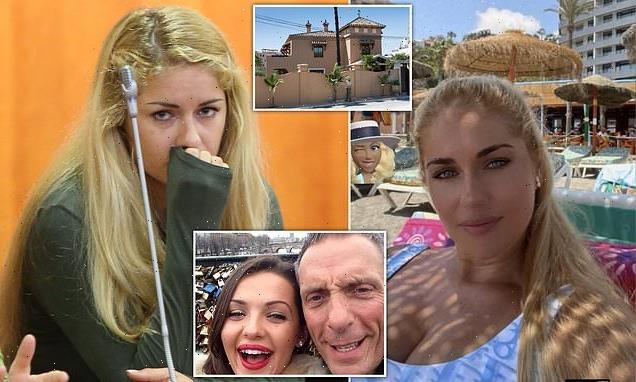 The former swimwear model who shot dead her British millionaire ex-boyfriend in his luxury Costa del Sol home has been freed from prison – just eight years after she gunned him down.

Mayka Kukucova who was aged 26 when she murdered wealthy jeweller Andy Bush, 48, has been brazenly posting social media pictures of herself as she enjoys her freedom in the Spanish sunshine.

She lay in wait for Mr Bush in his villa and shot him twice in the head and once in the shoulder with a .38 revolver in a jealous rage after he arrived with his glamorous new Russian lover in April 2014.

Kukucova fled to her family home in Slovakia after the cold-blooded killing, but she was extradited back to Spain where she was convicted of his murder and jailed for 15 and a half years in May 2016.

She had her sentence reduced a year later to 13 years and nine months – but she has been released early from jail after persuading Spanish authorities that she did not pose a danger to anyone else.

Kukucova has been quick to celebrate her new-found freedom by posting Instagram pictures of her topping up her tan on a Spanish beach in a skimpy black and gold bikini, and enjoying meals out with friends.

An image which will infuriate the family of Mr Bush showed her posing provocatively in a tight white dress while leaning against a palm tree while another featured her cooling off under an outside shower.

Kukucova also reportedly joined her Slovakian parents Danka and Lubomir on the Spanish holiday island of Majorca, where she posted a picture two weeks ago of the three of them enjoying a meal in a restaurant in a shopping mall. 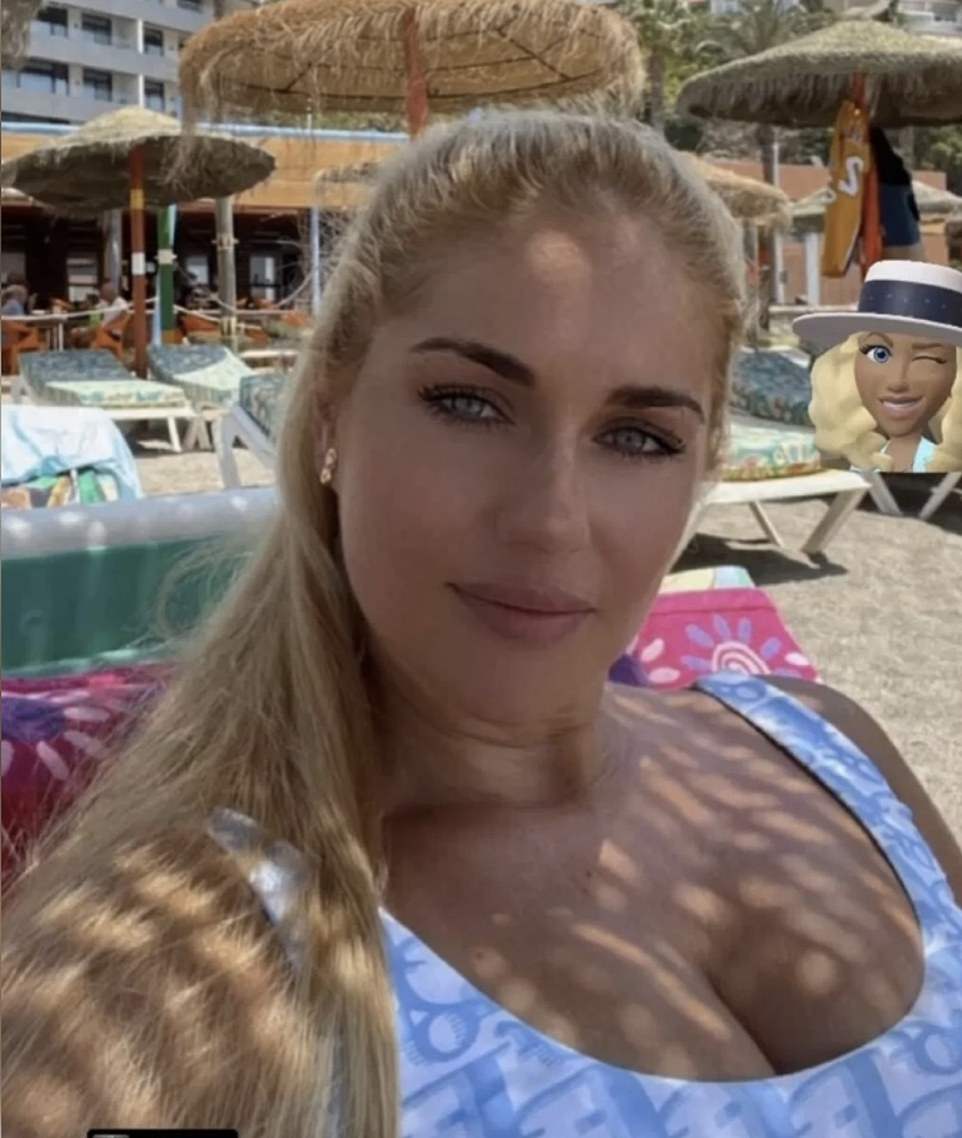 Mayka Kukucova, 32, is lapping up sunshine in luxury in Spain after being freed from jail eight years in her murder sentence 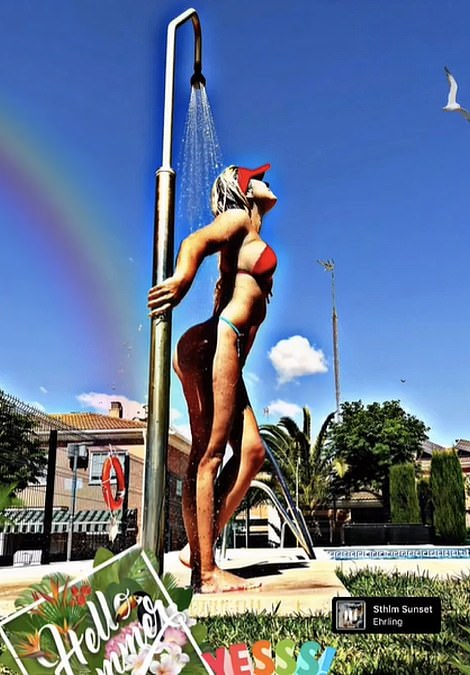 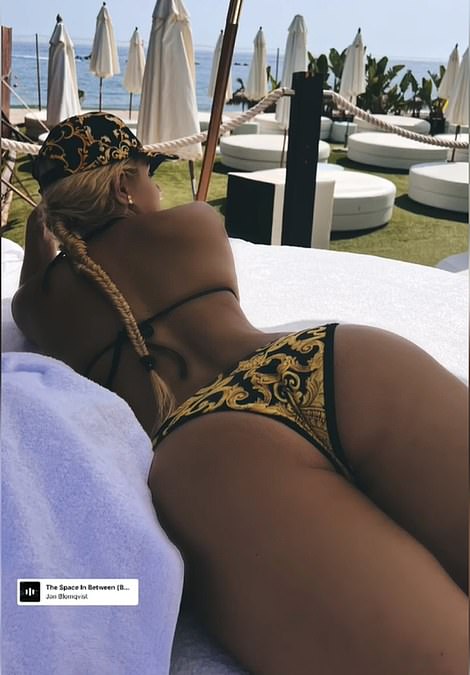 Kukucova, 32, has posed up for a number of glamorous shots posted to social media celebrating her freedom early from jail 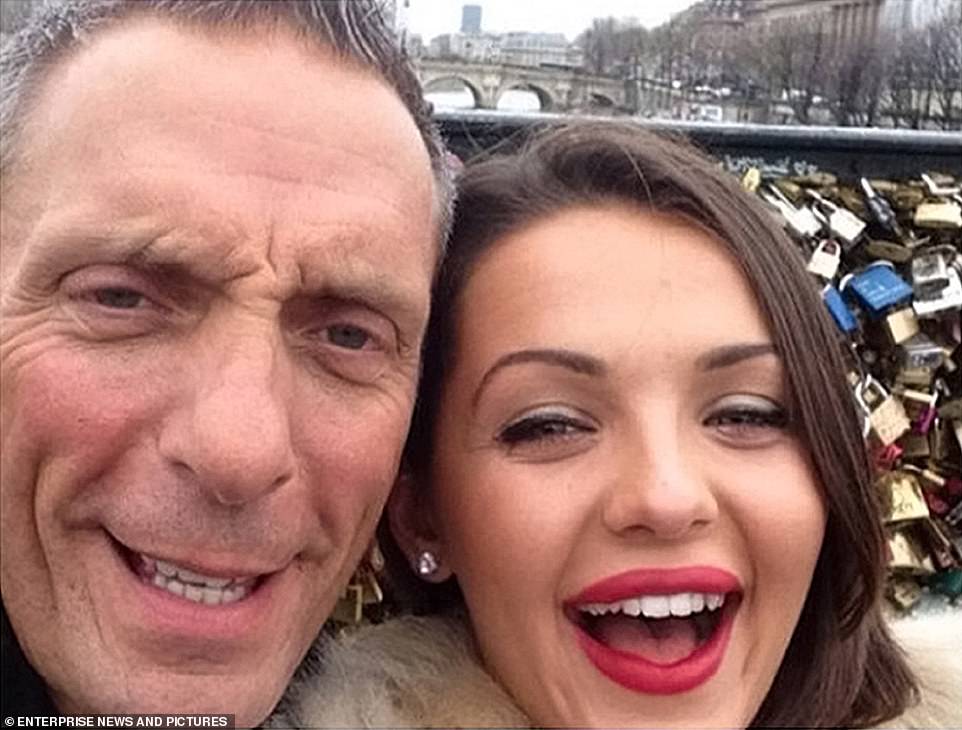 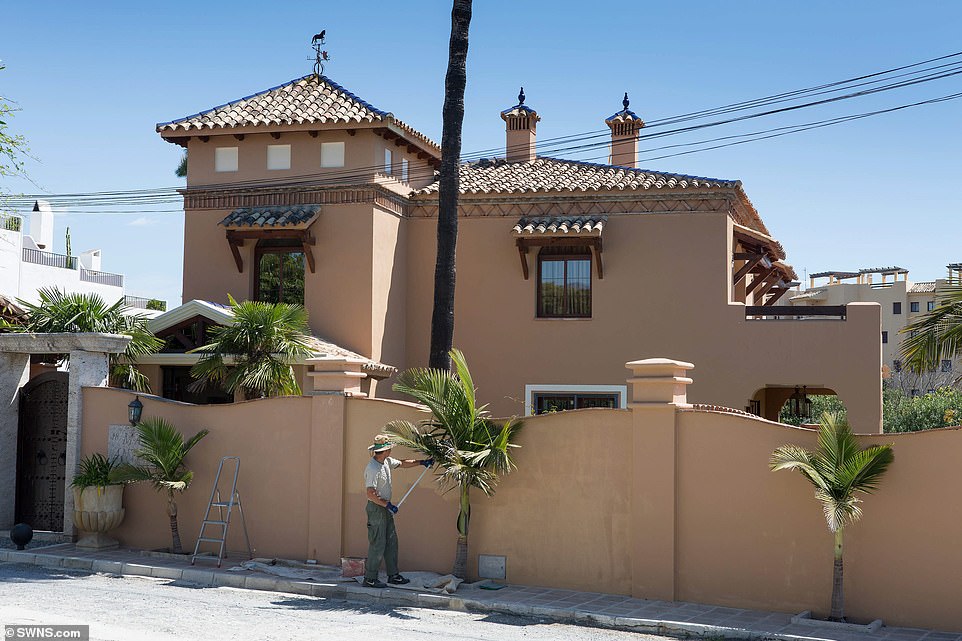 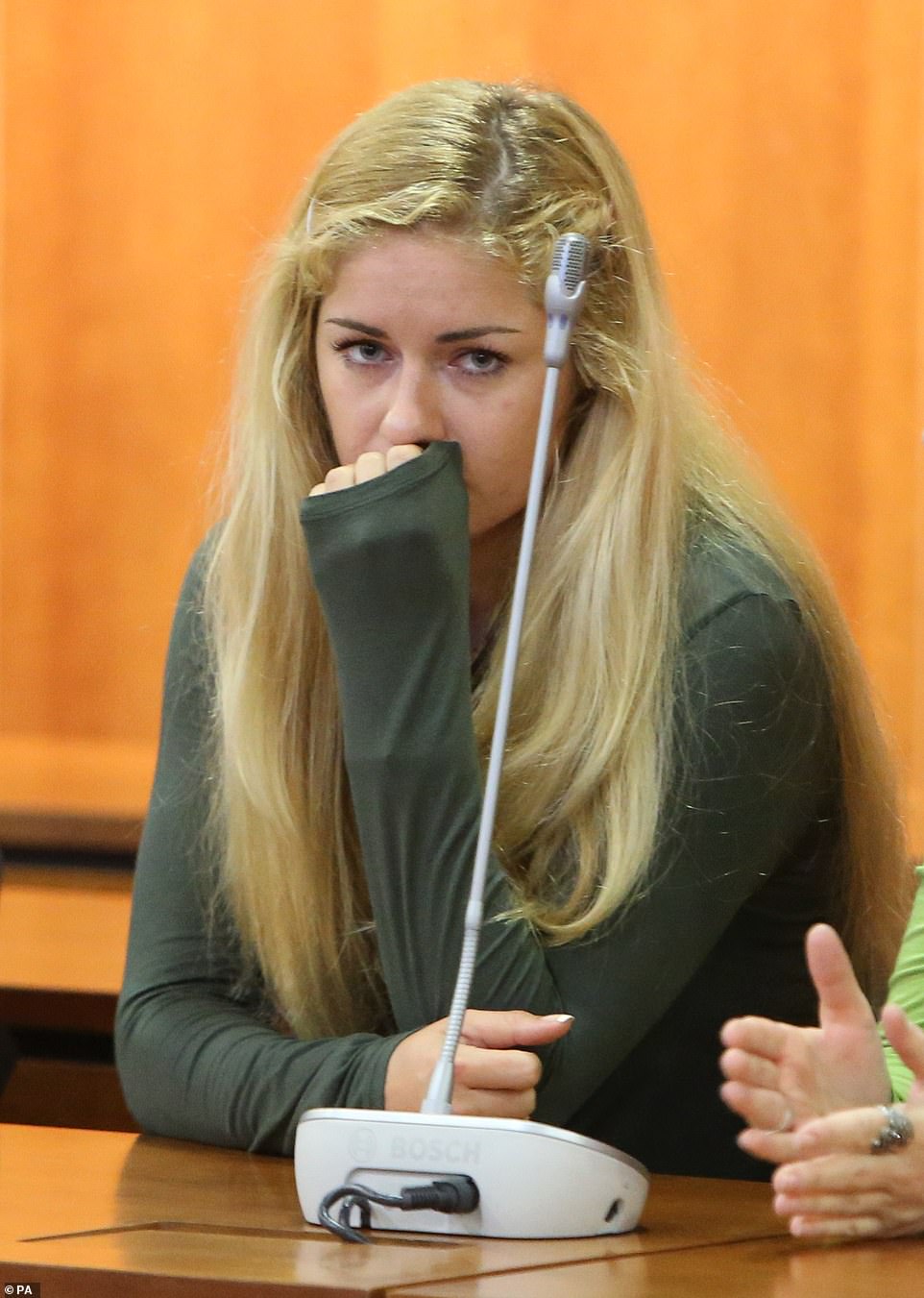 Mayka Kukucova in court in Malaga, Spain, where she was accused of killing her former love British millionaire Andrew Bush

But she since seems to have returned to the Spanish mainland with her most recent selfie on Facebook, showing her posing in bright pink lipstick at a clifftop balcony beauty spot overlooking cliffs and a beach at Nerja near Malaga.

Other pictures on her Instagram account which has since been deleted featured her in a car with a friend and posing next to an airport departures information board.

Several images showed her with a scarf around her wrist, leading to speculation that she might have been fitted with an electronic tag to monitor her movements after her prison release.

Kukucova, now 32, is thought to have served the bulk of her prison sentence in a Spanish jail which was described by Slovakian media as being ‘more like a resort than a jail’.

She reportedly learned new languages, taught English to other prisoners and even had a chance to go swimming while behind bars, according to one of her relatives.

Kukucova refused to comment about her new found freedom when contacted by Slovakian magazine Plus Seven DNI.

She reportedly said: ‘Thank you for the offer, but it is not current at the moment, and I need to consider offers from other media as well.’

Her father added in Slovakia: ‘We don’t want to comment. We have already had enough.’ 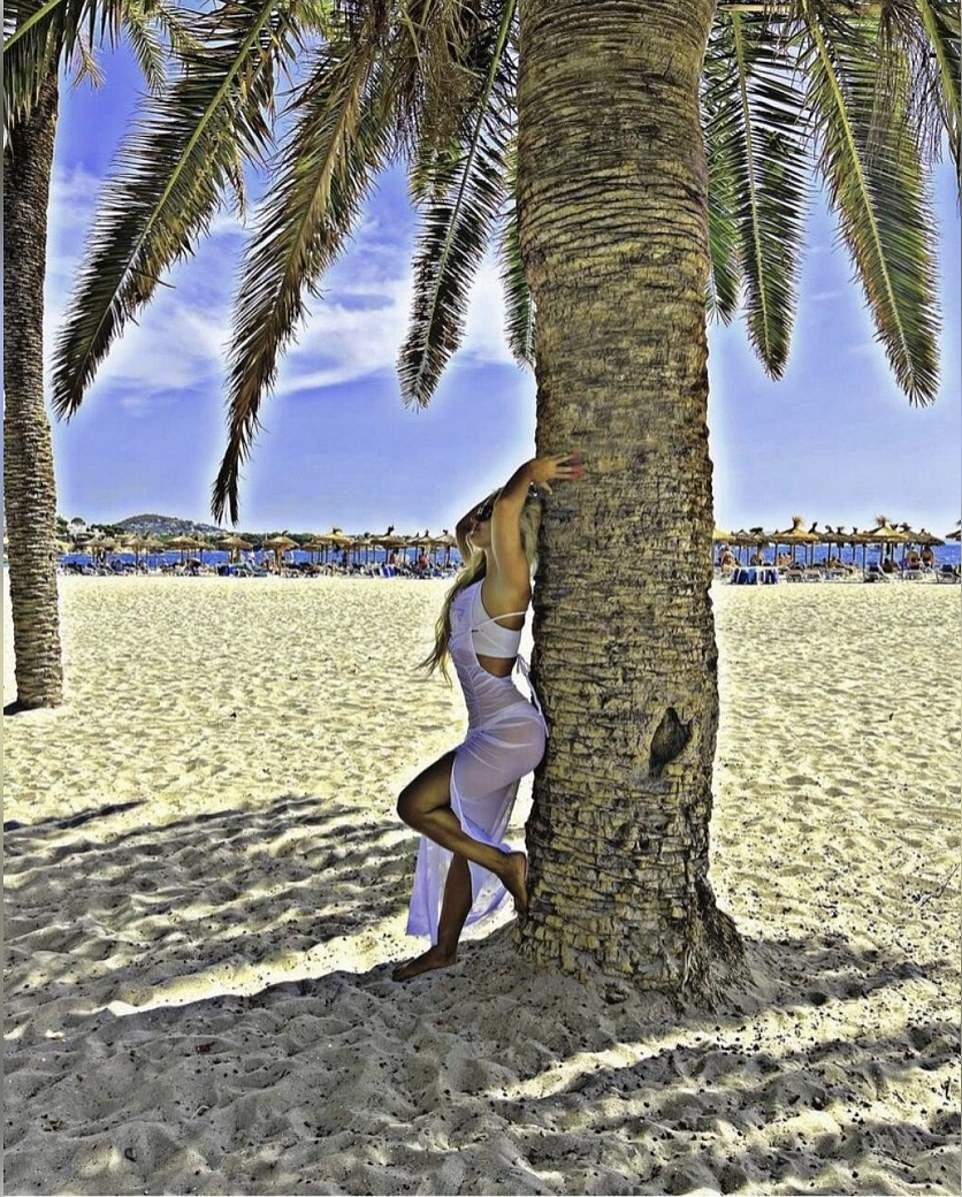 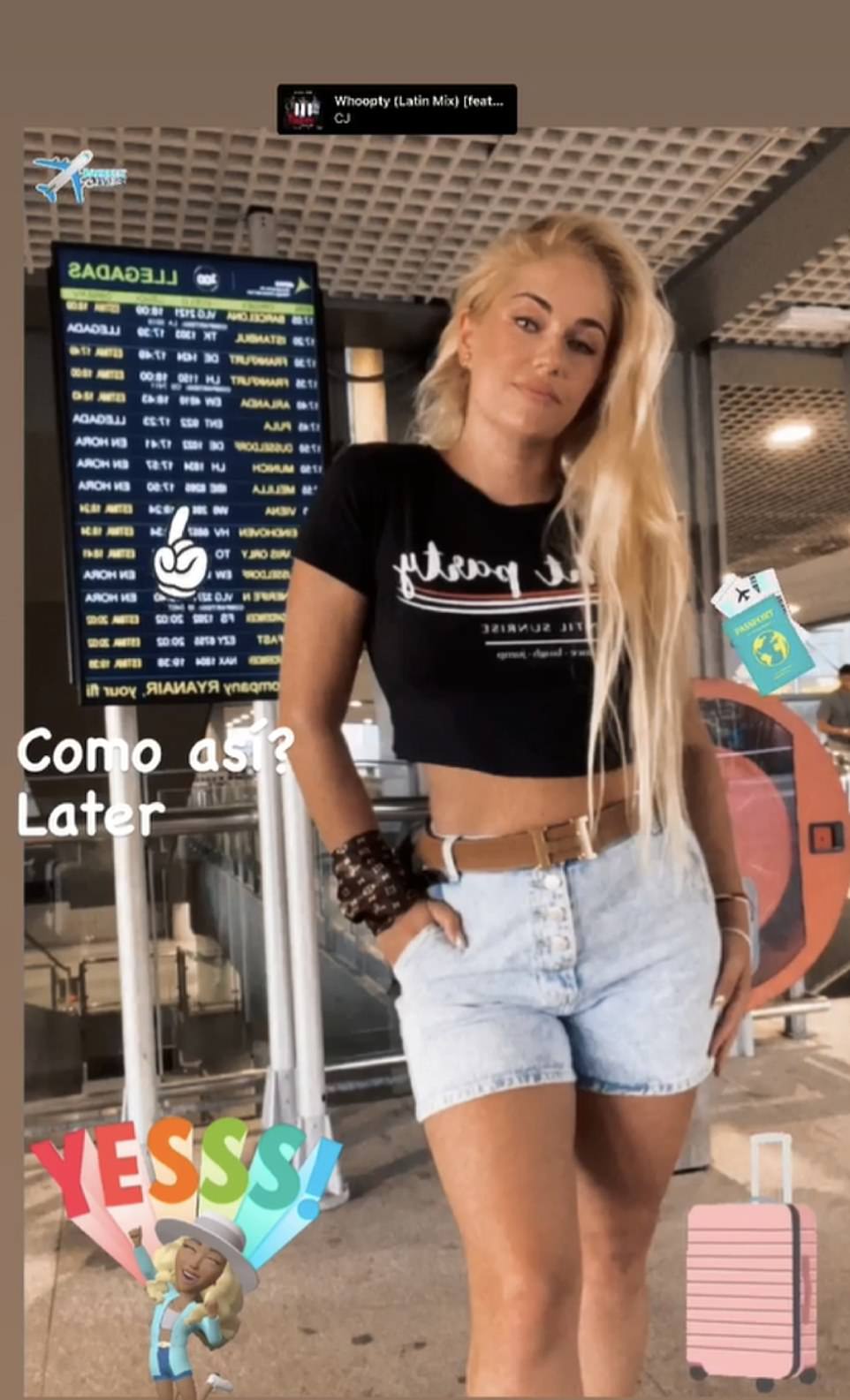 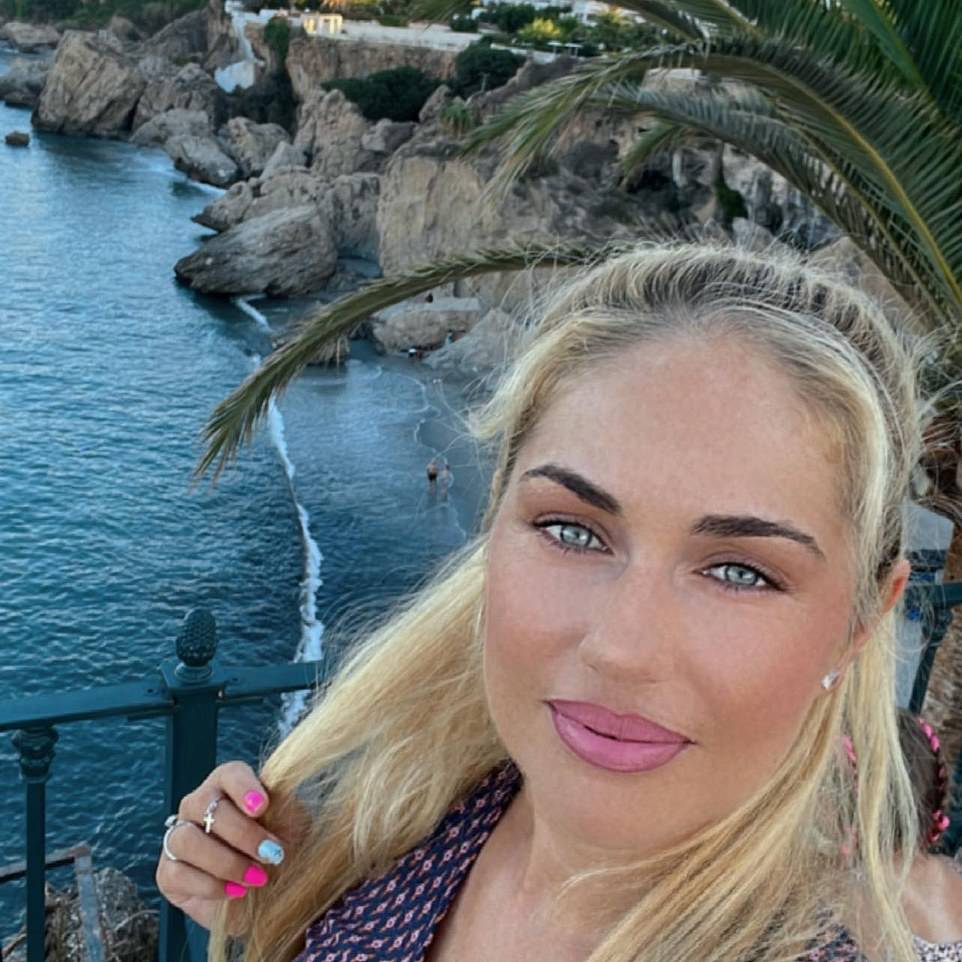 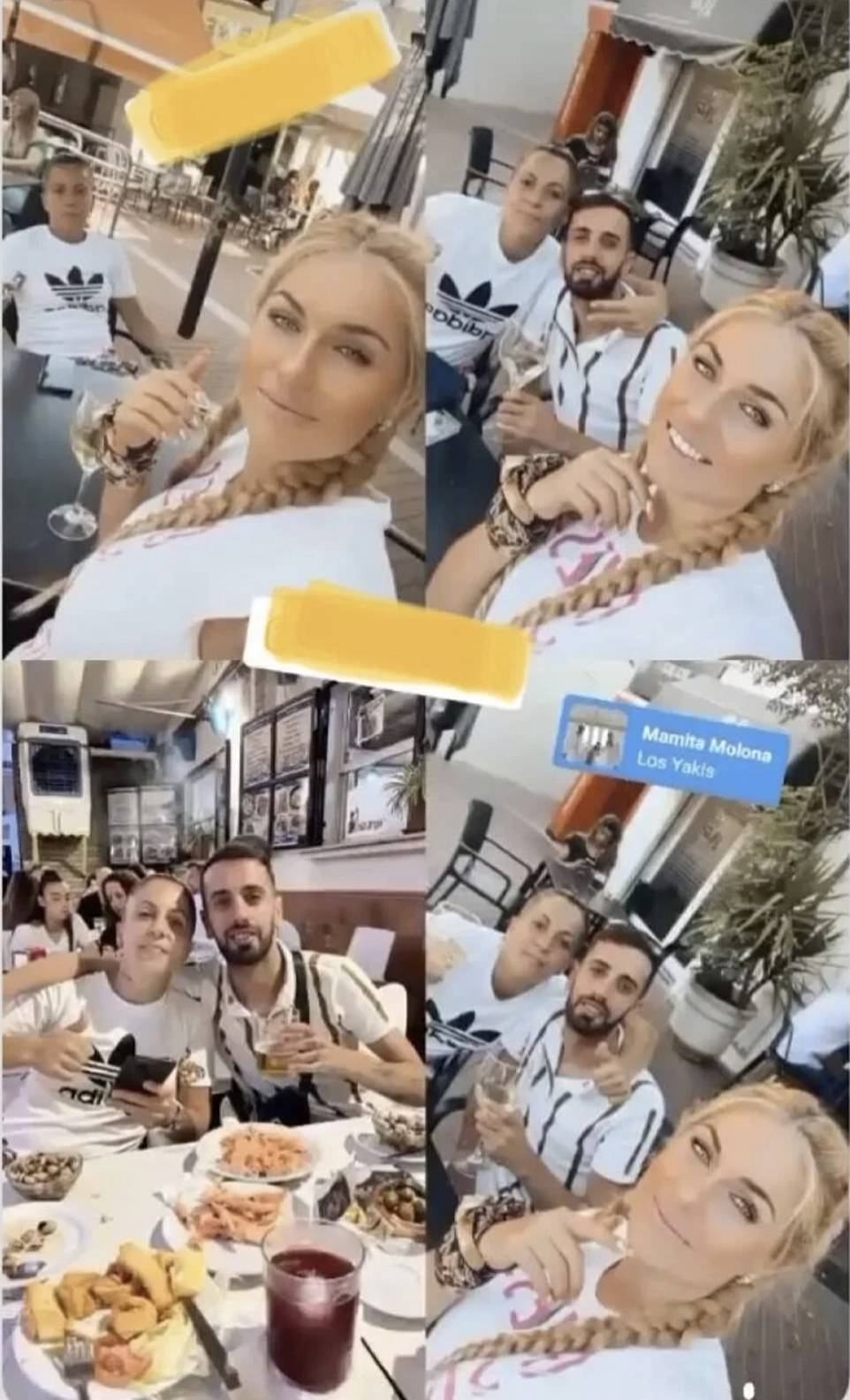 Before the murder she had been a heavy social media user, a trait she has returned to after being released from prison

Kukucova started dating former body builder Mr Bush – known to his customers as ‘the King of Bling’ – after he gave her a job at one of his chain of Gold Trader shops in Bristol.

The couple enjoyed a luxurious lifestyle splitting their time between Mr Bush’s a five bedroom home surrounded by seven foot high walls near Chepstow racecourse in rural Monmouthshire, and his Spanish villa in Cancelada outside Estepona.

But their relationship became turbulent as Kukocova flew into frequent tantrums, and jealous rages, and constantly checked his computer and mobile phone.

Mr Bush who had a fleet of luxury cars including a red Ferrari convertible, a grey Lamborghini and a top of the range Hummer 4 x 4 which he kept in Spain, finally dumped her in November 2013 after a two and a half year relationship.

He then started a relationship with Russian student Maria Korotaeva, 28, after meeting her at a Costa Coffee in Bristol.

Kukucova is said to have hidden for two days in Mr Bush’s villa without his consent before he and his new lover arrived there on April 5, 2014, after flying out for a romantic break.

Gold dealer Mr Bush who is said to have proposed to Miss Korotaeva just hours earlier over dinner found his former girlfriend in his bed, but she refused to leave.

He told Miss Korotaeva to wait in his car while he talked to his ex-lover, but she then shot him three times inside the villa. 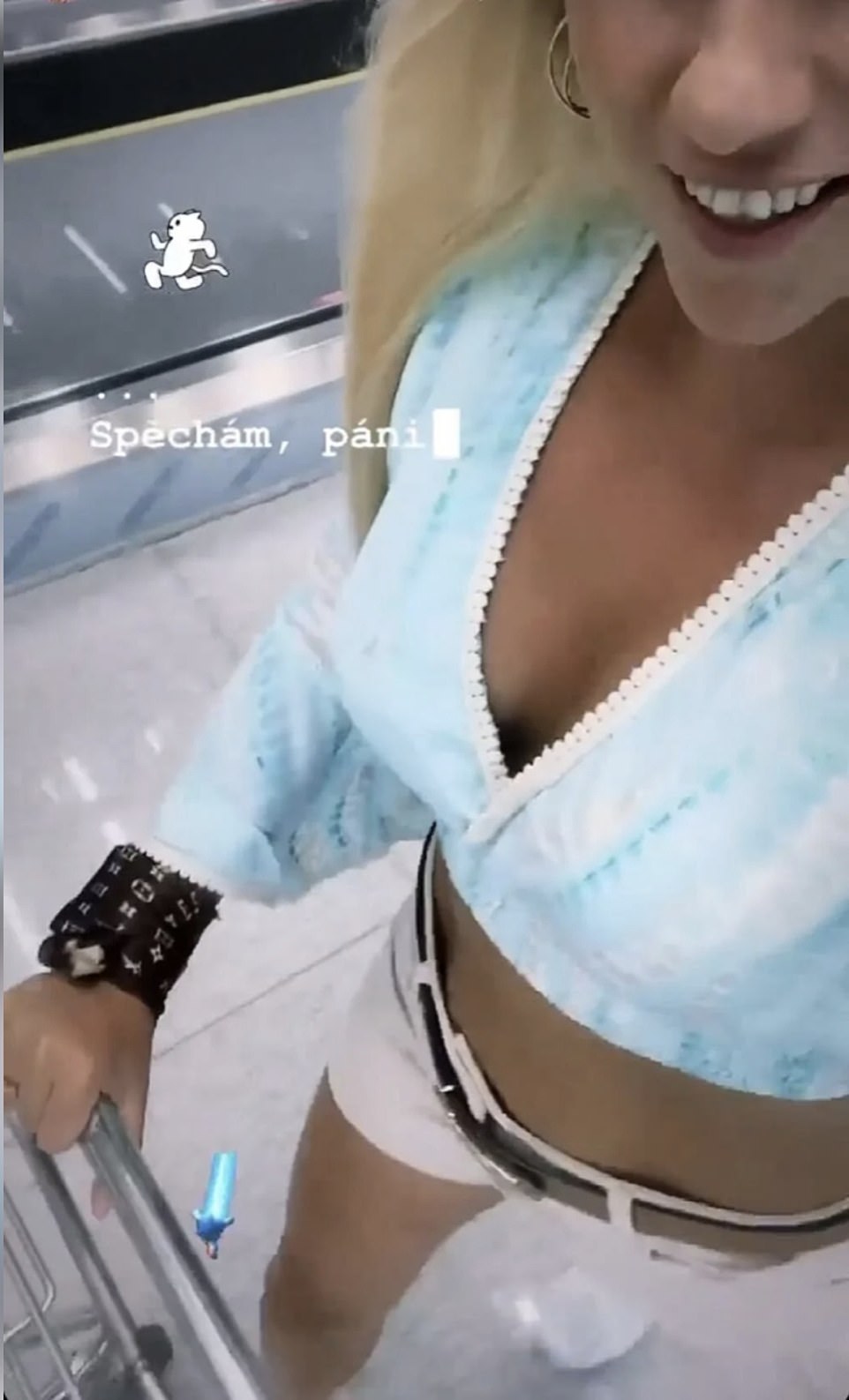 It is believed that she may have a tag on her wrist as part of the terms of her release, which she hides with a scarf in pictures 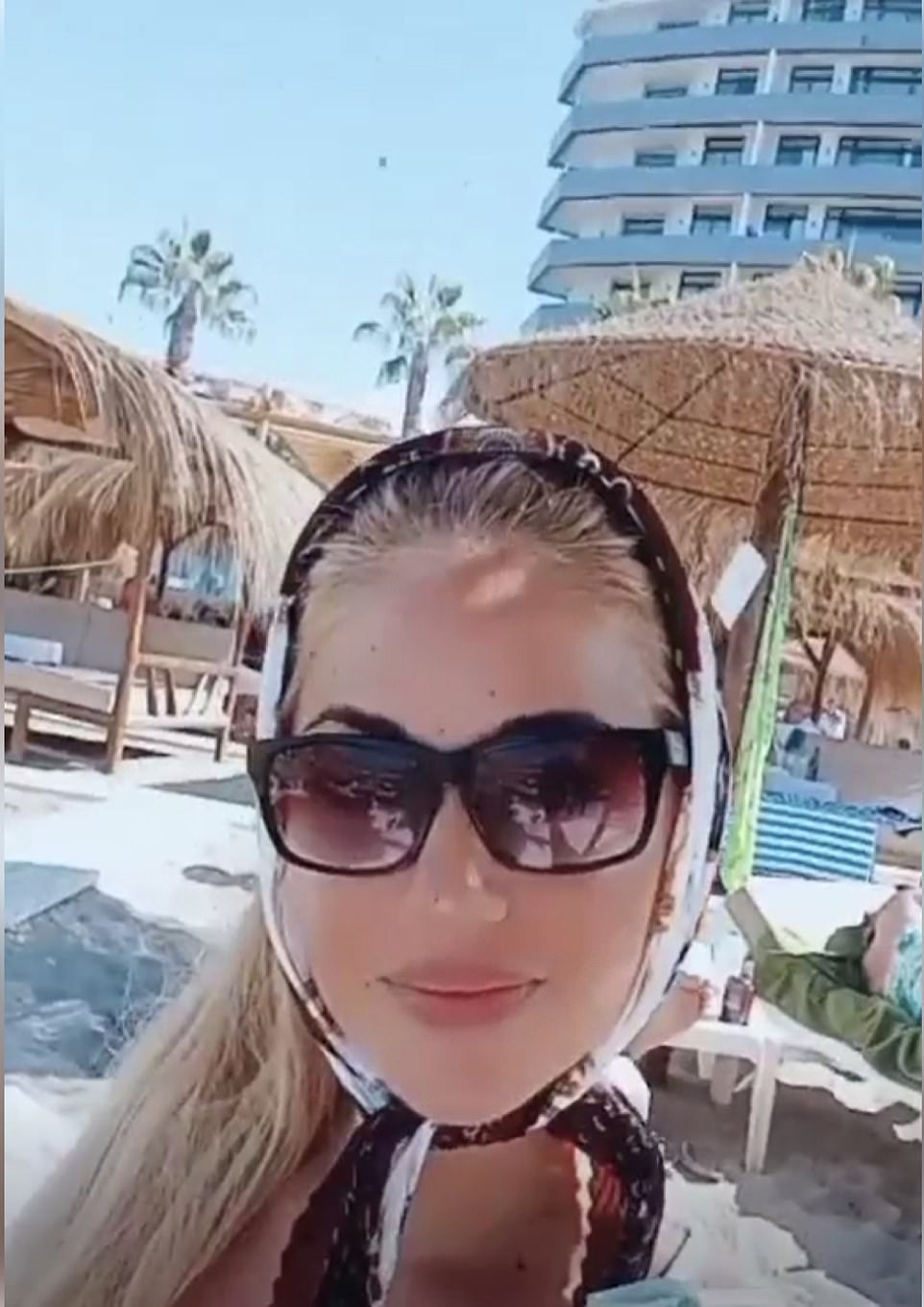 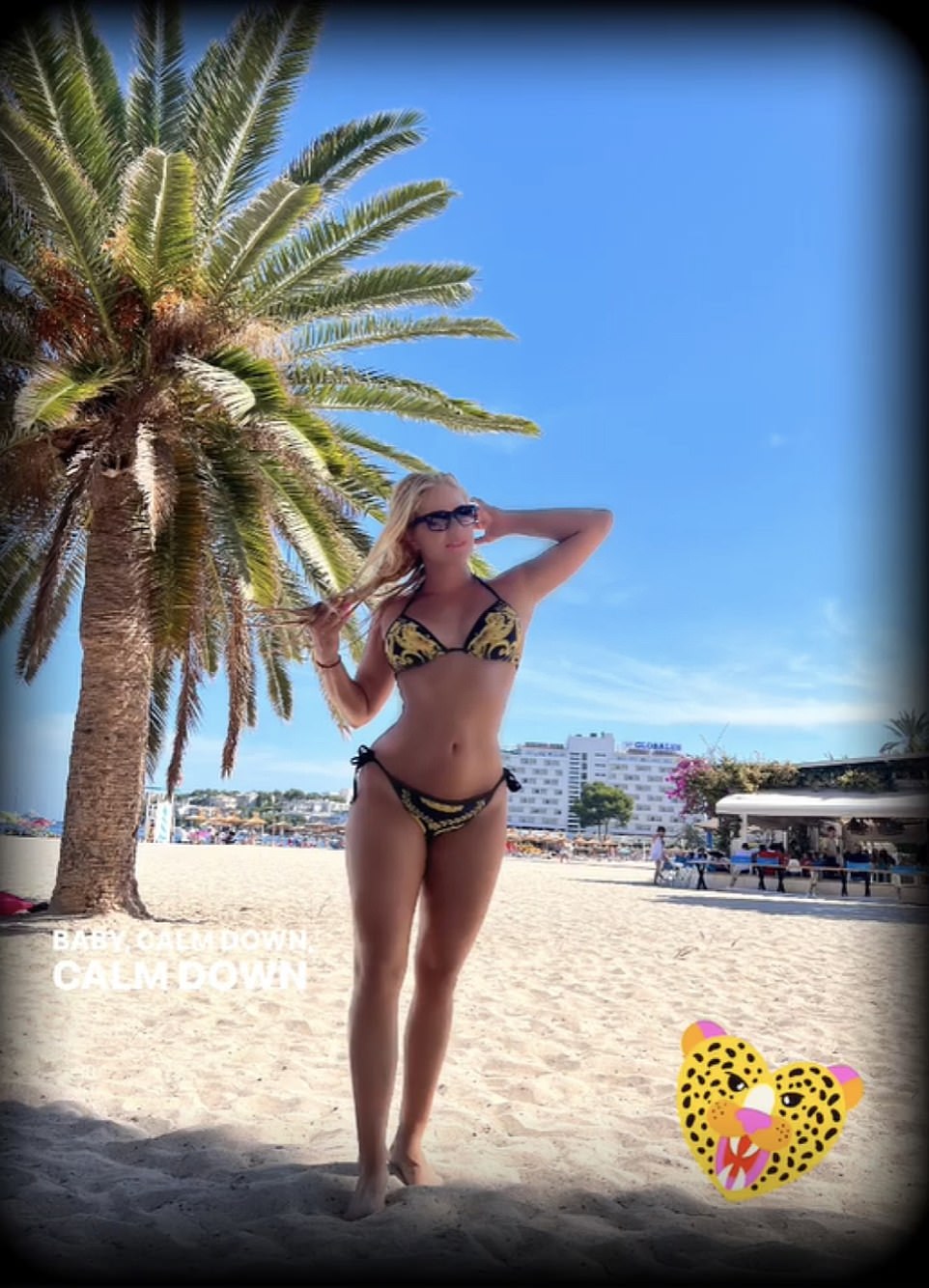 She fled after placing the gun in Mr Bush’s hand to make out that he had shot himself.

Kukucova ordered terrified Miss Korotaeva out of her ex-lover’s £60,000 gold-plated Hummer, saying that he had given her permission to drive it to the airport.

She abandoned the car nearby, and called a former boyfriend in Slovakia for help.

He flew over to Madrid to meet her and they drove back across Europe to her home town of Nova Bosaca where she gave herself up to police.

She was extradited back to Spain and is said to have got into a fight with a suspected Mexican drug dealer after accusing her of stealing her mini skirt in a high security Spanish jail in January 2015.

Kukucova claimed during her four day trial in Malaga in May 2016 that she acted out of self-defence and ‘insurmountable fear’.

She said that she had never intended to harm Mr Bush and that she had shot him after he attacked her and threatened her with the gun.

But the jury dismissed her story and convicted her of murder.

Mr Bush’s ex-wife Sam Mason, the mother of his daughter Ellie, now 27, blasted Kukucova after the verdict, and called for her to jailed for 20 years.

She tweeted: ‘Twenty years for the murderous cow. Hope she rots. At no stage has she apologised to my girl. Blaming Andy, low life scum.’

Judge Ernesto Carlos Manzano could have jailed Kukucova for up to 22 years, but ruled it was essentially a crime of passion, and that she had acted in ‘a passionate state of mind’.

He gave her a 15 year sentence with an additional six months for breaking into the villa after taking into account that she had no previous convictions and had made a ‘heartfelt apology’.

Her overall sentence was later reduced on appeal by 18 months after judges ruled that her confession to the crime had lacked ‘total veracity’, and that more account should have been taken of her giving herself up while on the run.

Mr Bush’s sister Rachel told in an interview last August how she could never forgive Kukucova and wanted to see her executed.

She told The Sun: ‘I’ve lost my brother, who was my best friend. She didn’t just destroy her own life and her family’s life, she’s changed our lives forever.

‘It’s a shame it wasn’t in America in a state where if you take a life then your life gets taken, because that’s what would make me feel that’s proper justice.

Rachel added: ‘I could never forgive her. For my own soul and spirit, that’s what you should do, but I don’t know how anybody could forgive that.

‘So she can still live her life. Where is Ellie’s dad and her relationship with her dad gone? Ellie always says, “I’ll never have my Dad to walk me down the aisle”.’

Rachel said Kukucova had been obsessed with her brother’s fortune.

She said: ‘I could tell their relationship was a bit rocky. I said to him, “If you are splitting up, you need to watch your back, because she is not right”.’

‘And I’ll never forget I said that to him. She’s a pretty girl, but to me she’s ugly, couldn’t get no uglier, because she’s got the ugliest personality on this earth. All she was interested in was money.’

Miss Korotaeva told in a book last year that she believed Kukucova was actually instructed to carry out the killing over her his plans to establish a jewellery business in London.

She claims he received death threats in the weeks before his murder, but that they did not report them as they did not take them seriously.

Miss Korotaeva told how Mr Bush had proposed to her over dinner just hours before he was murdered.

Speaking of Kukucova, she said: ‘I’m now worried she may come find me when she gets out. God knows what she is thinking. What is in her head?’