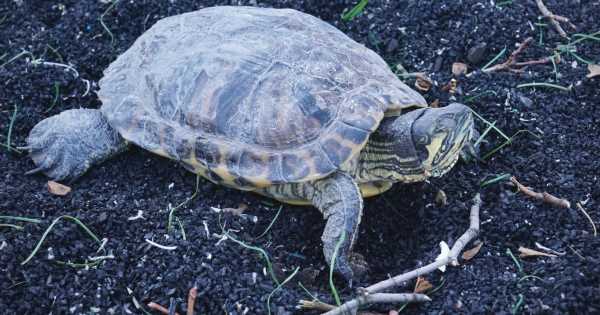 A turtle has miraculously escaped almost unscathed after it appears to have been blown out of its home during shelling in Ukraine.

The turtle was found by Ukrainian journalist Dima Replianchuk, who was reporting in the area of Obolon in Kyiv following the devastation caused by Russian troops.

Mr Replianchuk found the turtle with a “wounded paw” and waited on the grass with the animal to try and find its owners.

He believes the turtle could have been sent flying from the window of the apartment on the fourth floor.

“When I went a little further to make a general perspective, I saw a turtle with a wounded paw on the football field,” Mr Replianchuk told the Daily Star.

“Most likely, this turtle was blown out of a window on the fourth floor. The apartment itself was destroyed.

“I took the turtle with me and took it to the Red Cross medics so that they could bandage its paw and then hand it over to the owners.”

Mr Replianchuk posted about the turtle on March 14, where the post has been shared almost three thousand times.

A Ukrainian woman who fled her home believed it could have been her turtle that she was forced to leave behind.

The turtle has reportedly been treated and has been given to a neighbour where it was found until the owners are traced, according to Mr Replianchuk.

He added: “I also wrote about it on Facebook and many people shared this story. So in the evening I was contacted by the probable owner, who is not in Kyiv now.

“As far as I understand, the Red Cross passed this turtle to the neighbours, so I hope that soon the turtle will return to its owner.”

However, it has since been confirmed that the turtle Mr Replianchuk had found is not the one that belongs to the woman.

Meanwhile, Rescue workers on Thursday dug survivors out of the rubble of a theatre in the besieged city of Mariupol which Ukraine said had been hit by a Russian air strike as people sheltered there from bombardments. Russia has denied striking the theatre.

Lates News:
2022-03-17
Previous Post: Husband, 71, who stabbed his 74-year-old wife to death in her own bed
Next Post: Treasuries Close Roughly Flat After Seeing Early Strength