A mayoral candidate in Mexico was ambushed by a rural town’s residents, forced to walk the streets barefoot and had a noose placed around his neck in a mock execution after he ‘failed to deliver’ on his promises as a congressman.

Juan Camacho was campaigning in San Cristobal de las Casas on May 16 when he and 20 of his staff were ambushed and held captive for nine hours.

Residents in the rural neighborhood of Los Llanos crowded around Camacho and peppered him with questions about public works projects that he had promised in exchange for votes that eventually landed him a seat in congress in 2018.

Among the promises he failed to deliver on, residents accused him of not paving the roads, and  failing to provide adequate drinking water and proper schooling for children.

A video published on May 19 shows the moment Camacho tries to plead his case to residents. It was reported that his captors wanted $15,000 for his release.

‘I have 100,000 pesos, that’s all I have. I swear,’ Camacho told a male individuals as dozens of other people shouted for him to be taken away. 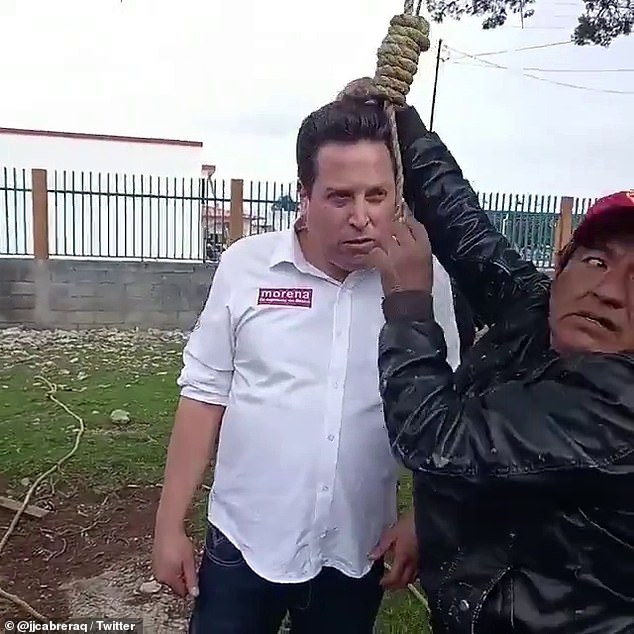 Subsequently, two men, including the one who Camacho was seen talking to in the video, grabbed him by the arm and paraded him down a dirt road. They then walked him into what appeared to be a concrete soccer court. 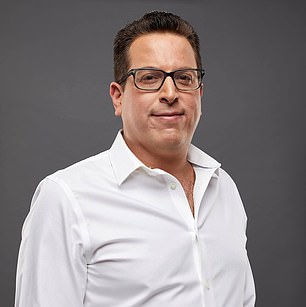 Juan Camacho was campaigning in San Cristobal de las Casas on May 16 when he and his staff of 20 workers were sequestered for nine hours by residents from the indigenous rural community of Los Llanos. He denied claims that he paid them $15,000 to let him go

In a separate video recording, another man can be seen removing a rope that was hung from a tree branch and tied around on Camacho’s neck after the mayoral hopeful reportedly came to terms with the residents to secure his freedom.

Camacho told Mexican news network Milenio TV that he had never visited Los Llanos to campaign in the past and denied reports that he paid his own ransom.

He mentioned that he was never beaten and that it was all done as a ploy to threaten him into hearing their concerns.

‘We knew that it was a community that had fame for being quite conflictive and it is highly marginalized,’ Camacho said. ‘Unfortunately they took me by force because the community’s residents have a pent-up frustration towards current and past city government who have neglected them.’ 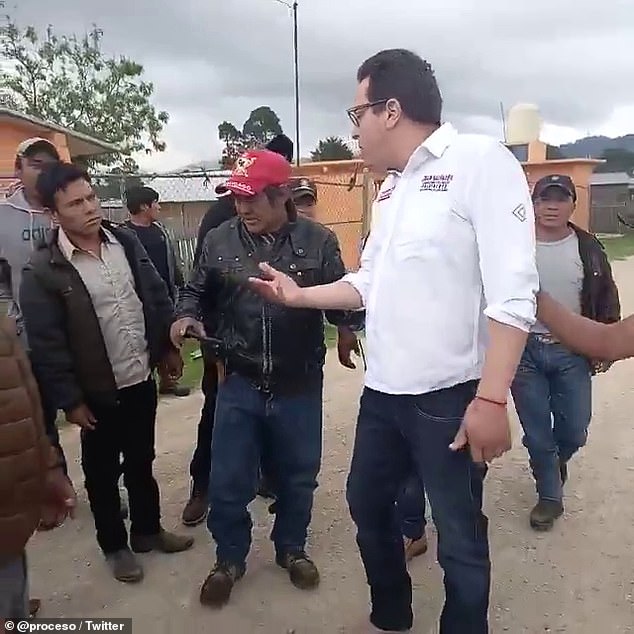 Juan Camacho is seen on video trying to negotiate with residents from the community of Los Llanos and offered them 100,000 Mexican pesos at one point before they forced him to walk barefooted down a dirt road and them tied a rope around his neck 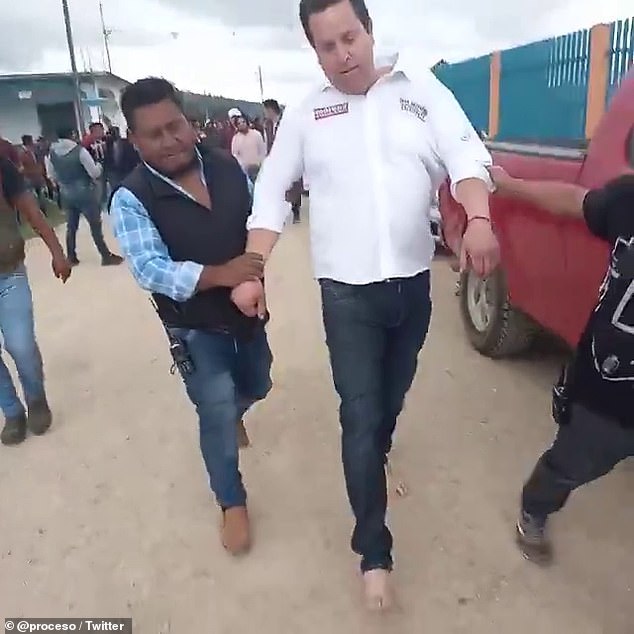 Camancho said he agreed to return to the town on May 30 to discuss residents’ concerns.

‘One of the agreements was to return to the community and present the campaign proposals, but we also promised to prioritize humane development projects such as electricity, paving (in the streets), guaranteeing drinking water,’ Camacho explained.

While Camacho, who is running on President Andrés Manuel López Obrador’s leftist National Regeneration Movement ticket, escaped unscathed, there have been many instances in which candidates who are running for offices have been beaten or murdered.

According to report released by Etellekt, a security consultancy, there have been 476 assaults and 79 assassinations reported ahead of the June 6 mid-term elections.

Political assassinations are up by more than a third from the last mid-term vote in 2015, when 61 were logged over nine months. The death toll comprises party members and those who sought, or who have held, public office.

Abel Murrieta was handing out campaign flyers on the street this month when a gunman shot him in broad daylight at point-blank range, making him the latest candidate murdered in one of the bloodiest election campaigns in Mexico’s recent history.

Murrieta died in Ciudad Obregón, a city in the northern state of Sonora named for former Mexican president Alvaro Obregón, who was himself shot dead in 1928 before he could begin a second term.

‘We’re attending to candidates every day, to leaders being threatened, and in some cases killed, unfortunately, as happened in the case of the candidate in Cajeme,’ López Obrador said in reference to Murrieta last week.

The election will determine who controls the lower house of Congress, 15 governorships, and hundreds of city halls.

López Obrador, who has promised justice for the victims, argues that the corrosive effects of corruption in past governments are fueling violence in Mexico.

His government said on Friday it is looking at nearly 400 complaints or investigations relating to electoral violence and that 148 candidates have received protection. Still, most murders go unsolved in Mexico, studies show.

Much of the upheaval has been concentrated in a cluster of interlinked states: Veracruz, Oaxaca, Puebla, Guerrero, the State of Mexico and Michoacan, according to Etellekt.

When Lopez Obrador won the July 2018 presidential election – before the coronavirus pandemic curbed the scope for campaigning – there were 152 political killings over the preceding ten months, 26 of which were in the final two weeks of the campaign, Etellekt said.