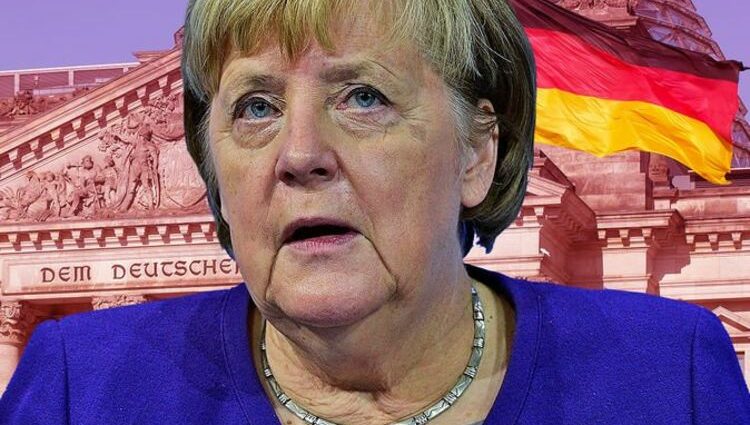 Merkel 'never stood up for a vision of Europe' says expert

Mrs Merkel’s 16-year reign came to an end last month. She received an influx of praise upon her departure from office, both national and international. But opinions are never universal, with many having made it quite clear they weren’t upset to see her Chancellorship come to an end.

According to German political Stephan Brandner, Mrs Merkel’s rule could hardly be considered successful, having instead left Germany “ruined”.

From immigration, to the euro crisis, to green energy, the Chancellor should not be celebrated for her record, he said, but rather be remembered for the “damage” she inflicted.

Mr Brandner said: “The euro crisis, the so-called energy transition, the broken infrastructure, mass migration and ultimately the completely misguided Corona policy – these examples alone show how great the damage to Germany is that Merkel’s policy has caused.”

His view contrasts fairly strongly to those put forward by numerous world leaders’ after Mrs Merkel stepped down.

Prime Minister Boris Johnson titled her a “titan of international diplomacy”, adding that the Chancellor made “the greatest contribution to the international stage” compared with all other European leaders this century.

US President Joe Biden, who is known to have had numerous disagreements with Mrs Merkel, added: “On a personal note, I must tell you I will miss you at our summits.”

But while these could be dismissed as passing, diplomatic comments from those far away, Mr Brandner is likely to have been particularly frustrated by the message put forward by Mrs Merkel’s replacement as Chancellor.

Olaf Scholz belongs to a different political party than his predecessor but has vowed a certain extend of continuity.

The new Chancellor, quoted in POLITICO, told Mrs Merkel: “It was a great time when you were Chancellor, and you also achieved great things.”

Noting that he and Mrs Merkel are both from northern Germany, he added: “I would like to continue with the northeast German mentality that has prevailed here up to now.

“Not so much will change there.”

Mr Brandner expressed particular concern over Mrs Merkel’s handling of immigration, on which he may worry a similar approach could be adopted by Mr Scholz.

Responding to the suggestion that a migration foundation should be established bearing the former Chancellor’s name, he fumed: “It is shocking and unworldly that there are actually still people in the CDU [Mrs Merkel’s political party], who rate mass migration to Germany positively.

“Instead of a foundation, a memorial should be dedicated to Merkel and on it, it should also be immortalised how many thousands of billions of euros and human sacrifices this Chancellor’s term has cost us!”

He has been a member of the Bundestag, Germany’s federal parliament, since 2017.