Ellefson said the messages, which leaked online and were said to be ‘explicit screenshots and videos’ were ‘private, adult interactions that were taken out of context,’ according to NME.

The female involved also allegedly released a statement, which Ellefson shared on social media. In it, she said she was not underage when the interactions – which she said were all online – took place; the statements couldn’t be independently verified and have since been deleted.

It’s not clear what would have changed in the two weeks since the allegations first surfaced and Monday, when co-founder Dave Mustaine announced the news of his longtime collaborator’s departure on social media. 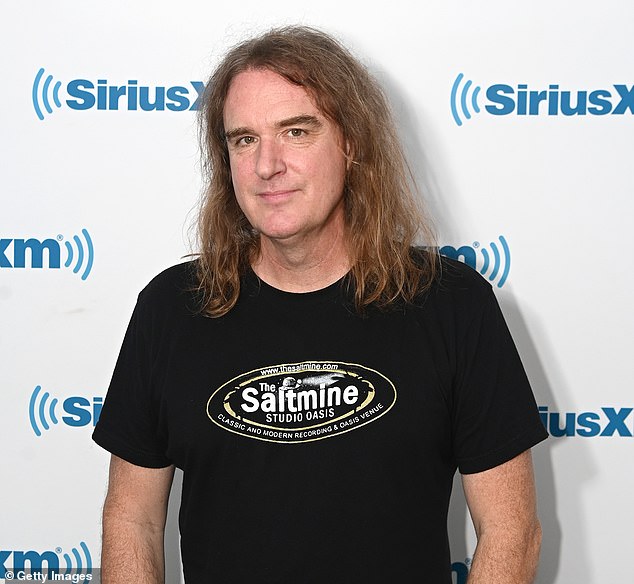 Fired! Megadeth announced they have parted ways with bassist and co-founder David Ellefson (above 2019)  a second time amid new accusations of sexual misconduct. He has denied the claims on social media accounts that has since been made private

‘While we do not know every detail of what occurred, with an already strained relationship, what has already been revealed now is enough to make working together impossible moving forward,’ Mustaine wrote.

‘We are informing our fans that David Ellefson is no longer playing with Megadeth and that we are officially parting ways with him. We do not take this decision lightly,’ the statement read.

Mustaine, 59, and the rest of the Symphony of Destruction rockers said they felt the need to cut ties with Ellefson before moving forward and releasing their new studio album.

‘We look forward to seeing our fans on the road this summer, and we cannot wait to share our brand new music with the world. It is almost complete.’

The band is scheduled to kick off a tour on August 20 in Austin, Texas, Rolling Stone reports.

The bassist was accused of ‘grooming an underage girl through messages and videos online, which circulated on social media,’ according to Variety. 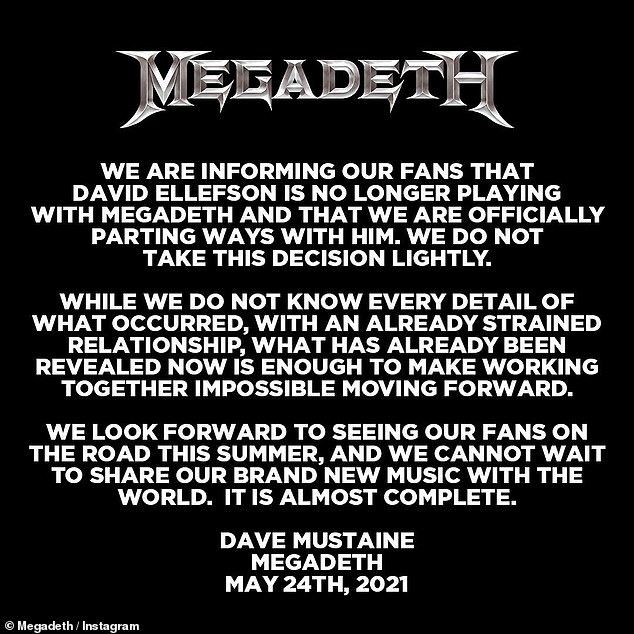 The band’s lead singer, guitarist and other co-founder Dave Mustaine announced the news of Ellefson’s firing on social media on Monday, May 24 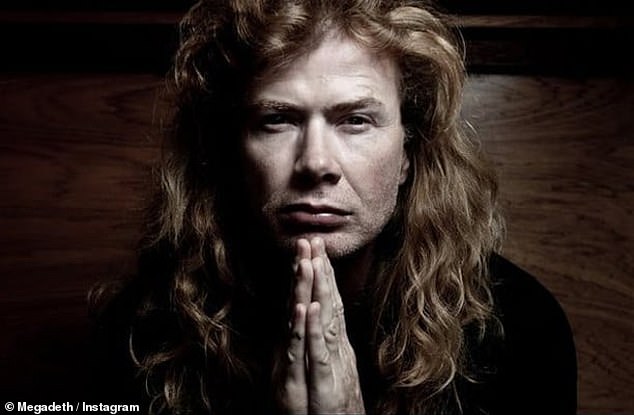 Problems in camp: Mustaine, 59, revealed the band already had a ‘strained relationship’ with Ellefson and that played a role in his firing

On his Instagram account, which has since been made private, Ellefson denied the allegations and maintained that the videos were ‘private, adult interactions that were taken out of context and manipulated to inflict maximum damage to my reputation, my career and family.’

The 56-year-old also added that the videos were released with ‘ill intention by a third party’ and that the woman in the clips was not underage at the time. The woman came forward in the statement and said she ‘was always a consenting adult’… and that it was ‘all consensual and all online.’

The news of the shakeup within the band comes just two weeks after Megadeth issued a statement on the situation.

‘We are aware of the recent statements regarding David Ellefson, and are watching developments closely. As it relates to creativity and business, we are all familiar with one another,’ it read in the May 10 post on social media.

‘However, there are clearly aspects of David’s private life that he has kept to himself. As this situation unfolds, it is important that all voices be heard clearly and respectfully. We look forward to the truth coming to light.’ 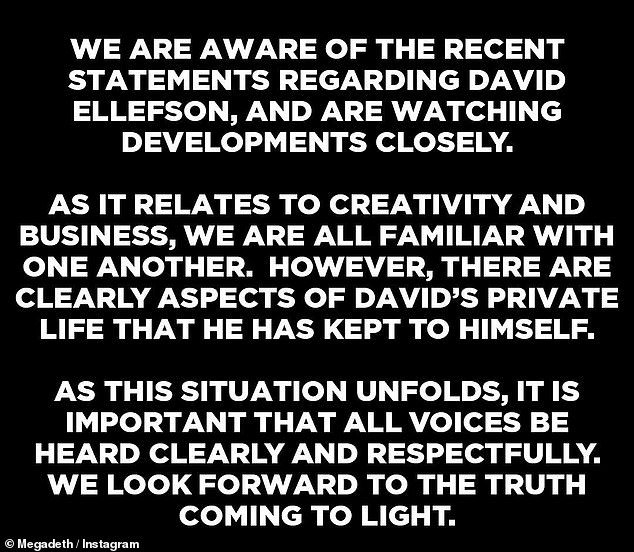 Previous statement on allegations: The news of the shakeup within the band comes just two weeks after Megadeth issued a statement on the situation on May 10 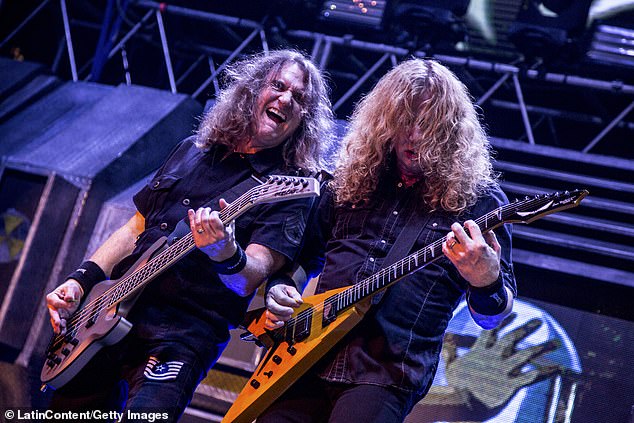 Co-founders: Mustaine formed Megadeth with Ellefson in 1983 after the guitarist-singer was fired from Metallica; the former bandmates are pictured performing in August 2016

Mustaine started Megadeth with Ellefson back in 1983 after the guitarist-singer was fired from Metallica due, in part, to his alcoholism, drug abuse, overly aggressive behavior, and personal clashes with founding members James Hetfield and Lars Ulrich.

But Mustaine would bounce back and realize massive success with Megadeth, and go on to become among the ‘big four’ American bands that helped bring thrash metal to the masses, along with Metallica, Slayer and Anthrax.

Ellefson was a member of the band for 19-years, until 2002, when the band temporarily disbanded, but eventually re-grouped without the bassist, who had taken legal action against Mustaine over back royalties. Ellefson settled out of court and eventually rejoined in 2010.

Back in January 2021, Mustaine revealed the band’s upcoming studio album had the provisional title – The Sick, the Dying… And The Dead! – but added that it could still be subject to change.

Ellefson became a Lutheran pastor more than 10 years ago, according to Blabbermouth, a hard rock website. He has been married to his wife, Julie Ellefson, for 27 years; they have two adult children, the website says.

Megadeth has sold 38 million records worldwide, while earning platinum certification in the U.S. for six of its fifteen studio albums. 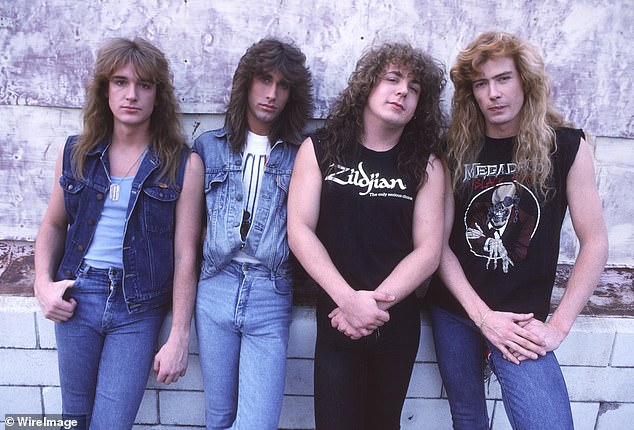 Original members: Mustaine and Ellefson were the only original members of the band from its inception in 1983 until its brief breakup in 2002; The rockers are pictured in 1987