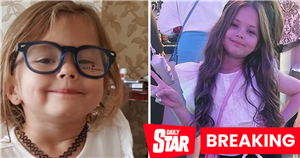 The country was shocked in August when news broke that the youngster was shockingly shot dead by a masked gunman in the family home in Knotty Ash, Liverpool.

The incident took place on August 22, and police had made several appeals to the city's criminal gangs to hand over whoever was responsibly.

Cashman, who has also been charged with two counts of possession of a firearm, was allegedly trying to hunt down convicted burglar Joseph Nee, who fled into the Pratt-Korbel household when mum Cheryl opened the front door having heard gun shots in the street.

Olivia was caught in the crossfire and was shot dead.

She was taken to Alder Hey Children's Hospital, but was pronounced dead.

The mum, who was holding her daughter as she died, was also shot in the wrist.

On Thursday, Merseyside Police said that Cashman, from the area had been taken in for questioning, and now they have confirmed that he has been charged with the murder – as well as attempted murder of her mum.

Another man, Paul Russell, 40, was also charged with assisting an offender.

During the press conference, DCS Kameen called for anyone with dashcam, CCTV or doorbell footage from that night to send it to them via their website.

“The investigation into Olivia’s murder is ongoing and we continue to appeal for people with information to come forward to assist us in bringing those responsible to justice.

So far, 11 arrests have been made, and police had offered a reward of £200,000 for information leading to the capture of the murderer.

Paying tribute to her daughter during the funeral last month, Cheryl said: “She had an answer for everything.

“There were many times I was amazed by the answers she would give back. I would have to remind her how old she was.

“Liv was loved and adored by everyone and she will never be forgotten. I will never say goodbye but what I will say is goodnight, I love you, see you in the morning.”

Despite the charge, the investigation continues.