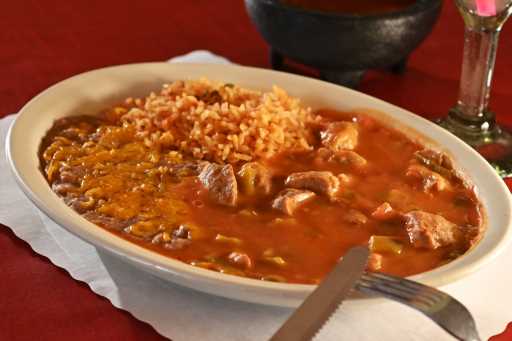 Editor’s note: This is part of our series, Hidden Gems, in which we take a look at those restaurants you should know about but may not. They are either tucked away in strip malls or otherwise off the beaten path. Try them out, and if you like what you eat, pass the word.

Sometimes, when describing something, it’s best to start with what it isn’t. Los Arcos, the giant, stucco-walled Mexican restaurant in Westminster, isn’t filled with gorilla-suited high schoolers diving off 40-foot cliffs. Its food will not make you want to eat before walking through its archway. And at Los Arcos, there is no mention of Black Bart nor his cave.

Maybe you’ve caught my drift; by making a comparison to our overhyped-of-late Casa Bonita, you glean — assuming you’ve somehow avoided Los Arcos yourself over the past 44 years — that this isn’t a run-of-the-mill Mexican eatery. It’s something special.

Los Arcos is, perhaps, what Casa Bonita strived to be: a Mexican restaurant first and foremost that isn’t eclipsed by its quirk, but rather enhanced by it.

Los Arcos is filled with curious portraits, curious music and curious décor. There is lore surrounding the margaritas, and don’t you want to go to a Mexican restaurant that has lore surrounding its margaritas? (Do they or don’t they add a splash of Everclear? Some things are better left unsaid.) When there’s a birthday in the house, there’s a cowbell and clapping. The staff is fantastic, the menu is large and the food is good. It’s the perfect place to take children, and yet, there aren’t many children there.

It began in 1978, when Ignacio Luevano was driving by a Spanish-style strip mall in south Westminster and saw the 20-seat center restaurant for sale. Using recipes from his native Durango, Mexico, he got cooking, and his wife Adela worked the register. Now, it’s their son John and his wife Kendra you’ll see running around, but it remains a family affair. Over the years, they took over the entire plaza, and the menu grew with the space.

A staple, though, has always been the green chile. The thick, spicy and, as is the Colorado way, not at all green, chile is still one of the restaurant’s best-sellers, as are the fajitas, whose sizzle is so frequent throughout the dining room that it almost counts as a soundtrack.

The tacaso is a nearly football-sized taco, deep-fried and stuffed with pork, potatoes, lettuce, tomatoes and red chile. If that’s not over-the-top enough, it’s then topped with cheese, a sour cream squiggle and a big heap of guacamole. Many plan their visits around daily specials, like Wednesday’s chicken capped in slightly sweet, but mostly savory, ranchero mole sauce.

Knowing that even classic restaurants need to change and adapt to stay relevant, John added several new menu items about a year ago, and they’ve been popular. The molcajetes — meat or seafood served in blazing hot volcanic stone bowls — have been especially well-received, and further add to Los Arcos’ sizzling soundtrack.

And then there are those margaritas, which are free (yes, free!) with dinner on Wednesdays. There are house margs, fruit margs, smoky margs, Italian margs and margs topped with little bottles of Corona. They are strong, which might contribute to the feeling that you’re in some sort of wacky alternate universe where it’s commonplace to see portraits of very serious-looking gentlemen (they’re members of the Luevano family), bull heads and bedazzled sombreros protruding from stucco walls.

But those oddities, coupled with solid Mexican fare, are part of Los Arcos’ lasting charm. It’s not boring, it’s not a gimmick and it’s entirely devoid of cliff diving gorillas. It’s a one-of-a-kind Mexican eatery deserving of more attention from a city obsessed with its quirky restaurants.

Subscribe to our new food newsletter, Stuffed, to get Denver food and drink news sent straight to your inbox.