The Minister for the Cabinet Office this afternoon outlined the Government’s ‘reasonable worst-case scenario planning assumptions’ for what could happen at the border when the Brexit transition period comes to an end in January.

He said that if large numbers of businesses are not prepared for new EU export paperwork then it could result in a queue of 7,000 lorries in Dover.

But he insisted it was not a prediction or a forecast but what could happen if preparations are not made and ‘if our neighbours decline to be pragmatic’. 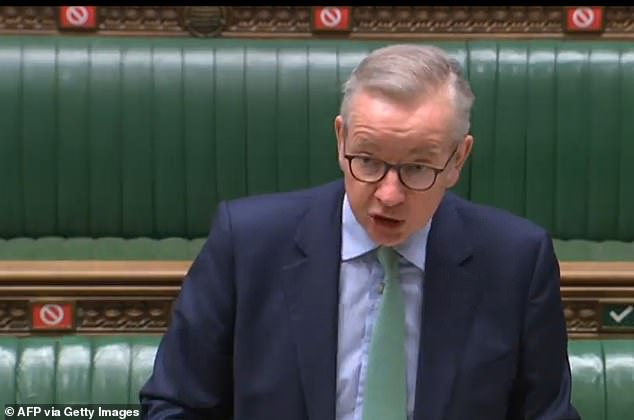 Mr Gove said work is ongoing to prevent such a scenario as he was told by Tory former Cabinet minister Damian Green that it would ‘send a chill’ through people who live in the south east of England.

Mr Gove said he hoped proposals to introduce a ‘Kent access permit’ would prevent such gridlock.

Speaking in the Commons, Mr Gove said: ‘That system has been developed, it’s being shared with business and we want to make sure that people use a relatively simple process in order to get what will become known as a ‘Kent-access permit’, which means that they can then proceed smoothly through Kent because they do have the material required.

‘If they don’t have the material required then it’ll be the case that through policing, ANPR (automatic number-plate recognition) cameras and other means that we’ll do our very best to ensure his constituents are not inconvenienced.’

Mr Green, the MP for Ashford, had told Mr Gove: ‘The prospect of 7,000 trucks queuing to cross the Channel will send a chill through my constituents because we know what effect that has on all the roads in Kent and it’s disastrous.’

Labour former minister Kevin Brennan also told the Commons: ‘7,000 HGVs parked end-to-end would stretch from this building to Dover. That’s the scale of the problem the Secretary of State is setting out.

‘Where are the 29 extra lorry parks going to be? His statement seems to be all about passing the blame on to business for the chaos being caused by his Government.’

Mr Gove denied this was the case and highlighted sites in Kent and at other locations where money has been invested.

He said: ‘Should there be specific areas of traffic management in Kent that we need to deal with, steps have been taken with the Kent Resilience Forum to do just that.’

Mr Gove’s ‘reasonable worst-case scenario’ was based on a significant number of businesses not being prepared for new border arrangements next year. 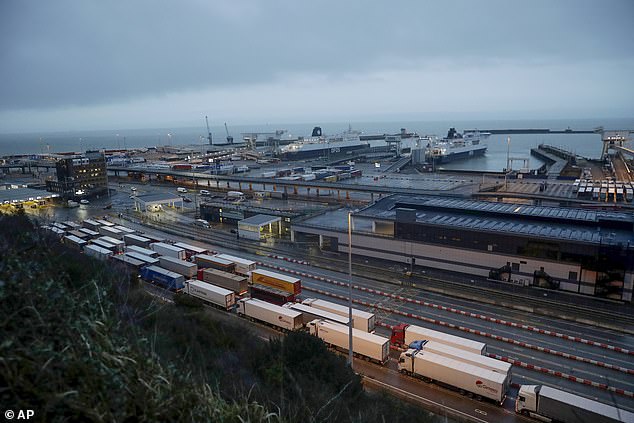 Mr Gove said that under a ‘reasonable worst-case scenario’ border chaos could result in a queue of 7,000 HGVs in south east England

‘In those circumstances that could mean between only 30 per cent and 60 per cent of laden HGVs would arrive at the border with the necessary formalities completed for the goods on board.

‘They’d therefore be turned back by the French border authorities, clogging the Dover to Calais crossing.’

Mr Gove said this could lead to queues of ‘up to 7,000 HGVs in Kent’, adding: ‘These queues and associated disruption and delay would of course subside as unready businesses who had their goods turned back at the French border would not want to repeat the experience.

‘But it is clearly far better that everyone is aware now of what is needed to prepare rather than to face additional disruption next year.’