Singapore: Just a few months ago, Taiwan was a global case study for success against the virus. The island had largely withstood the coronavirus and recorded less than a dozen deaths.

But after being hit by a shock surge, it is only now emerging from more than two months of partial lockdown as a “COVID-zero” cautionary tale.

People wear face masks to protect against the spread of the coronavirus and pray outside Hsing Tian Kong Temple in Taipei, Taiwan.Credit:AP

As its toughest restrictions of the global health crisis are finally eased on Tuesday, Taiwan is reflecting on what went awry from mid-May, when its pandemic death toll exploded from 12 to 786, and what the road ahead looks like.

Complacency and inadequate planning by the government of Taiwan’s president, Tsai Ing-wen, has been blamed for it losing control of the Alpha variant, which has largely been responsible for its worst outbreak.

At the core of that was a slow vaccination rollout not helped by late orders with manufacturers.

Even now, only 26 per cent of the population of 23.5 million have received at least one dose of a vaccine and just 230,000 people or 1 per cent have been fully inoculated.

“This is our bigger challenge,” said Professor Ih-Jen Su, the director of infectious diseases at Taiwan’s National Health Research Institutes. 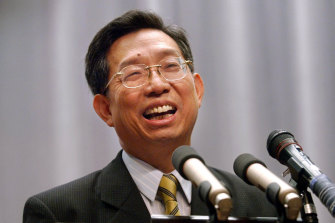 “In coming weeks or months hopefully we can increase the vaccination percentage.“

After the discovery of its first new infection for 2½ months on April 23, Taiwan’s shield rapidly gave way, with daily case numbers rising to beyond 200 before the alert level was raised in the capital Taipei on May 15.

The public has since endured 10 weeks of strict curbs, including the closure of schools, restaurants, bars and gyms, the mandatory wearing of masks outdoors and a ban on non-residents entering Taiwan.

With new cases falling from a peak of more than 700 to 12 on Sunday, restrictions are now being relaxed. But they are being wound back carefully as under-vaccinated Taiwan remains vulnerable to the Delta strain that has ripped through much of Asia.

Su, who led the Taiwan Centre for Diseases Control during the SARS outbreak and who subsequently initiated annual rehearsals for a possible pandemic from China, said if border control prevented the spread of Delta “it appears to be acceptable to taper back the control measures”.

“But after the 2003 SARS outbreak, people here in Taiwan find it easier to follow the government’s guidelines.”

While Taiwan was slow out of the blocks with vaccination, it has endeavoured to play catch-up. It last week added to its portfolio with an order for a further 36 million doses of Moderna but there has been help from outside government as well.

Two Taiwanese technology companies, Foxconn and Taiwan Semiconductor Manufacturing Co, have struck a deal to each buy 5 million doses of the Pfizer vaccine and donate them to the general rollout and a leading Buddhist group in Taiwan, the Tzu Chi Foundation, has added a further 5 million to the Pfizer order.

Japan has also donated nearly 3.5 million doses of AstraZeneca and the United States has pledged 2.5 million shots of Moderna while one of its two domestic vaccine candidates has in the past fortnight been approved for emergency use.

Su said it appeared now that Taiwan would have a sufficient doses of the vaccine, although not until after September when its supply would ramp up.

Having learnt the hard way from its mistakes, the island in the meantime plans to have 45 per cent of people administered with one shot by August, with 70 per cent of the population over the age of 65 now having the cover of at least one jab.

“I think we have enough now to cover the total population with two doses by December,” Professor Su said.