He wasn’t always ‘King in the North’: Would-be Labour leader Andy Burnham turned his back on Westminster after losing to Jeremy Corbyn but is now back centre stage in Covid standoff with Boris Johnson

He has been dubbed the King in the North, but Mayor of Greater Manchester Andy Burnham – today accused of holding the government to ransom over coronavirus – has not always wielded such power, despite a life in politics.

Burnham, who turned 50 in January, has been centre stage this week, earning himself the Game of Thrones-inspired nickname after demanding Boris Johnson’s Government pay up over their Tier Three plans.

He was born in Liverpool and has previously said he joined the Labour Party when he was just 14.

His first job was unpaid as a reporter for the Middleton Guardian, which ended acrimoniously when he claims he told his editor to ‘shove it’ after being made the ‘whipping boy’ 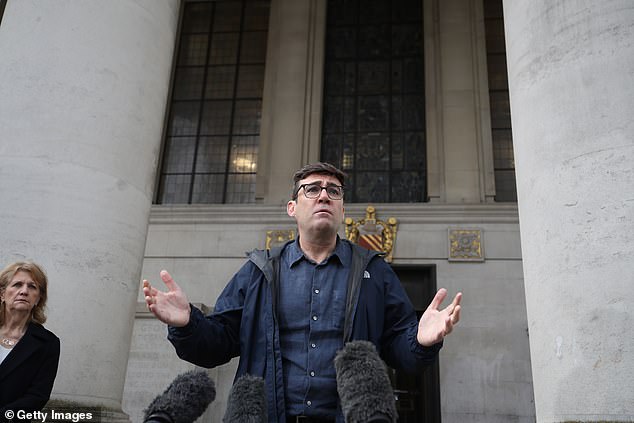 He studied at Cambridge University, where he met his wife Marie-France van Heel who he would go on to marry in 2000.

By the age of 24 he had turned to politics to become Tessa Jowell’s researcher and later became MP Chris Smith’s special adviser until 2001.

But it was the resignation of Leigh MP Lawrence Cunliffe which transformed his path from one on the sidelines to front of house.

Burnham was selected – and won – the traditional Labour safe seat, telling Labour Uncut: ‘I went up there, based myself there, knocked on every door of every member and won the Leigh nomination through grassroots campaigning.’ 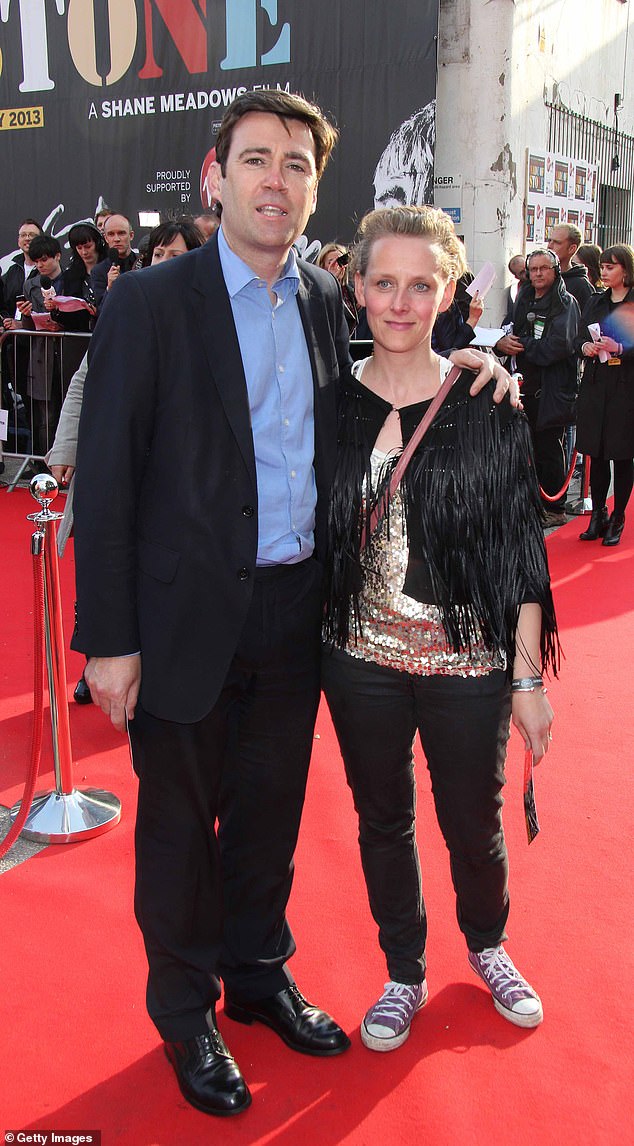 Andy Burnham and wife Marie-France van Heel before the ‘Stone Roses: Made Of Stone’ film 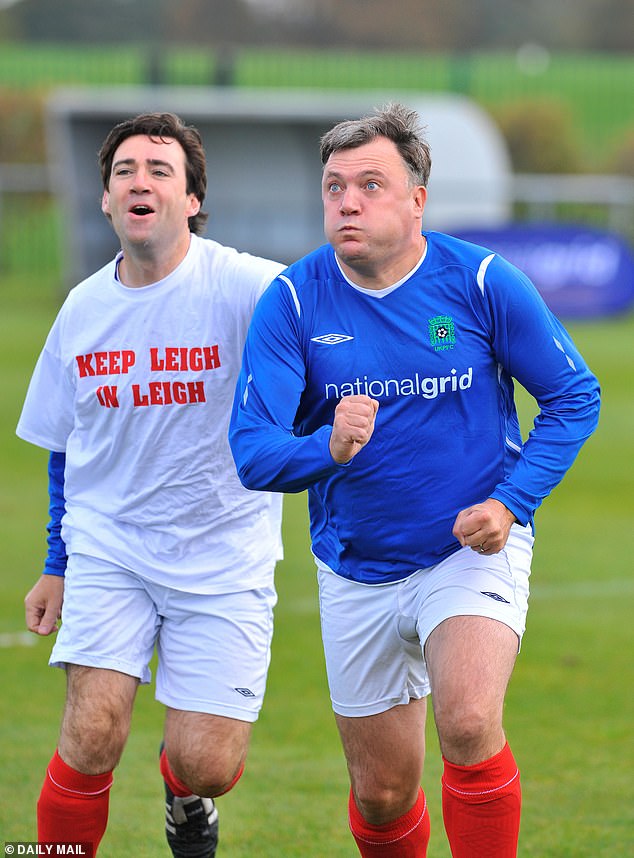 He was promoted in Tony Blair’s Government to Minister of State in the Department of Health then in 2008 under Gordon Brown to Secretary of State for Culture, Media and Sport.

That year he moved to apologise to the director of pressure group Liberty after claiming she had made ‘late-night, hand-wringing, heart-melting’ phone calls to then MP David Davis over terror legislation.

After being heckled at the 20th anniversary of the Hillsborough disaster he spoke to Brown about raising the tragedy in Parliament, which then led to the second inquiry.

His meteoric rise continued in 2009 when he was made Secretary of State for Health, but just a month in found himself at the centre of the Stafford Hospital scandal.

Hundreds of patients had died needlessly under appalling standards of care and Burnham’s handling of the subsequent investigation saw him heavily criticised.

His appointment of Robert Francis QC was not held in public and was limited in a way that infuriated relatives of the deceased. When Labour lost the general election, the Tories upgraded it to a public hearing. 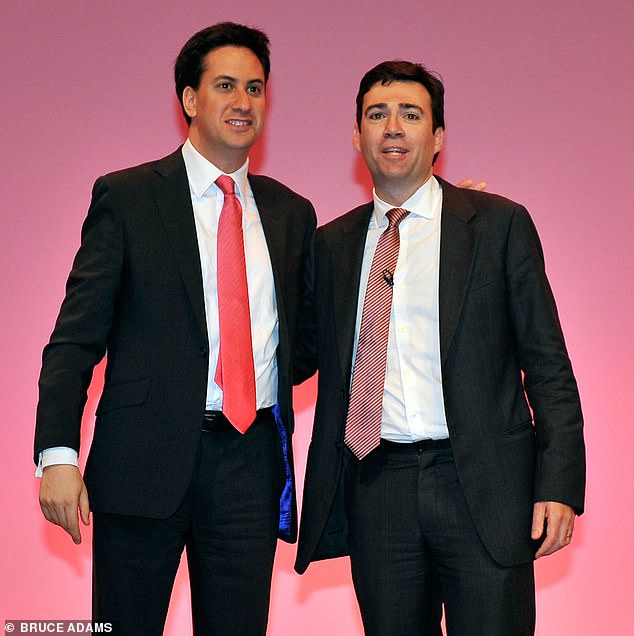 In 2010 he failed in a bid to become leader of the party, with Ed Miliband taking the position.

Again in 2015 he stood again for the top role and was this time considered as the frontrunner to win.

Campaigner Julie Bailey, who exposed the Stafford scandal, savaged the suggestion he could lead the Labour Party.

She said at the time: ‘We believe him to be a grossly unsuitable candidate. It would be a disaster for patients if he was ever to become Health Secretary again, let alone assume any higher public office.’

In the end Jeremy Corbyn unexpectedly won and Burnham became shadow home secretary, but he later admitted it had effectively ended his Westminster career.

It had been a disappointing end to a career that once him so well known he was forced to deny he wore make-up on his expressive eyes – features that once saw colleagues nickname him Bambi.

He told Trailblazer last year he had become disillusioned with national government after the leadership failure.

Burnham said: ‘It’s hard – especially being the front-runner – but nothing is a given in politics, hence why I fell out of love with Westminster. I was in this to change politics and knew if didn’t win then I wouldn’t stick around. In losing, although it was tough it did help draw a line under Westminster life, enabling me to have a clear sight to come home and focus on what I care about – North West England.

‘The defeat was bruising; leadership elections always are. Getting rejected from people you knew was tough, but it epitomised the shallowness of Westminster. I was always the loyal Labour person, a team player and thought it would serve me well but it didn’t come my way and it exposed the fickleness of politics at a national level.’

By May the next year Labour party officials in Greater Manchester had approached him to ask his thoughts on running in their mayoral election.

He agreed and resigned from his shadow minister role to concentrate on his bid for office in the northern city.

When a General Election was announced before the mayoral votes, Burnham did not stand as an MP – a decision time proved to have been the correct one. He left the Commons in May 2017.

He won the majority of the vote and his victory speech gave little doubt on his views on central government.

Burnham told supporters: ‘This is the dawn of a new era, not just for this city region but for politics in our country. It has been too London-centric for too long.

‘The old political and party structures haven’t delivered for all people and for all places.

“They have created this crisis in politics we are living through now. And you know what? We could hold as many general elections as we like and that will never solve the problem.’

Yesterday as he stood outside Manchester Central Library decrying Boris Johnson’s plans to put the city into Tier Three restrictions, his words could have come from the same speech.

With a rollercoaster career in politics spanning nearly three decades, only time will tell whether it will see this stance will see his star rise or fall.

Coronavirus is 'back with full force' in Germany, state premier says