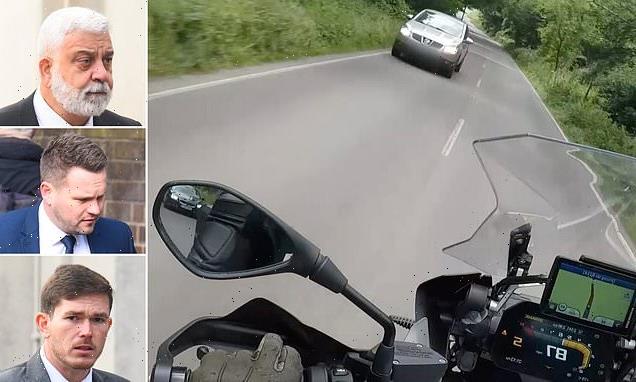 Three off-duty police officers have been slammed by a judge for riding their high-powered motorbikes at more than 100mph before two of them smashed into a car driven by an 80 year-old-man.

Sussex Police officers Ahmet Yapicioz, 55, Alan Harris, 33, and James Latter, 33, showed a ‘deliberate disregard for the safety of others’ as they rode at well over the 60mph limit ‘for fun’, Judge Richard Shepherd said.

Portsmouth Crown Court heard that Yapicioz – an officer of 18 years’ standing – smashed into the red Ford Fiesta driven by Raymond and Sheila Rear as they pulled out of a layby – before he ‘somersaulted’ over the handlebars.

Harris, a father-of-two, then crashed into the vehicle but was lucky to suffer less significant injuries than his colleague.

The shocking crash, which prosecutors say would have been prevented had the trio been driving at the speed limit, was captured on a GoPro camera attached to Yapicioz’s helmet.

The three officers did not plead guilty to dangerous driving until they were due to face trial last month at Portsmouth Crown Court, Hants.

They have now each been handed a nine month sentence, suspended for 18 months, and disqualified from driving for 18 months.

A judge said they should all be ‘thoroughly ashamed of themselves’ after causing the crash in south Chilgrove near Chichester on July 11 2020 at 1.20pm.

Roderick Blain, prosecuting, said: ‘They were riding their motorcycles on a number of roads east of Petersfield (Hants) driving towards Chichester through the hamlet of Chilgrove.

‘They were driving together keeping pace with each other.

‘An elderly couple, Raymond and Sheila Rear, had stopped in a layby to eat some food they had purchased shortly before in their bright red Ford Fiesta. 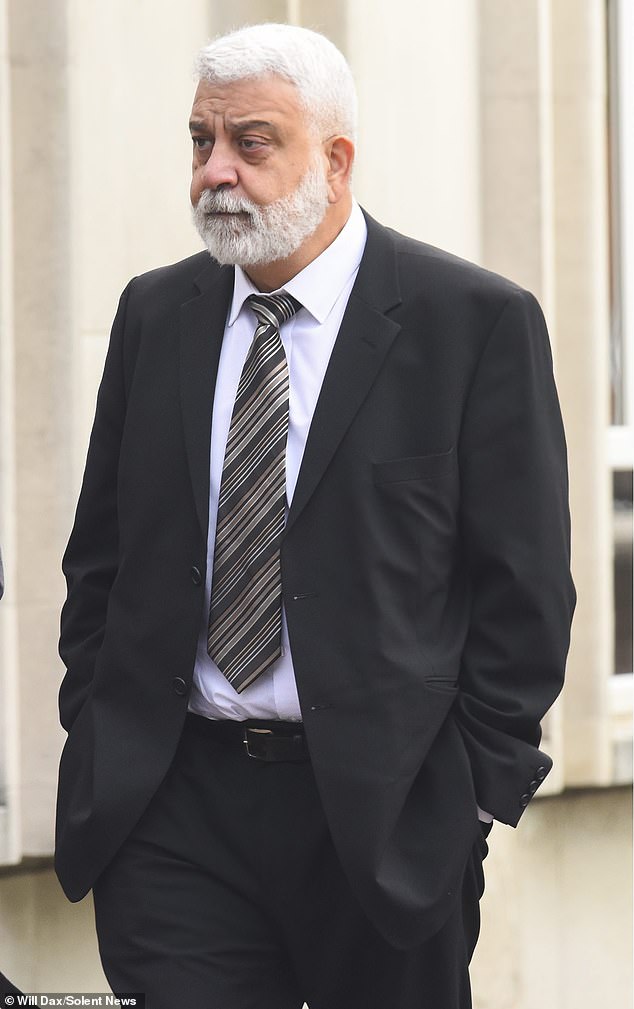 Ahmet Yapicioz, 55, a Sussex Police officer of 18 years’ standing, was seriously injured in the collision on July 11, 2020, in which both he and fellow officers Alan Harris and James Latter were convicted of dangerous driving 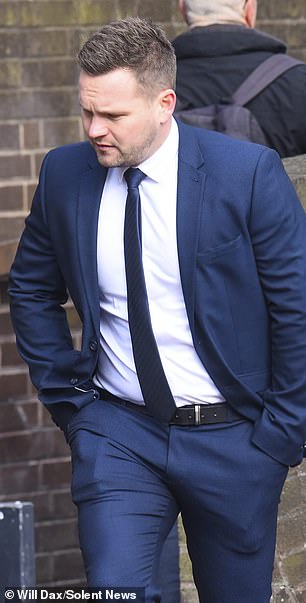 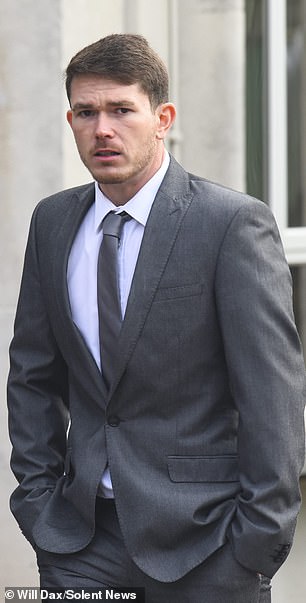 Alan Harris (left), 33, who was riding a Triumph Street Triple Index, has now retrained as an electrician, while James Latter (right), 33, has since sold his Suzuki GSXR motorbike which costs up to £11,000 and has vowed to never ride one again

‘They then came to leave the layby, heading back to Chichester, the same direction the motorcycles were travelling.

‘Yapicioz on his BMW motorcycle rode straight into the back of [the Ford Fiesta], followed by Harris.

‘[The couple] did not suffer any significant injuries, although both were deeply shocked by it.

‘Yapicioz suffered significant injuries, with Harris suffering lesser injuries. Latter was not involved in the collision.

‘Yapicioz had on his helmet a GoPro camera recording the collision and the run up to it. He somersaulted over and Harris then hit the car.

‘They were riding together socially. Yapicioz was above the speed limits for significant periods of the route. The other riders can be seen keeping the pace of the route.

‘Failing to take account of hazards [such as ‘slow’ signs] contributes to the dangerous driving.’ 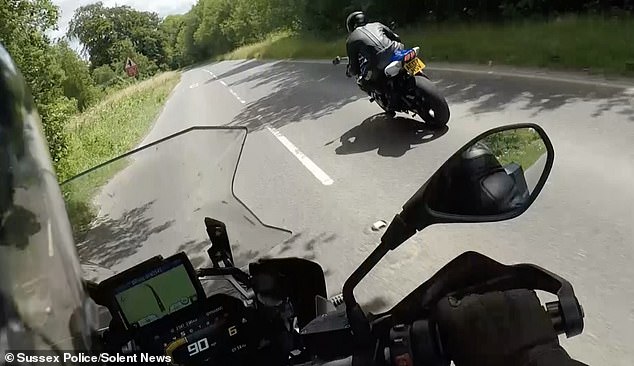 The court heard Yapicioz, riding a BMW R1200, was recorded as driving at speeds between 106 and 113mph which then reduced to between 53mph and 60mph before the collision.

Mr Blain continued: ‘If the BMW motorbike, Yapicioz, was travelling at 60mph, he would have been able to bring his motorcycle to a stop well before reaching the Ford Fiesta.’

The court was read a victim impact statement written by Mr Rear, who has since died. It read: ‘Since the incident happened, it has really affected me. I can’t get it out of my mind.

‘It’s the first thing I think of when I wake up.

‘We don’t want to drive past where it happened and it now takes us an extra four miles to get to our daughter’s address.’

His daughter, Deborah Glover, told the court he had been disappointed to learn they were police officers having worked alongside many during his time as a traffic warden.

Sentencing them together, Judge Shepherd said: ‘None of you showed any degree of good judgement and displayed behaviours that will inevitably cause your colleagues, friends and family to lose some trust in you.

‘You were involved in a road traffic collision but it could have been much, much worse, like those collisions I’m sure each and every one of you has been to, where you have had to brush the blood and gore from the roadway.

‘You are collectively responsible for the encouragement of the others.

‘It was prolonged bad driving, there was deliberate disregard for the safety of others. Although not showing off, it was your collective enjoyment that caused this to happen.

‘As police constables even when off duty you should be setting a very high standard of behaviour. The community will react with shock that three constables behaved in this way.

‘You should be thoroughly ashamed of yourselves.’

Latter has since sold his Suzuki GSXR motorbike which costs up to £11,000 and has vowed to never ride one again.

Harris, who was riding a Triumph Street Triple Index, has now retrained as an electrician.

Each must pay £500 in costs plus carry out 200 hours of community service.