PM said Northern Ireland stood to win big from his Brexit deal, despite pulling mainland UK out of EU market. 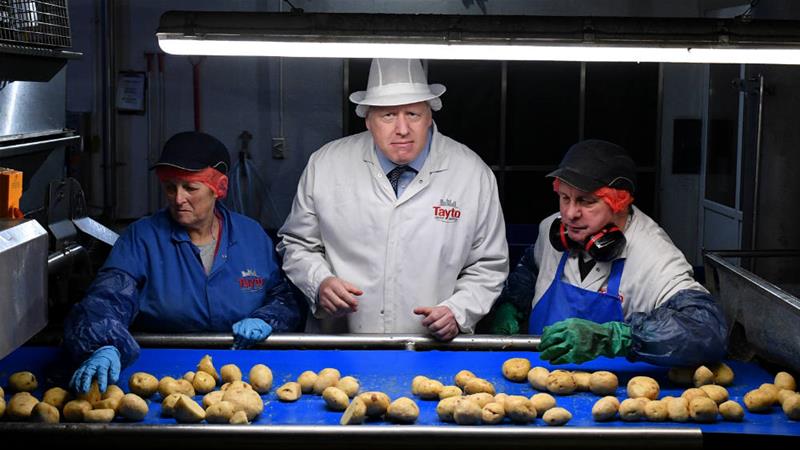 The UK prime minister has praised his withdrawal agreement as a “great deal” for Northern Ireland because it keeps “access to the single market” – despite wanting to pull the rest of the United Kingdom out.

Speaking to Conservatives in Northern Ireland, Boris Johnson talked up his exit terms with the European Union for its ability to keep single market access and free movement for Northern Ireland.

Johnson, in a video posted on Twitter by Manufacturing NI, said: “Northern Ireland has got a great deal. You keep free movement, you keep access to the single market but you also have, as it says in the deal, unfettered access to GB.”

The Liberal Democrats have criticised the PM following his comments for wanting to treat the six counties differently to the rest of Britain.

His Brexit deal with the EU will see Britain leave the single market and customs union but with Northern Ireland following different rules to prevent a hard border.

Most of the video (limited you 140 seconds) now uploaded pic.twitter.com/3VjJHu2CZJ

Tom Brake, the Liberal Democrats’s Brexit spokesman, said: “The single market and freedom of movement are a great deal – even Boris Johnson recognises this.

“So why isn’t he keeping them for the whole of the UK as part of the many benefits of EU membership?

“It is clear that the best deal for the UK is the one we have now – in the EU,” said the anti-Brexit politician.

Johnson also appeared to contradict evidence given by Brexit Secretary Stephen Barclay by telling supporters that goods between Northern Ireland and Great Britain would not face checks as a result of his Brexit agreement.

Barclay had told MPs that “minimal targeted interventions” would be required on some goods travelling between the two areas of the UK, due to Northern Ireland remaining aligned with Dublin and Brussels rules for the trade of goods.

But the Conservative Party leader said his government would “not enact such checks”.

“There will not be tariffs or checks on goods coming from GB to Northern Ireland that are not going on to Ireland,” he said on Thursday.

“There will not be checks – and I speak as the prime minister of the United Kingdom and a passionate Unionist.

“There will not be checks on goods going from Northern Ireland to Great Britain because we are the government of the United Kingdom and we will not institute or implement or enact such checks.

“And the idea that Tayto crisps from Tandragee are going to be vetted by some process, it is just nonsense.”

He also said that Brussels was forthcoming with a Brexit deal because European leaders feared the repercussions of Britain making the “irrational decision” to leave without a deal.

“Even though they could see what the Benn Act was doing to us and how difficult it was, they were not quite sure whether the UK government was going to be sufficiently irrational, as they saw it, as to come out with [no-deal],” he added.