Kamala Harris has shrugged off her previous criticism of Joe Biden as ‘a distraction’, using their first interview together to try and publicly bury the hatchet and move on from the contentious Democratic candidate debates.

Harris memorably attacked Biden for being against the busing in of students to white-majority schools, telling him: ‘That little girl was me’.

She clashed with him on his healthcare plan, and pressed him on why he took so long to end his support for the Hyde Amendment – which bars federal funding for abortion.

Yet on Sunday night she said a focus on their previous disagreements was irrelevant. 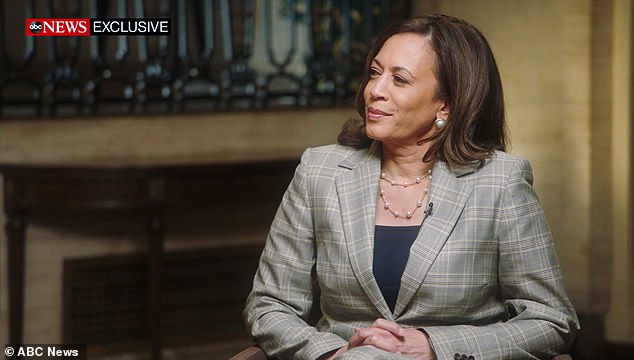 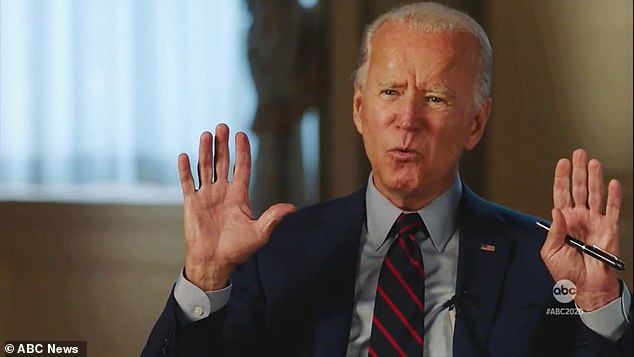 Biden, 77, said he felt the focus on their rivalry was part of the sexism pervasive in politics

‘We’re looking at a situation where the tens of thousands, hundreds of thousands of Americans have died in the last few months, where millions, tens of millions of people have become unemployed, and Joe Biden has not only a plan but a deep, deeply rooted commitment to take care of folks.

‘And there are so many of the priorities that he has that are shared priorities between us based on our collective life’s work.

‘And we certainly have one thing in common in this election, in addition to all the policies, which is: Donald Trump should not be president of the United States. And so that’s where I’m focused.’

He said that the focus on his and Harris’ policy clashes was sexism.

‘I think there is an inherently greater burden on women seeking the presidency than on men,’ he said.

‘I think there’s an inherent sexism that just pervades our politics.’

Discussing economic policy, Biden said he will raise taxes for those earning more than $400,000, but ‘no new taxes’ beyond that.

The Delaware-based political veteran said the Republican narrative about him planning to impose sweeping new taxes was incorrect.

He said 90 per cent of businesses were ‘Mom and Pop businesses’ employing less than 50 people, and vowed to help them.

Asked about the repeated attacks by Donald Trump on his mental health, Biden, 77, laughed.

‘Watch me. Mr President, watch me,’ he said.

‘I think it’s a legitimate question to ask anybody over 70. But what I say is: watch me.’ 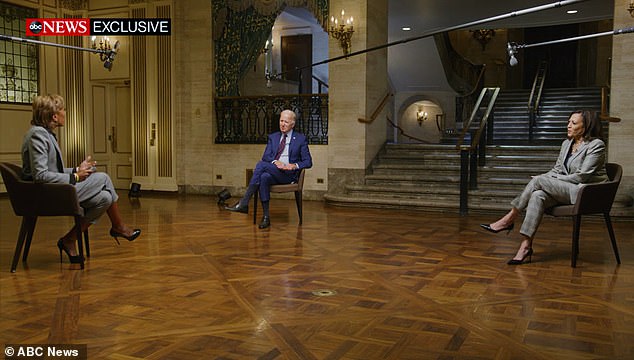 He also said he had no intention of being a one-term president, even though there are claims he intends to run as a ‘transition candidate.’

When asked by host David Muir if he only plans to serve one term, Biden replied: ‘No.’

‘You’re leaving open the possibility that you’ll serve eight years if elected?’ Muir asked Biden, who was officially nominated as part of the events last week to appear on the Democratic ticket.

And he said he was deeply concerned about Trump’s non-committal answers when it comes to respecting the election result.

Asked what he would do if Trump refuses to leave the White House, Biden said he did not think it would come to that.

He said: ‘I’m going to represent everyone whether they voted for me or not. That’s what presidents are supposed to do. I’m going to reach out to people.’

He said he wanted to ‘heal’ and ‘unite the country’.

He promised to bring his political opponents into the debate, to search for solutions to America’s problems.

On COVID-19, Biden was fiercely critical of Trump for not ‘listening to the science’ to save lives amid the coronavirus pandemic.

Biden said Trump was guilty of ‘walking away and not dealing with the solutions’ to COVID-19.

He said he did not blame Trump for the pandemic, but did blame him for responding by suggesting drinking bleach and resisting face mask orders.

‘This isn’t about freedom. It’s a patriotic responsibility to protect your neighbors,’ he said.

‘We cannot get this country moving until we beat the virus.’ 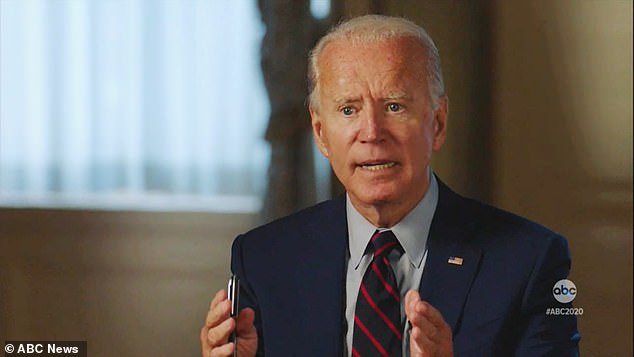 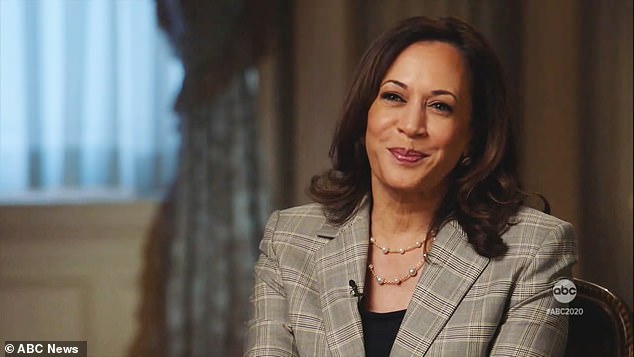 Harris, 55, dodged questions about her previous attacks on Biden during the primary debates

Asked if he would shut the country down again, if scientists recommended it, he replied: ‘I would shut it down. I would listen to the science.’

Biden said he had been ‘pleading’ with the president for ‘a plan’.

He said: ‘Somebody should be in charge of distributing the vaccine. It’s about a plan. How?’

Biden said he was convinced he could win the election without campaigning as Trump has, with mass rallies.

Biden pointed out that people – such as former presidential candidate Herman Cain – have died after attending Trump’s rallies.

‘It’s about being responsible,’ he said.

In an ABC News/Ipsos poll taken August 11-12, Biden had 40 per cent favorability and in the same poll taken August 21-22 – after the first-ever fully virtual Democratic National Convention – his approval jumped to 45 per cent.

Also before the convention, Biden had a net negative favorability rating, meaning more people disapproved of him than approved, a stat that has now flipped.

By comparison in the 2016 ABC News/Washington Post poll, then-Democratic candidate Hillary Clinton’s rating jumped 6 percentage points from before the convention to after.

One of Biden’s most passionate moments was when asked about Trump’s description of the neo-Nazi Charleston protesters as being ‘very good people’ on both sides.

‘No president has ever said that,’ he said, with a flash of anger.

Harris, 55, was asked about her attack on Biden during the debates, in a fiery row over racism. 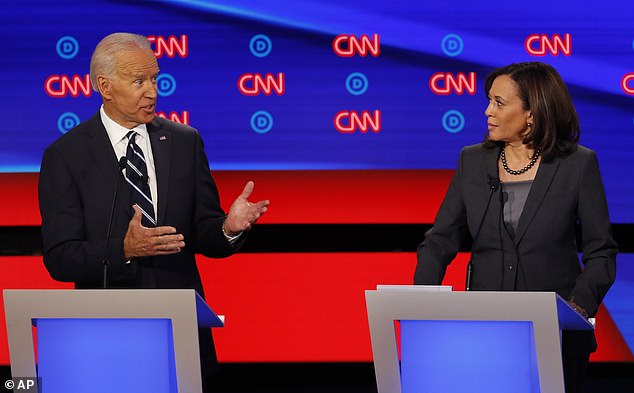 ‘What is hurtful to me is that black families own one tenth of the wealth of white families,’ she said.

She said it was ‘hurtful’ that systemic inequalities existed.

She said Biden had been a great vice president, and was her role model for how to do the job.

She dismissed the question of their previous debate stage rivalry as irrelevant, saying she was focused now on winning the election.

‘In terms of the bond that Joe and I have around the issues that are at play in this election, based on our personal experiences, and that being one of probably the most profound and important, which is the dignity of human beings and their right to have health care, and not have it be a function of how much money they have,’ she said.

‘Joe Biden and I are completely aligned on the goal. Making sure everyone has healthcare. We have both gone through that, on a personal level.

Harris said she was not proposing eliminating private healthcare insurance.

Biden added: ‘I don’t think we have any disagreement on the basic question of what we have to do as a nation.’

Biden admitted on Sunday night: ‘I shouldn’t have said that.’

Harris said: ‘Joe and I talk about, and frankly have talked about, over the years, but in connection with this race about the state of black America, he has a deep sense of awareness and knowledge about racial disparities, inequities and systematic racism.

‘So in this election, there is no question to me, that electing Joe Biden as president of the United States, means for the first time in the last four years having a president who takes on the issue of systemic racism and does something about it.’

Lates News:
2020-08-24
Previous Post: Rupee spurts 52 paise to over 5-month high on forex inflows
Next Post: Harry Maguire's trial over may be postponed because of coronavirus