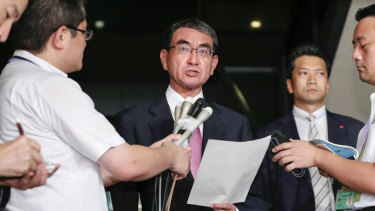 The government in Seoul had unexpectedly announced that it was ending its agreement with Tokyo which was set up to share information about North Korean nuclear and missile activities.

Abe said joint cooperation with the US would be unaffected and called on South Korea to "keep its promises."

Ties between the two sides began fraying last October when South Korea's Supreme Court ordered Japanese companies to compensate victims of forced labour during Japan's colonial rule of the Korean Peninsula between 1910 and 1945. 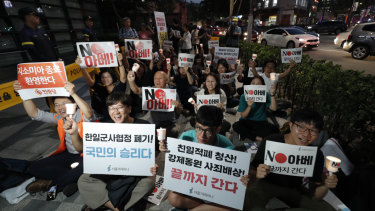 South Korean protesters react during a rally about the General Security of Military Information Agreement, or GSOMIA, in front of Japanese embassy in Seoul, South Korea.Credit:AP

The court ruling has escalated into a tit-for-tat trade dispute that further soured relations.

On August 2, it then approved plans to remove South Korea from a white list of trusted trading partners, sparking protests from Seoul.

South Korea said the move could hurt its export-dependent economy and followed by announcing its own plans to downgrade Japan’s trade status.

In its announcement that the intelligence pact would be abandoned, South Korea's presidency said recent trade restrictions imposed by Tokyo had done damage to their security cooperation.

The trade spat came as relations between the two neighbours have soured over South Korea's demands for compensation for their harsh labour for Japanese companies before and during World War II, an issue Japan says was settled under the 1965 treaty normalising relations.

Japan denies Seoul's allegation that the export controls were imposed as retaliation for South Korean court rulings allowing Japanese companies' assets to be seized over compensation for their wartime use of Korean labourers.

Bitcoin And Ethereum Not As Correlated As Everyone Thinks

These 3 Reasons Are Why Bitcoin's Price May Soon Explode Past $10,000

Bitcoin Price Tightens as Traders Prepare for a Second Shot at $9.2K

After a strong two week performance that saw Bitcoin (BTC) price rise from $7,700 to $9,200, the top crypto asset appears to be consolidating before […]

Regional Bank Stocks Look Set for a Move Higher in 2020

Harvey Weinstein arrives for opening statements in his landmark trial

What to Expect When Texas Instruments Reports After the Close