A 7.7 magnitude earthquake has struck south of Cuba and north-west of Jamaica on Tuesday. The quake struck shortly after 2pm local time.

The earthquake was originally rated as a 7.3 magnitude by the US Geological Survey (USGS).

However it was later upgraded to 7.7 magnitude, considered a major earthquake on the Richter Scale.

The earthquake was so strong shaking was reported as far away as Miami, Florida in the USA. 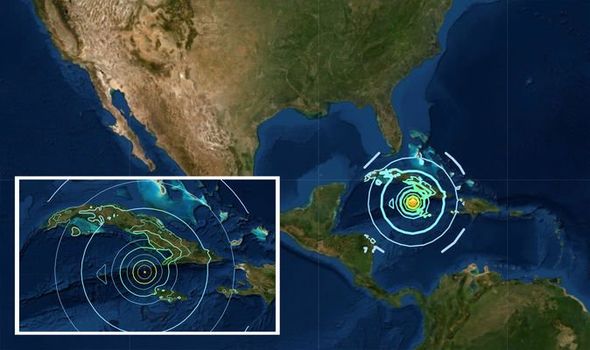 The epicentre of the earthquake was located 72 miles northwest of Lucea, Jamaica.

The extent of the damage or injuries is currently unclear.

Only 20 earthquakes of greater than 7 magnitude are experienced across the world every year.

Flights to Jamaica airports Kingston and Montego Bay have been temporarily postponed.

Is there a tsunami warning?

The US Tsunami Warning Centres has issued a tsunami warning for Jamaica, Cuba and the Cayman Islands following the quake.

According to the Pacific Tsunami Warning Center, tsunami waves as high as a metre are possible along some coasts of Belize, Cuba, Honduras, Mexico, Jamaica and the Cayman Islands.

The Pacific Tsunami Warning Center’s latest report noted “tsunami waves have been observed” and that “hazardous tsunami waves are forecast for some coasts”.

The notice also notes: “There is a signal on the gauge in the Cayman Islands but it is small and possibly not a tsunami but only background noise.

“We will continue to monitor until addiitonal information is received to confirm or end the tsunami threat.”

The International Tsunami Center also said: “Hazardous tsunami waves from this earthquake are possible within 300 km (186 miles) of the epicenter along the coasts of Jamaica… Cayman Islands and Cuba.”

This is a breaking story with updates to follow.