‘Hearing you’re going to die is odd’: ‘Broken’ ITV News presenter Gary Burgess reveals he has as little as six months to live in heartfelt message after being diagnosed with terminal cancer

An ITV News reporter has shared the desperately sad news that he is ‘going to die soon’ after receiving a terminal cancer diagnosis.

Gary Burgess, who reports for ITV News on the Channel Islands, yesterday told fans he has six to twelve months left to live after tumours between his heart and lungs had spread and were inoperable.

Mr Burgess has penned a heartfelt and honest blog charting his cancer battle, with positive, lighthearted and humorous posts about his treatment.

But there has been an outpouring of support and love from fans today after he shared the news that his cancer could no longer be treated.

He added: ‘It immediately washed over me like the most overwhelming sea of guilt to think that my husband is likely going to be alone at home without me. 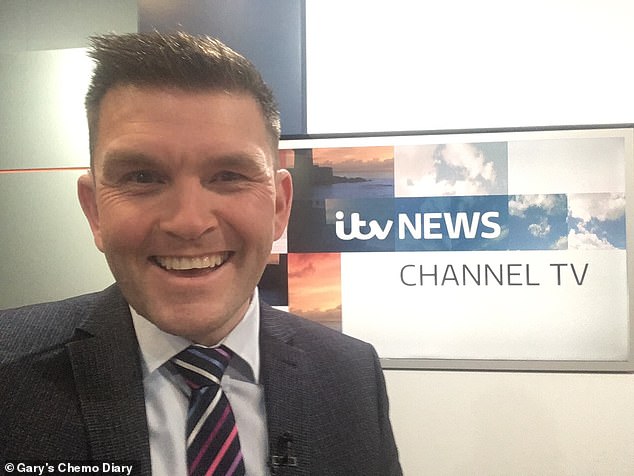 Gary Burgess, who reports for ITV News on the Channel Islands, yesterday told fans he has six to twelve months left to live

The star of ITV news was first diagnosed with testicular cancer in 1999 which spread to his chest and lungs but was treated with chemotherapy.

In 2015, new tumours were found in his lungs before being surgically removed, with more tumours taken out the same way a year later.

Writing in his blog, Mr Burgess revealed that a CT scan in October 2019 had found five more tumours which were treated with chemotherapy.

But on November 3, his oncologist told him his cancer was terminal.

Mr Burgess, who lives in Jersey with his husband Alan, presents news reports, writes a column for the Jersey Evening Post and hosts the local radio station Channel 103.

He wrote on Twitter yesterday: ‘Hello friends. This is a difficult post. I’ve always tried to be an open book about my health. Today some news I never expected to be sharing.’

Following it up on his popular blog, the 44-year-old penned: ‘Hearing you’re going to die is odd.

‘The nasties growing between my heart and lung that three months of ‘salvage chemotherapy’ had shrunk earlier this year have come back to life… They’re inoperable. There isn’t a treatment left to get rid of them.

‘I’m apparently unusual (I knew that!), with my oncologist seeing only one such case of this rare cancer each year.

‘There is a chemotherapy treatment that has the potential to add a few extra weeks, maybe months, to my life, but the trade off is the loss of quality of life due to the side effects of that chemo. Right now, I’m yet to decide whether to go for it or not.’ 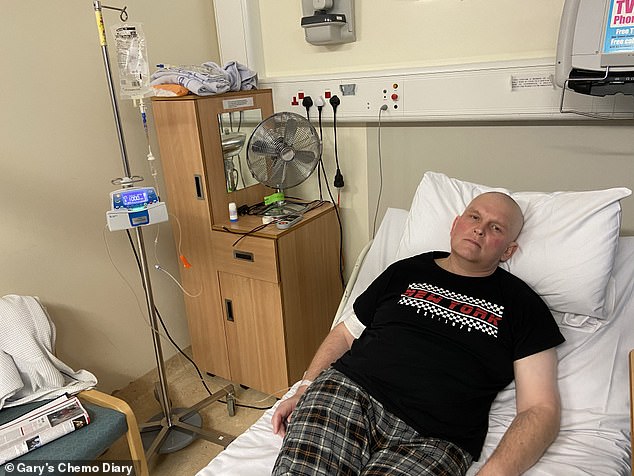 The star of ITV news was first diagnosed with testicular cancer in 1999 which spread to his chest and lungs but was treated with chemotherapy. Pictured, Mr Burgess during treatment

Mr Burgess added he and his husband had lost three holidays this year as a result of the Covid pandemic.

He added: ‘It’s a strange, other worldly experience, to think there may only be one more birthday, one more Christmas, one more wedding anniversary.

‘It immediately washed over me like the most overwhelming sea of guilt to think that my husband is likely going to be alone at home without me. Our holidays. Our watching telly on the sofa. Our weekend breakfasts.

‘It just feels totally unfair. For him. For me. And I know that makes me sound selfish. I don’t mean it like that.

‘The weirdest bit is that, deep down, I’ve sensed I am dying for around three months now. I just kept hoping I’d be wrong.

‘The doctors didn’t know as I only had the scan and other tests last week, but I knew I was dying.

‘I just didn’t have the words to describe it and I was determined to keep my best game face on as each day had become ever so slightly more difficult than the previous day.

‘But I smile my smile. I do my work thing. And when wonderfully kind people say nice things, especially ‘you look so well’, I cry a little inside, and outwardly I smile, thank them, and say ‘I’m plodding on’. It’s my way of trying not to lie to them while not burdening them with my woes. 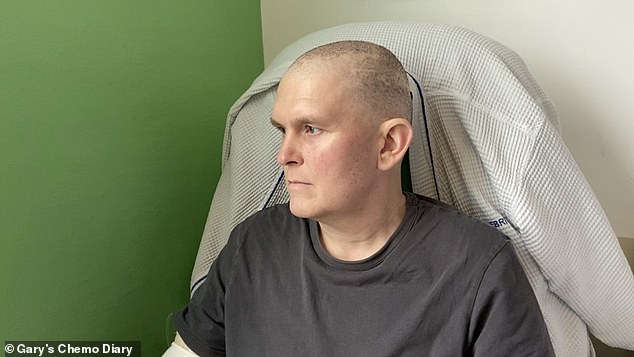 The reporter and writer has shared the story of his treatment with fans, via his blog

‘Do I transfer my savings to my husband’s bank account? What happens to those flight loyalty points I’ve got? Do I need to ring the tax office and let them know I’m dying?

‘Should I plan my funeral now? Do I want to be buried or cremated? What will dying feel like? How can I not exist any more?

‘I’ve Googled ‘what happens when you’re told you’re dying of cancer’ and I now know the results are rubbish.

‘Now my heart breaks at the prospect of the person I love more than any other in this world being cut adrift. It’s not fair on him. I feel like the worst husband ever, even though I know that’s just self-serving self-pitying silly talk.’